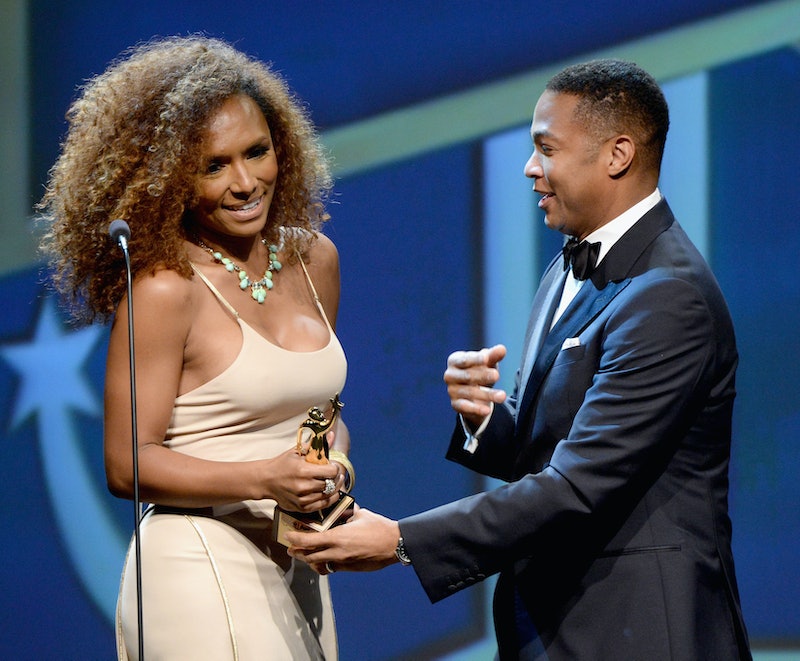 Last month, trans activist and writer Janet Mock had a painful interview with CNN's Piers Morgan, where Morgan repeatedly misgendered Mock and basically did everything an ally to the trans community shouldn't have done. When Mock expressed her disappointment on Twitter about the interview's "sensationalized" angle, Morgan launched into a never-ending Twitter rant in which he accused Mock of being disrespectful and complained about "cisphobia." Rather than trying to understand how his journalism was insensitive, Morgan repeatedly referred to himself as a victim.

Of course, this wasn't the first time that a journalist has been clueless when it comes to reporting on the trans community. Remember when Grantland 's Caleb Hannan wrote an article outing a trans woman, Dr. V? Or when Katie Couric asked Laverne Cox and Carmen Carrera intrusive questions about their genitals?

How about when Fox News played Aerosmith's "Dude Looks Like A Lady" while delivering the news about Chelsea Manning? Oh, and let's not forget the media's current obsession with Bruce Jenner and whether or not "he wants to become a woman," as some outlets have worded it.

All of which is to say that the media hasn't been doing the best job reporting on trans individuals, who certainly deserve better. So how can the media have an industry-wide transformation when it comes to reporting on the trans community? Here are some ideas.

Getting mainstream news outlets — from The Associated Press to the Washington Post to the New York Times — to change ethical guidelines or reporting policies on trans communities, may not seem, at first glance, like it would have a major impact. But updating ethical guidelines is definitely more than a symbolic gesture, GLAAD Director of News Ross Murray tells Bustle.

GLAAD provides its own media reference guide on its website, which is divided into sections such as "Offensive Terms To Avoid," "Defamatory Language," and "HIV, AIDS, and the LGBT Community." In one section, the media reference guide pays tribute to three major news outlets for their policies, stating:

The Associated Press, The New York Times and The Washington Post all restrict usage of the term 'homosexual' — a word whose clinical history and pejorative connotations are routinely exploited by anti-gay extremists to suggest that lesbians and gay men are somehow diseased or psychologically/emotionally disordered, and which, as The Washington Post notes, 'can be seen as a slur.' AP and New York Times editors also have instituted rules against the use of inaccurate terminology such as 'sexual preference' and 'gay lifestyle.'

Implementing the policies could slowly educate reporters and put a stop to misgendering, misusing language to describe the trans community, or sensationalizing trans identities.

"A standard policy also helps out because if a news outlet's reporter gets their coverage wrong, we can point back to the standard policy," Murray says.

What else can get news outlets to change? Listening to their audiences.

Take the Grantland story on Dr. V, for example. At first, many readers heralded it as a fine piece of journalism. But eventually, members and allies of the trans community poured in on Twitter pointing out the problems. Grantland's Bill Simmons ultimately had to publish a letter from the editor in response.

Outing Dr. V — and presenting her gender identity as a deception — was a mistake. But thanks to the criticism, it's also a mistake that many writers and editors will take care never to emulate again.

Similarly, when Chelsea Manning came out as a transwoman, several news outlets initially referred to her as "Bradley" and "he." Over the next few days, however, a few changed their approach — for example, NPR. Whether it was a result of public criticism or anticipation of it, the shift certainly came as a result of outside pressure, and it also made NPR look more progressive.

Thursday, NPR decided to use male pronouns and explained its decision to The New York Times. On Friday, NPR's Managing Editor for Standards and Practice Stu Seidel issued new guidance, saying that NPR's 'thinking has evolved' and that the network will honor Manning's preferences.

A New Generation Of Journalists

Camille Beredjick is a 2013 journalism graduate from Northwestern University who now lives in New York and works at a non-profit. But back in 2012, she was the editor-in-chief of the Medill Equal Media Project, a short-term project that a group of Northwestern students led during the 2012 election season. The purpose of the project WAS to thoroughly report on LGBT issues relevant to the election.

With each generation, journalism faces new questions, new challenges, and new opportunities to adapt. Just 24 years ago, editor Gabriel Rotello of OutWeek Magazine (a now-defunct lesbian and gay magazine) wrote an essay for The Newsletter on Journalism Ethics in which he chastised outlets for treating a dead man's hidden sexual orientation as "taboo," and argued that "outing" was necessary for the LGBT community's visibility. Twenty-four years later, most of us can now agree that outing a gay person is unethical, though we understand Rotello's argument given the historical context he said it in.

The same evolution may happen with the question of how to report sensitively on trans issues. As new generations of journalists pour in, the industry slowly changes.

A New Horizon For Sensitive Reporting On Trans Communities

After Jared Leto won his Oscar for Supporting Actor, NBC News Tweeted out the following:

Trans Twitter and its allies drew a collective gasp.

While saying "transvestite" instead of "transgender" or "transwoman" seems like a small mistake, the term "transvestite" had long been condemned by the several in the trans community as a slur, so NBC News' tweet was much more than a "slip" to the people who responded.