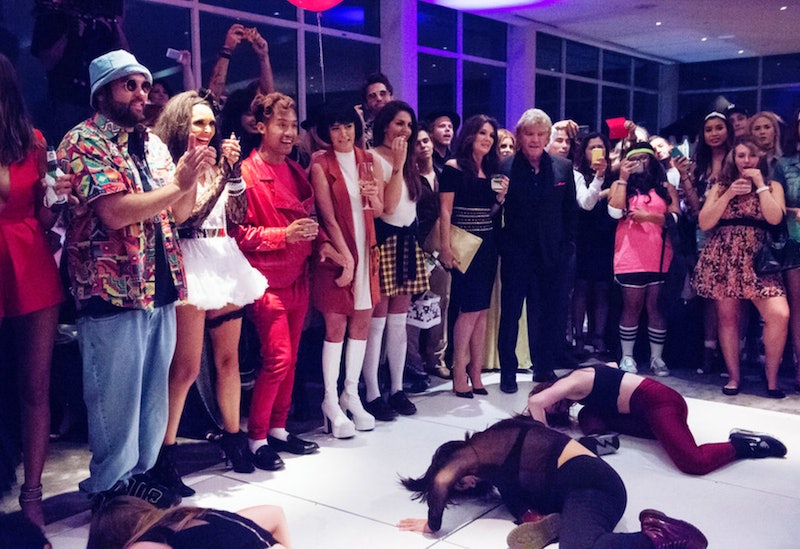 When "Raise Your Glass" started to play at the top of the Vanderpump Rules Season 4 premiere, my eyes literally welled up with tears. It's been a long seven months since Season 3 drew to a close. Sweet giggling Giggy, I am so happy that my favorite show is finally back where it belongs: on my television set. The fourth installment of the Bravo reality series kicked off the way any good season of Vanderpump Rules would: with a big soirée. A joint birthday party for Scheana, Erika (Scheana's mom), and Marie (Jax's mom), to be exact.

But that is not to say it was a boring evening. I mean, hi, we're talking about the SURvers here. Of course it was a thrilling evening. And this is partly thanks to Ariana. No, she didn’t do anything wild or crazy. No, she didn’t get blotto. And when Kristen rolled up to the decades theme party a) uninvited and b) without a costume, Ariana didn't pick a fight. Instead, she let her facial expressions do all of the talking. Her reactions are more or less works of art.

The first piece is called: Kristen Shows Up To The Party

Ariana spots the uninvited guest. She is not amused. She reacts accordingly.

A roller-skate-wearing Tom Sandoval takes over the dance floor. He performs a skate-dance routine. Kristen cheers loudly from the sidelines. Ariana notices. Ariana does not appreciate it. She reacts accordingly.

Lisa Vanderpump tells Kristen that her behavior could cost James his job at SUR. The conversation is awkward. Kristen gives Lisa a proper goodbye peck on the check. The two go their separate ways. Ariana has been lurking in the background the entire time. She reacts accordingly.

And this is: Kristen & Lisa Vanderpump Say Goodbye, Part III

Ariana is not quite ready to move on. Neither am I. Congratulations, Ariana! You and your perfect reactions win the evening.