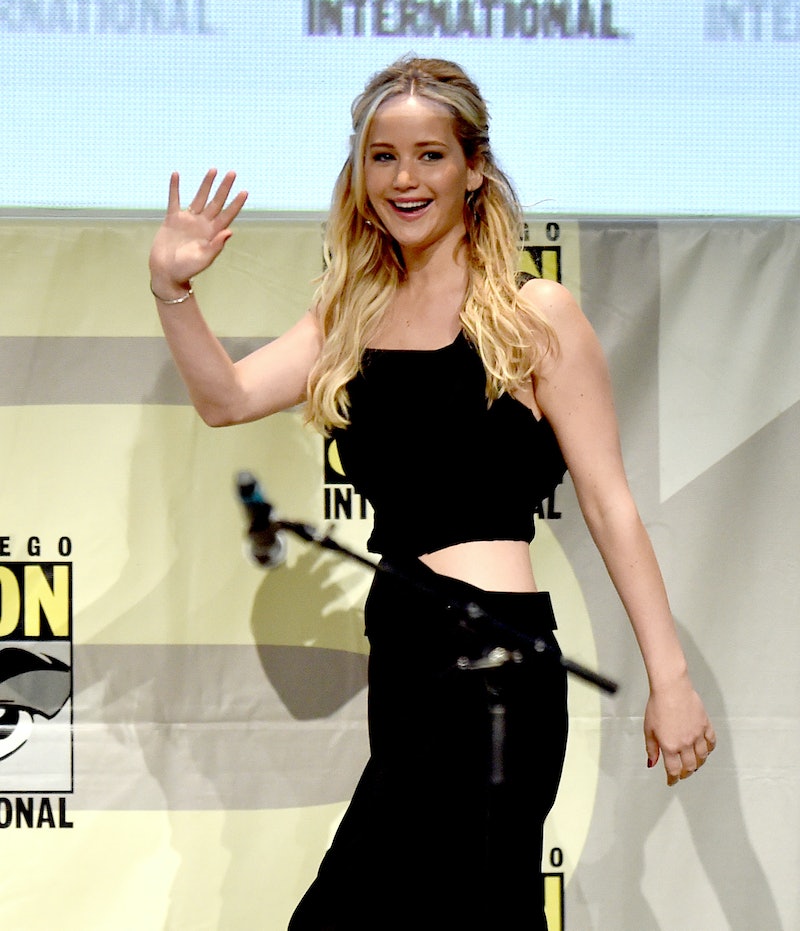 With the final installment of The Hunger Games franchise hitting the multiplex on Nov. 20, I was fairly certain that we were going to see one of our favorite millennial girl crushes walk (or fall!) the red carpets of the film's global premieres in fabulous Dior dresses. So when actress and Dior spokesmodel Jennifer Lawrence rocked a shaggy, blonde lob at the ceremony in Hollywood in which she and the film's cast left their hand and footprints, she threw me for a loop!

But she also left me wondering if and how she will be switching up her hair while she promotes the film.

The actress went platinum blonde earlier this fall and the white hot shade was gorgeous on her. I am glad that she is revisiting it.

J. Law turned up at events, like the Met Gala in the spring and at Comic Con this summer, with longer, more golden locks, which were likely extensions. But she didn't keep the length for long.

She is now rocking an asymmetrical, shaggy lob with tons of depth and dimension.

It's choppy and loaded with layers and it's more fun than the pixie that she had in early 2014.

Here's why her shaggy, chunky lob is so fab.

It's glorious and fabulously messy. It also looks natural.

It also has a nice bend to it.

It hugs her head and frames her face.

It's bright and white hot.

It's versatile. While J. Law opted for a deep side part at this event, she could change things up by going with a center part or by slicking it back. See, short hair, especially a lob, isn't snoozy.

But it's not too, too short, either! The way it lays makes it appear even longer.

It's a fun shape, too. It's imperfect, which makes it that much more charming.

While she chose to go with thick waves and some bend for this ceremony, she could easily blow it stick straight or scrunch it up even more.

ICYMI, she went with long, layered locks in the summer. She wore them straight.

The actress also wore them in a cascade of beachy waves.

Right now, I am feeling Lawrence with the shaggy, shorter, and platinum lob. She stands out more so with the white shade and the piece-y texture. Ah, what am I saying? She could totally shave her head and be as much of a girl crush as ever.

More like this
Jennifer Lopez Wore A Naked Dress To The Shotgun Wedding Premiere
By Dominique Norman
9 Valentine's Day Hairstyles For 2023 That Look So Dreamy
By Audrey Noble
Blake Lively Debuts Red Hair For The 'It Ends With Us' Film Adaptation
By Olivia Rose Rushing
The Best Beauty Looks Spotted At Paris Couture Week 2023
By Audrey Noble
Get Even More From Bustle — Sign Up For The Newsletter
From hair trends to relationship advice, our daily newsletter has everything you need to sound like a person who’s on TikTok, even if you aren’t.