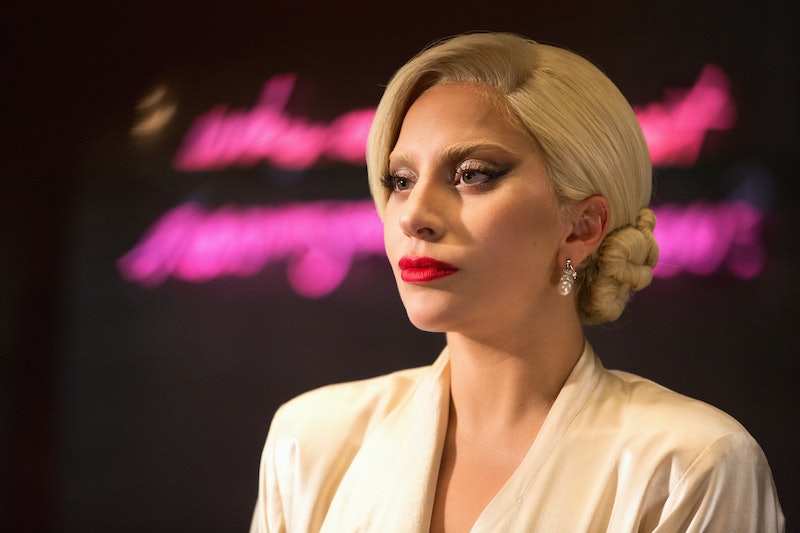 While it's pretty much common knowledge now that every season of American Horror Story is connected in one way or another, the details behind those connections still remain somewhat of a mystery. However, as we delve further into each season, more and more details start to emerge and American Horror Story: Hotel is no different. In fact, recent photos have come to light that show Lady Gaga's character The Countess looking pregnant on the set of AHS: Hotel in what appears to be 1920's-era clothing. Adding further fuel to the fire, the images were also taken just outside of Season 1's iconic Victorian mansion, indicating that Lady Gaga's Countess shares a significant tie to this haunted establishment. But how do these pieces all fit together? One theory suggests that The Countess is connected to the Murder House Infantata storyline.

I mean, just consider what we know about Murder House's backstory. It was built in 1922 by Dr. Charles Montgomery, who at the time was considered to be "a surgeon to the stars," however, when his drug habit threatened to cramp their lavish lifestyle, he began performing illegal abortions in the basement for some extra cash. So taking that into consideration, it's entirely possible that The Countess came to Dr. Montgomery for that exact purpose. Perhaps she too was looking to get an abortion. This could also explain The Countess' interest in collecting young blonde children whom she considers to feel neglected. Maybe it's all part of some residual guilt she feels.

But what if the tie-ins don't just end there? What if her vampiric "virus" is what helped to actually create Murder House's Infantata? Because, as we all know, Dr. Montgomery's side business eventually came with a price when one of his patient's boyfriends learned about what he was doing and exacted retribution by kidnapping and dismembering the Montgomery's own son, Thaddeus. Stricken with grief, Charles went mad and used whatever body parts he had lying around in the basement to put his son back together again. This included giving him the "beating heart from one of our girls," which I assume means one of the fetuses he removed from a recent abortion patient. Could it be that the recent patient was none other than The Countess herself?

Gaga's character looks pretty far long in these photos, which could indicate that the unborn child would have a pretty strong heartbeat. So if that heart was then placed into Thaddeus' Frankenstein-esque body, then it could be argued that Infantata is really The Countess' son. And remember how the child ended up bitting Nora Montgomery when she tried to nurse him — almost as if he had a craving for blood rather than milk? That sounds awfully familiar in regards to this season's "virus" storyline. And if The Countess had already contracted the virus at some point during her pregnancy, then odds are that her baby was also carrying the virus within its blood stream when its heart was placed inside of the Montgomery child. That would certainly explain his sudden craving for blood.

But just in case you're still unsure if there's any real weight behind this theory, Reddit user theahsfan recently posted photographic evidence that Matt Ross (who played Dr. Charles Montgomery) will be guest starring in that very same role on Hotel later this season. Clearly these two characters are going to cross paths at some point. And based on all of this evidence, I have a feeling that Infantata will be the glue that brings their opposing storylines together.

Heck, Infantata could even be the thing that's being kept in Room 33. After all, that creature isn't a ghost and wouldn't be limited to the confines of Murder House like all the others. Perhaps his mother finally came to collect her child and has been looking after him ever since. Kinda takes the term "Mama Monster" to a whole new level, doesn't it?