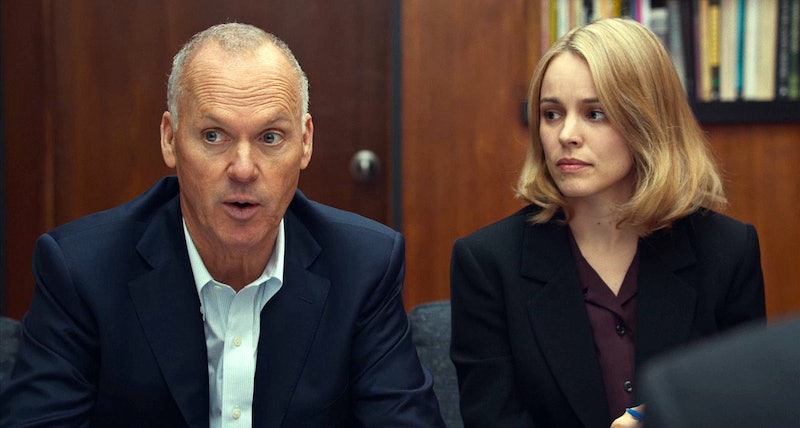 It's the end of the year, and that means we've officially entered prestige film season. Around this time every year, studios unleash their movies that they think have the best shot at winning an Oscar or two. 2015 is no different, and one film that's generating lots of awards buzz is Spotlight. The film boasts an all-star cast consisting of Michael Keaton, Rachel McAdams, John Slattery, Stanley Tucci, and Liev Schreiber, and tells the true story of The Boston Globe 's "Spotlight" team's investigation into the Catholic Church's sex abuse scandal in Massachusetts in the early 21st century. Like any film about real, living people, one has to wonder what the real Spotlight reporters think of the movie, particularly their on-screen depictions.

From what's been seen so far, the journalists all seem to love the movie. There were four main investigators involved in the real life Spotlight story who won a Pulitzer Prize for their work: Reporters Michael Rezendes (Ruffalo), Sacha Pfeiffer (McAdams), and Matt Carroll (Brian d'Arcy), and editor Walter Robinson (Keaton). Rezendes, Pfeiffer, and Robinson, in particular, have all been very vocal of their support for the film, and have even taken to practically aiding in its marketing efforts in unofficial ways. Each of the three wrote an essay for The Globe about what it was like to have these huge actors playing them in a Hollywood movie, and all three seem pretty enamored with the experience.

Then there's the fourth member of the main team, Carroll. He's played by a much lesser-known actor than his former colleagues in Broadyway vet d'Arcy, and therefore hasn't been talked about as much leading up to the film's release. However, that doesn't mean that Carroll's not a fan. In a recent interview with Boston.com, Carroll revealed the reason he's not promoting the film as much as the other reporters is because he no longer works for The Globe like the three of them do, so he doesn't see that it's his responsibility to hype a movie about it. However, he said that he still enjoyed the movie. He loved d'Arcy's performance as him, and said that he was "blown away" by the film. He especially enjoyed how they managed to make his job, which was compiling data, look exciting. "They actually made making a spreadsheet, which is unbelievably dull and boring... a sexy thing," he said.

Other real life people portrayed in the film have also offered their praise, like Ben Bradlee Jr. Bradlee was the managing editor for the Spotlight team, and he's played in the film by Slattery. He's been a fixture at screenings for the movie, and at the film's Brookline, Massachusetts premiere, he stated his own lofty hopes for the good the film can do. "We hope the movie gives victims the courage to come out and tell their story," Bradlee told CBS 4 Boston.

Also featured in the movie is former Globe editor Marty Baron (Schreiber), now with The Washington Post, who has seen the film at least three times and has cried at every viewing. He considers the movie to be a very important one in his field of investigative journalism. "I think it’s a love letter to investigative journalism and to local journalism,” he told Variety. “It speaks to the impact we can have if we devote the energy and the resources to difficult work. It’s kind of a reminder of our highest and most important mission." He's also been especially flattered with Schreiber's heroic depiction of him, and even joked, "A Jewish superhero! First one ever!"

At least according to the reporters portrayed in the film, Spotlight does a great job of telling the truth. Which, frankly, is exactly what a movie about journalism should do.