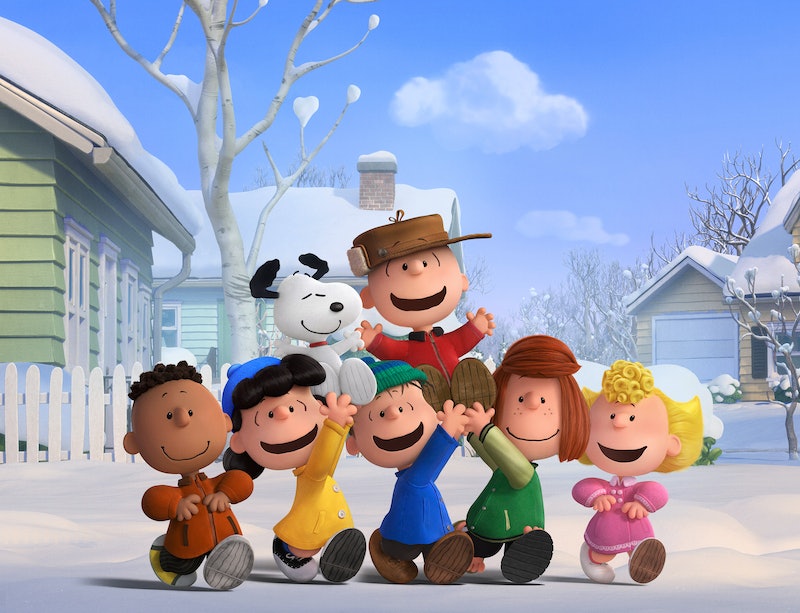 When it was announced that there would be a movie based on Charles Schultz's treasured "Li'l Folks" cartoons, The Peanuts Movie , I was thrilled. I grew up with the Peanuts gang, and I loved them all. There was something so enjoyable about watching and reading about the lives a tight-knit group of friends and a charming dog. I think one of the main things that drew me to the gang was the fact that they were normal, everyday kids living a life very similar to mine as a child. They went to school, they played outside with their friends, and they were subject to the "WAH! WAH! WAH! WAH!" yammerings of adults. Charlie Brown and his friends had the same issues that I had to deal with — and surprisingly, a lot of them are relevant today as an adult: insecurities, relationships, following your hopes and dreams.

As a child, I found solace and happiness when reading the comic strip created by Schultz. I found an even greater joy when specials like It's The Great Pumpkin, Charlie Brown aired. So it's no surprise, then, how excited I was to see The Peanuts Movie, a modern take on a classic I adored — but after watching it, my view of the entire Charlie Brown universe has totally, irrevocably changed.

Don't get me wrong, it's not because I didn't like the movie. I actually really enjoyed it; The Peanuts Movie made me smile and, at times, even brought tears to my eyes. It was sweet, warm, and brought out the dreamer in me — but to get to that point, I had to come to a couple of realizations about Charlie Brown and his so-called "friends." You see, I've always known that Charlie Brown was an underdog — and that's what made him lovable. He was always down on his luck, but persevered no matter what. He didn't let his "good grief" get in the way of his goals. That being said, I never knew how much of a punching bag he was to his friends until I saw this film. Throughout the movie, I watched him get used and abused by the people who claimed to be his pals, and it really made me feel for the kid.

Let's start off with Charlie's sister, Sally. She acts like a your normal little sis. She doesn't really recognize her brother's existence, but when she does, she nags him. In the movie, Charlie tries to get the attention of the Little Red-Headed Girl, so he does his best to ace a standardized test. As luck would have it, he gets the highest score in the class (spoiler: we later learn that this is a mistake). This makes him the most popular guy at school, and he hopes it'll impress the Little Red-Headed Girl. But during this time, Sally capitalizes on her brother's fame by selling merchandise with his "brand identity" all over it. She rides the coattails of her brother's fame — using him to make a buck for herself. Basically, she is a selfish moocher. She could at least share the profit with her older brother, but instead, she keeps it all to herself.

Then there is Peppermint Patty. Every time she refers to Charlie as "Chuck," there is something very condescending about her tone, and it's clear she thinks he's a total nerd. I get the feeling that Patty thinks she is superior to Charlie and can bulldoze all over him — and don't even get me started about how she treats Marcie.

Finally, there is Lucy, the worst of them all. Everything about the way she treats Charlie Brown makes her a monster. She insults him, demeans him, and aims to see him fail at everything he does. Charlie does nothing to deserve this; Lucy just torments him to feel better about her own life. She's a smug kid who is a textbook example of a bully — and she is always pulling the football out from under him right before he is about to kick it. Seriously, who does that?! All I have to say is that karma better get the best of her one day.

Of course, not all of the people in Charlie's life are horrible. There's Linus, Charlie's ride-or-die BFF. Sure, he still carries around a security blanket, but if you look past that, he is an honorable guy. Throughout the movie, he gives Charlie sage advice on how to handle his hardships, and he spouts quotes that are unexpectedly deep and highly intelligent. He is an oracle of philosophical musings — and having him as a friend makes Charlie a better, stronger person.

There's also Snoopy. He's not a regular dog. he's a cool dog. He actually thinks he is human, and he imagines that he can fly his doghouse around like an airplane. Yet no matter his eccentricities, Snoopy loves and supports Charlie Brown unconditionally. He truly epitomizes "man's best friend."

Perhaps that's what makes Charlie Brown the good, lovable person he is. No matter what crap his so-called pals throw his way, he doesn't let it get him down. He forgives them and moves on. Like Snoopy, he loves his friends regardless of their flaws, a quality that everyone should have, and it's the biggest takeaway from The Peanuts Movie. Even so, I couldn't handle someone like Lucy treating me as badly as she treats Charlie. I have it out for that kid. Perhaps if there's a sequel, she'll get whatever revenge is most certainly coming her way.