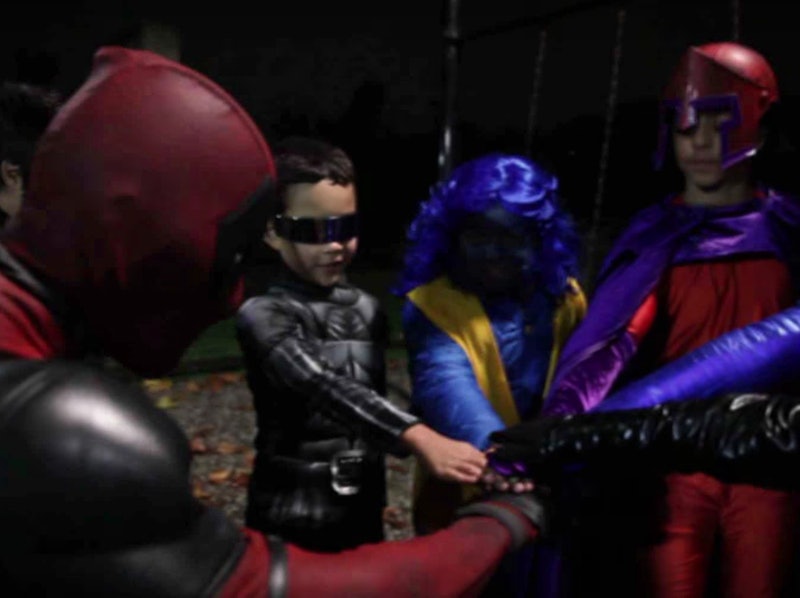 Ever since we first saw Ryan Reynolds as Deadpool in a teaser for the upcoming Deadpool movie, there was something fresh and unique about his character. The action genre has a long and glorious legacy of good-looking men playing heroes with noble intentions, and there's definitely entertainment value in that. However, Reynolds' anti-hero is a spin on the expected and it's a perfect way to breathe new life into the traditional superhero mold. When he stepped into character on Halloween, I was reassured that Reynolds as Deadpool is like nothing we've seen before.

If you remember the first teaser, then you know that Reynolds' character is crude, sarcastic, and totally hilarious. And, no, he doesn't tone it down (that much) when hanging out with kids. In a video filmed on Halloween night, Reynolds is clad in his Deadpool costume, joining forces with kids who are also dressed as superheroes. He asks the hard-hitting questions, like "How many of you have taken a human life?" and "What's your superpower?" While the kids seem understandably wary of Deadpool, the video shows just how into character Reynolds can dive — especially when things are unscripted. As a bonus, the kids throw down a couple one-liners that mock Reynolds' infamous role as the Green Lantern.

While the red band trailer confirmed the movie will be pretty violent, it also showed that this will be a totally new spin on the genre. It's a brave move to depart from a tried-and-true formula, but Reynolds going off-script in this Halloween video reassures me that the actual movie will be great. We rarely get to root for the anti-hero, yet Reynolds is already proving that we'll be on his side. We'll know for sure when Deadpool hits theaters on Feb. 12, 2016.