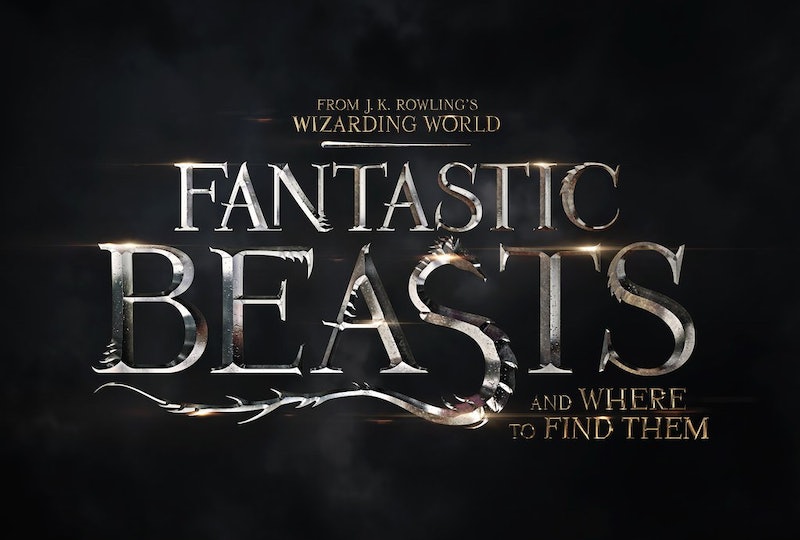 If you're a Harry Potter fanatic like me — and let's be honest, if you're a lady or gent of good taste, you probably are — then you were definitely psyched to learn that the wizarding world hasn't completely left us. In fact, it's coming back in a big way in the form of Fantastic Beasts and Where To Find Them , the story of writer Newt Scamander's New York community of witches and wizards and the magical creatures they encounter a whole 70 years before Harry Potter heads to Hogwarts for the first time. If the premise alone wasn't enough to get you excited, the fact that Eddie Redmayne is playing the titular character probably is, and now there's even better news: the first Fantastic Beasts and Where To Find Them photos have been released, and they're, well, pretty magical.

Entertainment Weekly got the honor of publishing the first photos from the film in their new issue, and oh man, they definitely don't disappoint. The shots show Redmayne in character both in finished photos and behind-the-scenes snaps from the filming process. A cast shot also features Katherine Waterston, Alison Sudol, Dan Colger, and Queenie Goldstein. I almost don't have words for how much I screamed (internally, of course — I do have some level of decency) when I saw them.

Ooh, the smoke! The old-fashioned street corner! The dapper clothing! I'm not sure how much more I could love about this — I don't think anything, really. It all looks very dangerous and sultry (I know, I know, it's a children's film) and I love it!

I doubt Newt Scamander is crouching in a public area because he's tired. Something tells me something rather dangerous is happening, and he's more ducking for cover than anything else. What's going on here? Where's he going with that suitcase, Hogwarts? (Please let it be Hogwarts!)

This shot features Redmayne alongside Katherine Waterston as Porpentina “Tina” Goldstein, and they seem to be on their way out of (or back to) New York — my guess is the former. Something bad is likely going on in New York's wizarding world, but what is it, and how will Scamander save the day? Maybe they just saw Pizza Rat?

This photo also doubles as the Entertainment Weekly cover, and for good reason: it's awesome. Newt looks like he's the dashing magician that's out to impress all the witches of the wizarding world and the muggles, for good measure. I also really love that turquoise wool coat and think it's a nice color choice, for sure.

As you can see, there's plenty to look forward to with Fantastic Beasts and Where to Find Them, and this is only the beginning. Believe me, I'll be constantly scouring for more and more photos leading to the film's release next year.