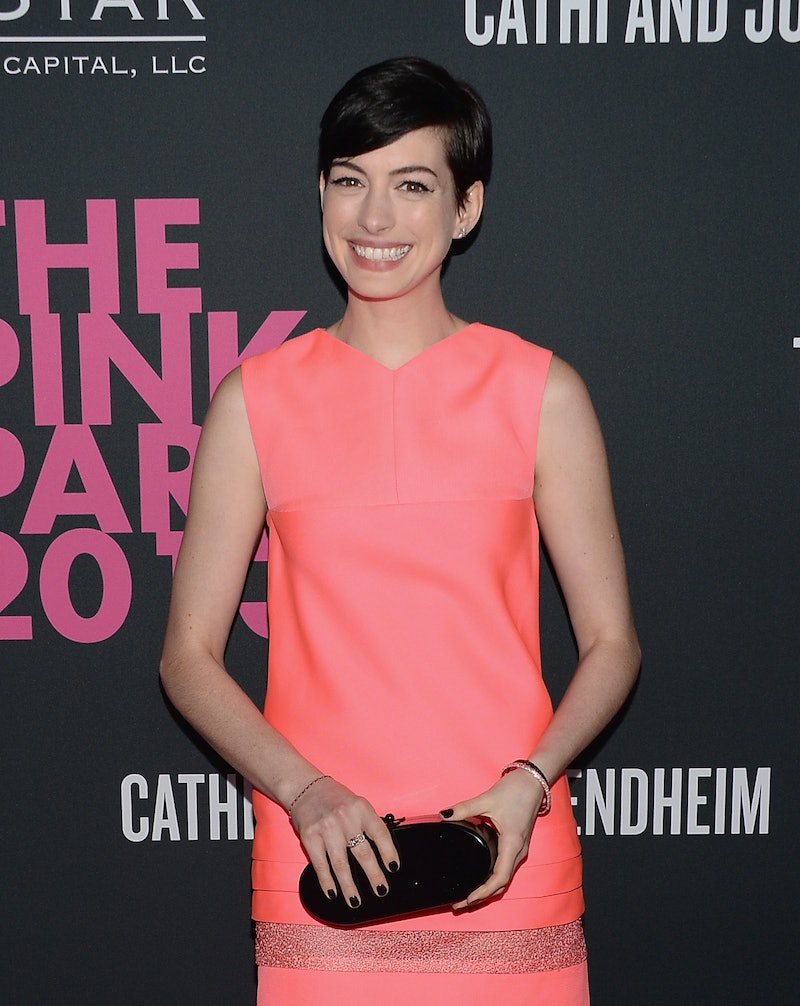 New year, a new outlook on Anne Hathaway? You might think I'm crazy for suggesting this, but 2014 could be the year that good old Anne Hathaway redeems herself, and it'll start with Song One, Hathaway's new film that was produced by husband Adam Schulman. It will premiere at the Sundance Film Festival on Jan. 20 and it could definitely be the second step on her road back into our good graces. (The first was this rumor that she calmly and pleasantly, with the grace of the Princess of Genovia, placed a bag of dog poop on a paparazzo's car.)

Song One brings back vague memories of Hathaway's role in the 2008 indie and festival darling Rachel Getting Married that launched her into the awards circuit with her first Oscar nod (she didn't win, but still) — at least, in the estranged sibling with emotional issues category. The official synopsis for the film, on the Sundance website reads:

For a while now, Franny has been in Morocco researching Bedouin tribes for her PhD in anthropology. The last time she spoke to her brother, Henry, they fought brutally over his decision to ditch college and become a musician. When a terrible accident puts Henry in a coma, Franny rushes home to New York. Desperately seeking clues to his recovery, she dips her toe into the Brooklyn music scene he inhabited, attending a concert by his singer/songwriter hero, James Forester. When James unexpectedly visits Henry’s hospital room, a spark kindles between Franny and this reticent stranger. In the vibrant coffeehouses and clubs they frequent, love and grief intermingle. Franny discovers a new appreciation for her family and the possibility of truly connecting with people, rather than living life solely as an observer.

Before you Brooklynites get up-in-arms about this so-called "music scene" — that's not what this is about. This is about the Anne Hathaway we used love rising from the smoldering, hater-filled ashes and making us like her in 2014. And Franny, who will grapple with guilt and overcoming her own introvert tendencies, could do that for her.

It's a wise decision on her part to not come back in a "Fantine: Part II" style-role that was totally in our faces about how great she is. Also, it definitely doesn't hurt that she agreed to produce the film without being offered the starring role as compensation, either. Kate Barker-Froyland, Song One's writer and director, told The Hollywood Reporter that she "wasn't expecting it at all" when Hathaway called to express her interest in starring in the film but was obviously pleasantly surprised. At least she still knows how to ask for things without being all "I won an Oscar for playing Fantine in Les Mis — now let me be in your movie."

So could this be the first step on the road to Anne Hathaway's public recovery? She once did dysfunction so well without begging for praise and acknowledgement — and it seems like she might be trying to do it again with Song One.