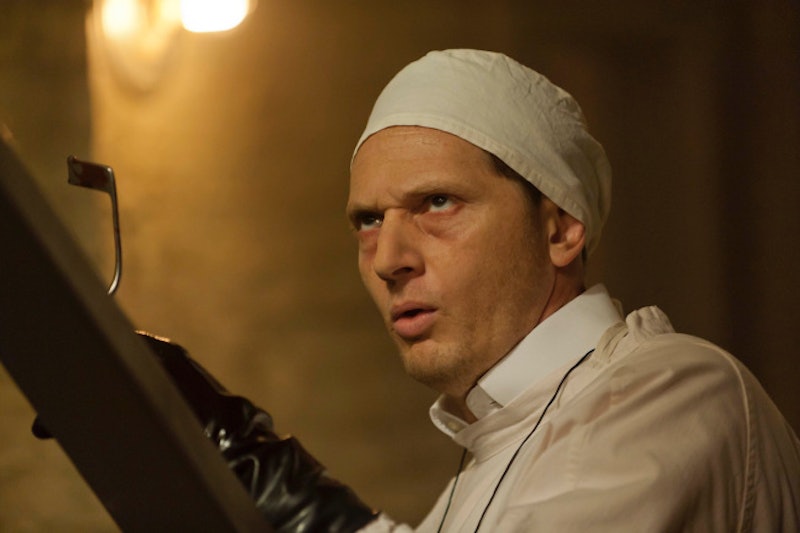 Part of the fun of American Horror Story is trying to figure out how each season is connected to past seasons. When it comes to AHS: Hotel, the fact that Lady Gaga's character The Countess has been alive for over a hundred years hints at her being present for one — or more — of the past seasons. Recently, a "pregnant" Lady Gaga was seen filming at the AHS: Murder House home, which has sparked some rumors that she has interacted with characters from the first season of the anthology. Specifically, the man who lived in the Murder House back in the day, Dr. Charles Montgomery. But how is Dr. Montgomery connected to AHS: Hotel ?

In the first season of American Horror Story, an innocent, modern family moved into an old house in Los Angeles that had a very dark past. Little did they know, Dr. Charles Montgomery had built the house in 1922, and after acquiring an expensive drug habit and losing business as the "surgeon to the stars", he began performing illegal abortions from his home. After word got out that Dr. Montgomery was doing these procedures, a boyfriend of one of his patients kidnapped his son Thaddeus and dismembered him. Montgomery, who had a Frankenstein complex and a penchant for stitching together assorted animal body parts, lost it. He and his wife, Nora, took the remains of his son and attempted to sew him back together, using the heart from "one of their girls." It was then that they created Infantata, a terrifying demonic creature.

So, while Dr. Montgomery's appearance on AHS: Hotel is probably going to be more of a flashback to the '20s, it proves that somehow, all these things come full-circle. And that The Countess and Infantata are related/connected. Which is terrifying, because aren't those with the virus immortal? Is Infantata still out there?