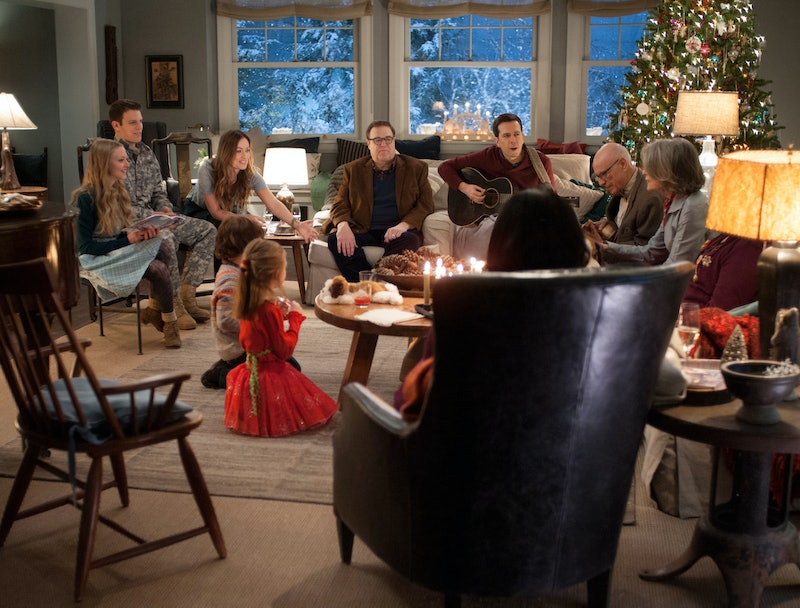 Something about holiday movies seems to attract casts that resemble a rundown of who's who in Hollywood at a particular moment. Love Actually did it in 2003 with Bill Nighy, Colin Firth, Liam Neeson, Emma Thompson, Martin Freeman, Chiwetel Ejiofor, Keira Knightley, Hugh Grant, and Laura Linney. In 2006, The Holiday starred Cameron Diaz, Jack Black, Kate Winslet, Jude Law — and they were just the top-billed actors. Queen Latifah carried Last Holiday alongside LL Cool J, Gérard Depardieu, and Jane Adams. And now we Americans have come up with a worthy response to the Brit Love Actually. The cast of Love the Coopers , a new holiday movie out this month, reads like a roster of great American actors past and present.

Familiar faces like Diane Keaton, Olivia Wilde, Ed Helms, and Amanda Seyfried are just the start. They all fit together in an endearing, sometimes messy family — the titular Coopers — who come together for the holiday season. The matriarch Cooper (Keaton) hopes for the perfect Christmas, but finds her plans unwound by the antics of her family, including a delinquent sister (Marisa Tomei) and foul-mouthed granddaughter (Blake Baumgartner). Here's a full family tree of all the faces that will file past on the big screen when Love the Coopers arrives in theaters.

Keaton, who made her name in Woody Allen's Annie Hall before proceeding to appear in every movie ever, plays the elder Cooper, Charlotte. It's at her wish that the whole family descends upon her home for Christmas, when she hopes to bring that line from "Have Yourself A Merry Little Christmas" — "Faithful friends who are dear to us / Gather near to us once more" — to life with her husband Sam (John Goodman).

Goodman's baritone is probably most recognizable as the voice of Pacha of The Emperor's New Groove and Sulley of Monsters, Inc., but he's also a recognizable face who has appeared in The West Wing, Treme, Damages, Community, and Inside Llewyn Davis. He plays Diane Keaton's husband Sam.

Marisa Tomei, of My Cousin Vinny, The Wrestler, and Love Is Strange (among many, many others), plays Charlotte's sister Emma. On the hunt for the perfect gifts for her family, she not-quite-accidentally makes off with an enticing brooch. When confronted by the police, she tells them she mistook it for a throat lozenge. (That's how it ended up in her mouth, she says.)

Mackie (The Hurt Locker, Million Dollar Baby, Our Brand Is Crisis) isn't part of the family, but he might as well be — he's implicated in their holiday antics as the arresting office, Officer Williams, involved with Emma's shoplifting case.

The newly minted octogenarian plays Charlotte's father Bucky. He dines at the same quaint diner every day, where he's served by none other than Amanda Seyfried. According to early looks, the family proceeds to adopt Seyfried for the holidays.

Seyfried's character, by the way, is named Ruby. As mentioned above, she's a waitress at a local diner, but she'll definitely be joining the Coopers for Christmas dinner.

As in Vacation, Ed Helms plays a bit of a dopey dad in Love the Coopers. He's Hank, a single father of a young girl named Madison, and the son of Charlotte and Sam (Keaton and Goodman). Newcomer Phillip Zack plays a younger version of Hank, indicating that there will be plentiful flashbacks.

Olivia Wilde has come a long way since House . She's starred in comedies and dramas alike, and now will tackle holiday romance as Charlotte and Sam's daughter, and Hank's sister, Eleanor. Perpetually single, Wilde recruits Jake Lacy, a stranger she encounters at the airport, to play her boyfriend — just for the night. Just to please her parents. (Presumably, as is the nature of the holiday romance, it's not really just for the night.)

Jake Lacy, who also appeared in Obvious Child, Carol, and on the television series Girls, plays Joe, Eleanor's spontaneous new boyfriend who takes his role just a bit too seriously. (In one trailer, Wilde introduces him to her parents, at which point he proclaims that he and Eleanor are actually engaged).