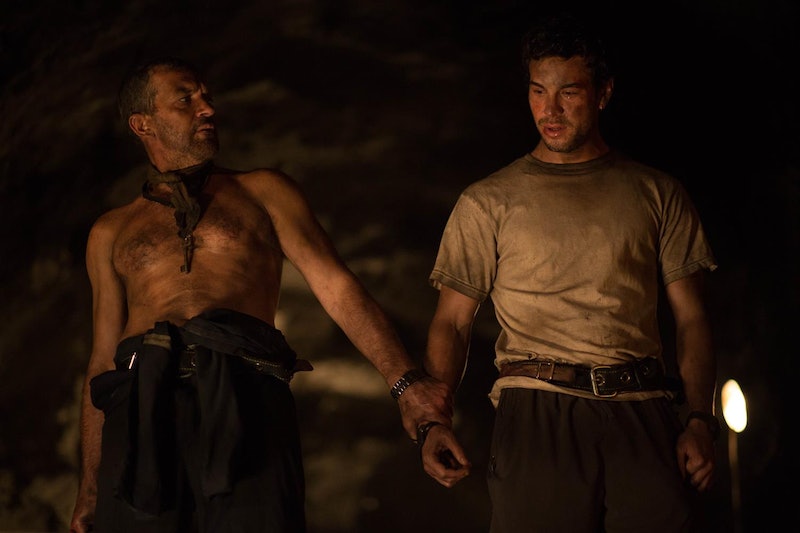 On Oct 13, 2010, a billion people all over the world watched breathlessly as a group of 33 Chilean miners were rescued from their underground prison. The men had been trapped in a collapsed mine for 69 days, in an ordeal that was unfathomable to those watching. Over five years later, their story is coming to movie theaters in The 33, a feature drama helmed by Mexican filmmaker Patricia Riggen. Antonio Banderas, Rodrigo Santoro, Lou Diamond Phillips, Juliette Binoche, Gabriel Byrne feature in the film's international ensemble cast. The real life story that inspired The 33 is more dramatic and come with higher stakes than even the most intense fictional disaster films. But will the movie do the survivors of the Chilean mine accident justice? In other words, how accurate is The 33 in telling their remarkable story?

Thanks to the 24-hour-news cycle, the public was privy to a lot of the ins and outs of the trapped miners' communication with the outside world and the rescue efforts, which had to be meticulously planned lest one small error bury the men alive. But what's difficult for anyone who wasn't directly touched by the accident to imagine is what life must have been like in those 69 days for the miners and for their loved ones. Director Patricia Riggen told the New York Times that being respectful of those experiences was her main goal for the film. She went so far as to interview not five, not 10, but all 33 of the survivors. She spoke with their families as well.

They have been so beaten by life, and what’s most important to them is their dignity...It was very important for me to reach down into their hearts and be as truthful as I could.

Even a moment in the film that seems like pure fantasy has roots in the survivor interviews. Riggen told the publication IndyStar that a scene that shows the men enjoying an elaborate, dreamed-up feast was inspired by their coping mechanisms. "It doesn't come from me trying to be clever," she said. "I asked the miners, 'How did you survive hunger?' They talked about food the whole time. They imagined feasts. They cooked. They made roasts. They brought in giant empanadas. The other guy cut vegetables. They described community meals that they made for themselves down there."

In an interview with the site TalkNerdyWithUs, Philips spoke about the participation of the miners before and during production and how that served the heart of the film.

Mario Sepulveda, who was Antonio Banderas’ character, was there almost constantly. And he had been magnanimous and bigger than life, as Antonio plays him. And I had the great opportunity to spend some time with Luis Urzua, my character, and just soak up the man’s, you know, quiet dignity and his reserve.

The result, if the film has done its job, is a deeply personal view of a incredible feat of human perseverance and ingenuity that played out on an global stage. The Deadline review of the film praises the movie for its dynamic point-of-view, stating that it's "been wisely opened up to tell the story from several angles, including the miners of course."

The scenes that take place in the mines themselves look more than suitably realistic, and they should. Riggen and her cast and crew filmed in real mines — these ones in Colombia, not Chile. Though Riggen told The New York Times that the shooting set-up resulted in "many trips to the hospital," it was the only way she could achieve the level of realism required on her small budget.

And the hardships the production team endured could only underscore the unbelievable survivalist skills of the 33 miners whose story they were there to tell.