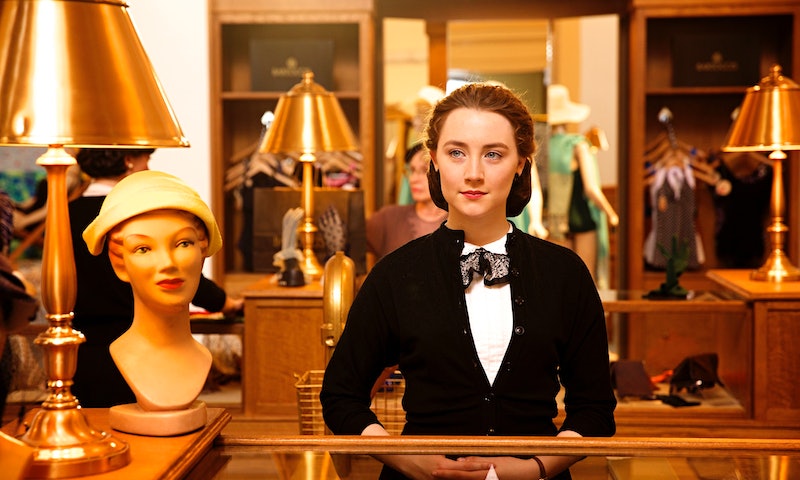 Oscar season is always an exciting time, as we get to watch all the best movies of the year, debate about our predictions, and cheer for our favorites on the big night. But they can also be a particularly frustrating time, considering how often the Academy Awards can feel like a mens club. So, we should all make it our mission to support the exciting female-driven films that this Oscar season has to offer.

Sadly, only four women have ever been nominated for Best Director, and only one has taken home a trophy: Kathryn Bigelow, for 2009's The Hurt Locker . Things are a bit better in the Screenwriting categories (especially since there's two of them), but not by much: Only two women have won in either category in the past 10 years, and one was for a script co-written with a man — Diana Ossana's and Larry McMurtray's Brokeback Mountain — with Juno 's Diablo Cody the only sole-credited female screenwriter to be honored in over a decade.

Obviously, 10 women are nominated for Acting awards every year, by virtue of there being separate categories for men and women in those fields. But, it's dispiriting how infrequently those nominations match up with the Best Picture category. In 2014, while four out of five men in the Lead Actor category represented BP nominees (with Foxcatcher's Steve Carell the sole exception), only one out of four women in the Lead Actress category did the same — and she shared her film with an also-nominated male co-star (Felicity Jones and Eddie Redmayne in The Theory Of Everything). In the Academy's 87-year history, the Best Picture and Best Actor winners have matched up 27 times; Best Picture and Best Actress have only matched up 10 times.

This year doesn't seem like a marked improvement, either. Of the 40 films considered Best Picture contenders by prognostication website AwardsCircuit.com, only 18 have a female director, a female screenwriter, or a female star who's also considered a contender for Lead Actress. That's less than half that have a woman in any three of those categories.

Viewers should show the Academy of Motion Picture Arts & Sciences that female-driven films ought to be legitimate contenders by throwing our weight (and our money) behind them in this year's Oscar race. Here are 18 films like that to focus on, in order of their ranking in the Best Picture competition according to AwardsCircuit.com:

The first four spots in the BP race are all dominated by men: Bridge Of Spies, Spotlight, Steve Jobs, and The Revenant. Women aren't anywhere to be seen until The Danish Girl at number five. Like Felicity Jones last year, if Vikander is nominated, she will have to share her nomination with co-star Eddie Redmayne. Coxon is a prime candidate for a Screenwriting nod for adapting David Ebershoff's 2000 novel of the same name.

Blanchett just won the Lead Actress prize two years ago for her performance in Woody Allen's Blue Jasmine, and it's possible she could take yet another trophy for this film, adapted by Nagy from the 1952 novel The Price Of Salt by Patricia Highsmith. Blanchett's co-star Rooney Mara (The Girl With The Dragon Tattoo) will likely be submitted in the Supporting category to avoid splitting the vote.

Ronan was nominated for an Oscar when she was only 13 for her role as Briony Tallis in 2007's Atonement, making her one of the youngest nominees in history. Now, she may prove her legitimacy as an adult performer with this film about a young Irish immigrant who moves to the titular NYC borough and finds herself torn between her home country and her adopted home.

This harrowing Holocaust tale from Hungary drew raves when it premiered at Cannes this summer. Considered a frontrunner for the Foreign Language Film category, Son Of Saul was co-written by Royer and the film's male director, László Nemes.

Sadly, stars Amy Poehler and Phyllis are ineligible for nominations for their performances on this delightful Pixar film because they were voice-only — no matter how terrific they were. But LeFauve (who co-wrote the film with Josh Cooley and director Pete Docter) could very well earn Inside Out the Oscar recognition it so richly deserves.

Academy darling J. Law has been nominated for three Oscars in five years — and won Best Actress for Silver Linings Playbook at the young age of 22. Will she repeat her success in her third go-round with her Playbook and American Hustle director David O. Russell? The film's initial writer, Mumolo (Bridesmaids), lost her screenwriting credit when Russell took over the project. But, fortunately, she may still be eligible for an Oscar thanks to her "Story By" credit.

Like Gone Girl's Gillian Flynn, Donoghue adapted her own acclaimed (and harrowing) novel to the screen; can she land a coveted Screenwriting nomination? Her star, 25-year-old Larson (Short Term 12), has been picking up awards chatter for her devastating performance as young mother held captive with her son.

Even though this tense thriller also stars a former Oscar winner (Traffic's Benicio del Toro), it's The Devil Wears Prada star Blunt who has been getting the bulk of the attention for her turn as Kate Macer, an FBI agent who finds herself in over her head during clashes with Mexican drug lords.

The summer's most feminist action movie launched a new female hero into the annals of cinema legend, alongside Alien's Ripley and Terminator's Sarah Connor. As Imperator Furiosa, Charlize Theron stole the show from the titular character; could she also steal the Oscar thunder from more traditional "awards bait" roles?

One of the two movies on this list that has a woman occupying all three major roles — and in this case, all three roles are occupied by the same person, superstar Jolie. She co-stars with her real-life husband Brad Pitt in this movie that she wrote and directed about a couple unraveling while on vacation.

No, this movie isn't here because of its male director (F. Gary Gray) or its bevy of male stars (like O'Shea Jackson, Jr.) — but instead for its female screenwriter, Berloff, who co-wrote the summer's sleeper hit with Jonathan Herman. (Berloff also wrote the 2006 Oliver Stone movie World Trade Center.)

Blanchett makes her second appearance on this list for her role as Mary Mapes, the real-life CBS producer who — along with legendary anchor Dan Rather (played here by Robert Redford) — found her career in shambles after the veracity of a 2004 story about then-President George W. Bush was questioned.

The second film on the list with women in all three major roles. Oscar nominee Mulligan (An Education) stars in this fictionalized telling of the early days of the women's suffrage movement in England. Gavron and Morgan previously worked together on the acclaimed British drama Brick Lane, and Morgan also scripted Meryl Streep's The Iron Lady and Michael Fassbender's Shame.

In this adaptation of the 2005 documentary of the same name, Oscar winner Bullock (The Blind Side) portrays a version of real-life political strategist James Carville. How is that possible? George Clooney (who also produces the film) was originally signed on to play the role, before the gender-swapped role was handed over to his Gravity co-star.

One of the most famous female roles in all of literature will be brought to cinematic life by Oscar winner Marion Cotillard (La vie en rose) this fall, opposite Michael Fassbender as her doomed husband. Can she bewitch Academy members enough to land herself a nomination?

Despite giving birth to a Best Actress winner (Gwyneth Paltrow, Shakespeare In Love), Danner herself has never even been nominated for an award. But, she became the first official Oscar contender of the season when the studio behind I'll See You In My Dreams made sure the film was the first screener voters received in their mailboxes this year. Perhaps the early bird will catch the worm.

This intense true story about the 33 Chilean miners trapped underground for more than two months was helmed by Mexican director Riggen. Her previous most well-known work was the 2012 drama Girl In Progress, starring Eva Mendes and now-Oscar winner Patricia Arquette.

Two-time Oscar nominee Jessica Chastain (The Help, Zero Dark Thirty) appears in a supporting role in this Guillermo Del Toro horror film, but it's 25-year-old star Wasikowska who's getting all the attention this time around. The actress has appeared in Academy Award-nominated films before (The Kids Are All Right, Albert Nobbs) and she also starred as the title character in the 2011 adaptation of Jane Eyre by acclaimed director Cary Fukunaga (True Detective, Beasts Of No Nation).

How many of these 18 films will land Best Picture nominations? There's no proven correlation between box office receipts and Academy recognition, but it certainly can't hurt to show our public support for such female-driven material — at least so Hollywood continues to make more like them in the future.

More like this
12 Years Ago, Austin Butler Manifested His Oscar Nom In This Disney Movie Scene
By Jake Viswanath
Why Andrea Riseborough Is Confused By Her Oscar Nomination For Best Actress
By Jake Viswanath
Yes, You Can Stream ‘To Leslie’ In The UK Now
By Sam Ramsden
Your Guide To Watching 'Everything Everywhere All At Once' In The UK
By El Hunt and Sophie McEvoy
Get Even More From Bustle — Sign Up For The Newsletter
From hair trends to relationship advice, our daily newsletter has everything you need to sound like a person who’s on TikTok, even if you aren’t.