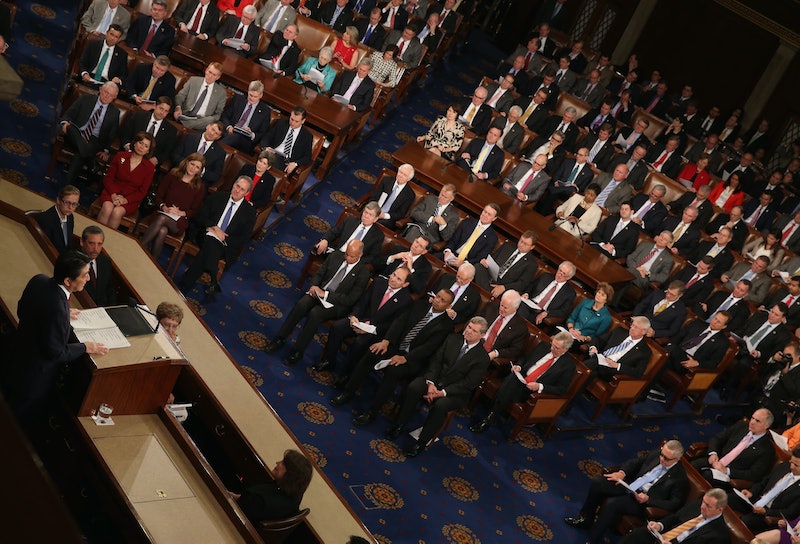 Whenever someone tries to tell me that nowadays the real people who face societal oppression are men or white people (or straight people or Christians), I have to laugh — and to wonder if they've ever seen a picture of Congress. And it seems that Congress isn't the only problem: According to a study by the Reflective Democracy Campaign, white men are overrepresented in political office not just at the national level, but in state, county, and municipal government as well. In fact, even though white men make up only 31 percent of the country, they make up 65 percent of elected officials.

In other words, our government doesn't look anything like the American population does.

So why is it that, in the year 2015, there are roughly double the number of white men in elected office as there ought to be, given the percentage of the population they represent? Are voters just racist, sexist bigots who won't vote for women and/or people of color? Well, possibly, but the truth is we rarely get to find out. Turns out that 66 percent of all candidates for political office are also white men. So first and foremost, it's a pipeline problem with who is able to run for office.

Basically both parties suck so much that who is doing better is kind of irrelevant. Both have a major obligation to be better, because the status quo needs to change ASAP.

“This data shows that the problem is not that women and people of color candidates aren’t winning — in fact, they’re winning at the same rates as men and white candidates,” Brenda Choresi Carter, Director of the Reflective Democracy Campaign, said in a press release. “The problem is that the demographics of our office holders are set when our ballots are printed.”

It's a structural problem, and one that has important consequences for the country. Representative democracy is founded on the idea that everyone deserves a voice in government. But if various communities are not properly represented, their voices aren't properly heard — which undermines the central premise behind our government.

The truth is that white men still hold an absurdly disproportionate amount of power in this country, and while we have made important strides to ensure representation for women and people of color in recent years, it's far from enough. It may seem like white men are being edged out of government, but only because their share was so massive to begin with that it's going to take a lot of chipping away to make things equal. And clearly we aren't there yet — nor are we likely to get there any time soon if parties are still running a disproportionate number of white male candidates.

You can find out more about the numbers by reading the full report here, or in the video below.

More like this
10 Times Boris Johnson Got It Wrong On Trans Rights
By El Hunt and Sam Ramsden
7 Gun Control Advocates To Follow On Twitter
By Madhuri Sathish-Van Atta
Photos Of Boris Johnson Drinking At A Downing Street Lockdown Party Have Surfaced
By Bustle UK
Sandra Bullock, Girlboss Extraordinaire
By Matt Harkins & Viviana Olen
Get Even More From Bustle — Sign Up For The Newsletter