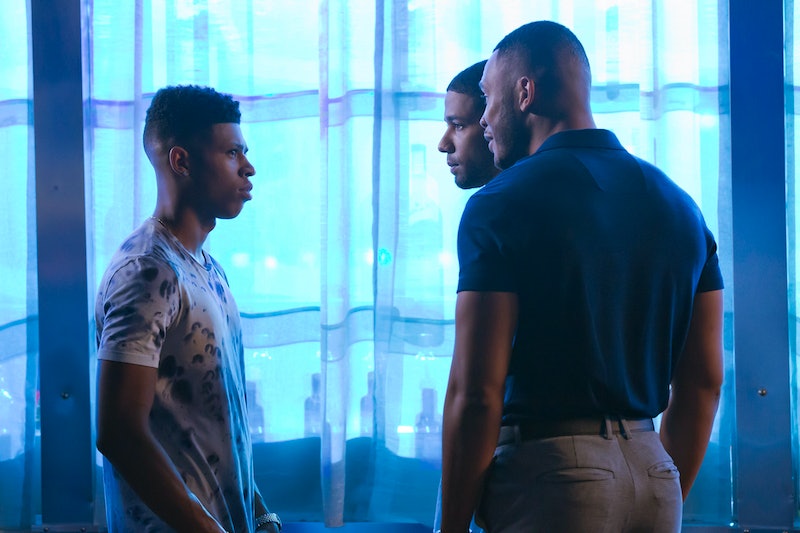 Reunited and it feels so damn good, you guys. Hakeem Lyon is safe after being kidnapped on Empire , so start your telephone tree, call off the search parties, and update your Facebook statuses. We have found Hakeem. The "finding" of Hakeem was actually a little anticlimactic, as he was back with his family pretty quickly into the episode "A High Hope For A Low Heaven," but it was the aftermath of Hakeem's kidnapping that is worrisome. It appears that Hakeem suffered from a little post-traumatic stress disorder after being returned to his family, and while it might be OK now, don't be surprised if it comes back to haunt him.

After being ruffed up by the kidnappers — who all have a longhorn branding/tattoo on their backs — Hakeem was abandoned and returned home. Not before he made a visit to Anika, if ya know what I'm sayin', but eventually he made it back into Lucious' den. But, it is clear that the scratch on his face is the lesser of the scars he walks away with after his kidnapping. Not only is Hakeem dismissive and aggressive, but his anger and mini-mental breakdowns are major reasons for concern.

After Cookie and Hakeem pay a visit to the men that abducted him, and Hakeem draws a gun on them, it is obvious that Hakeem is severely damaged from his experience. That's supported even more when it appears Hakeem is hearing voices in his head and punches a mirror out of pure rage. While Hakeem blames Cookie and Lucious for being the reasons he was abducted, he also blames himself because he wasn't able to fight back. Dude, it was three-to-one, they had weapons, you were tied up... no one is blaming you on that one.

After a pep talk with his brothers, Hakeem was able to snap out of his post-abduction funk. But this might not be the end of Hakeem's issues. There was a lot going on with him in this episode, and if it isn't PTSD, I wonder if he was drugged or given something that would cause him to act in such a way. If that is the case, let's hope that the Lyon brothers are there for him if he falls down, because a wounded and struggling Hakeem is a wounded and struggling nation. For now, let us rest easy that he is safe in bed.