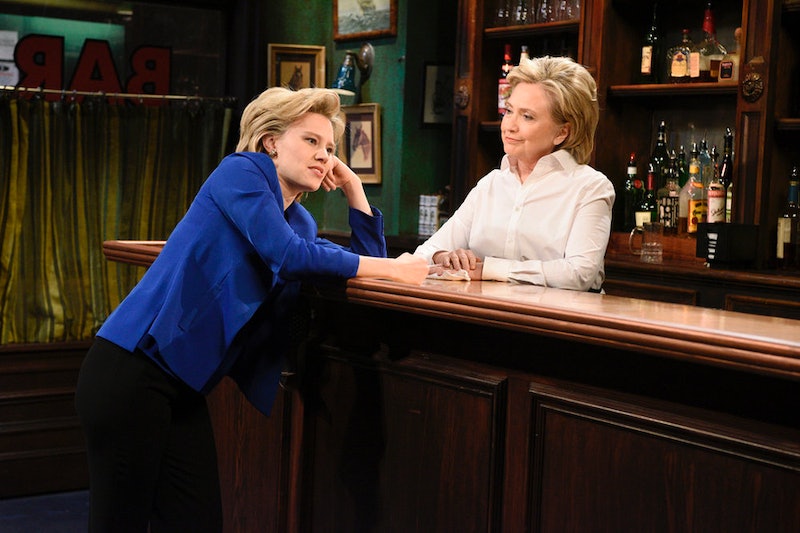 It's a great year to be Saturday Night Live. Not only is it an election year, but the candidates of the presidential race are basically writing SNL's content for them. The two worlds are colliding on Saturday when Donald Trump hosts SNL, making him the first candidate to host this season (and it's going to be HUUUGE). But, he's not the first candidate to make an appearance this season. That title goes to Hillary Clinton, who appeared in the premiere episode of Season 41. But a guest appearance isn't good enough. Hillary Clinton needs to host SNL this season, because let's be honest, she'd be awesome at it.

With Trump taking over the studio 8H stage on Saturday, you've got to wonder if and when Clinton will also be given the chance to show off her comedy chops for a full show. It only seems fair, right? Let one GOP candidate have a go at it, and then one Democratic candidate also get the opportunity to take the lead for the night. That's why we have the two-party system, right? If anything, it will at least allow Clinton to blow off some steam from the high-stress environment of the election process. (I'm sure Kate McKinnon's impression of Clinton would say something about there's no rest for the future POTUS right now.)

So if Hillary Clinton is tapped as a host for Saturday Night Live, what can we expect from her?

She Can Keep Up With The Cast Members

When Season 41 premiered, Kate McKinnon wasted no time jumping into her role as Clinton. But this time she was performing along side the real Hillary Clinton. Keeping in mind that Clinton is not a professional actor, she kept up with McKinnon pretty well, proving she could totally host an entire episode.

She Can Play Opposite "Donald Trump"

Jimmy Fallon's Donald Trump has become just as popular as McKinnon's Clinton. While visiting The Tonight Show, Clinton proved she could even converse with fake Trump and be funny.

She Can Do Impersonations

Even though it is brief, the few seconds of Clinton's impersonation of The Donald makes me think she's got a couple of other impressions up her sleeve.

She's Got The Intro Down

In 2008, Clinton appeared on the show along side Amy Poehler — who was playing her that SNL season — and flawlessly delivered the iconic "Live, from New York, it's Saturday night!"

It's a tall order, but just imagine generations of SNL Hillary's along side Clinton herself. As a nation, we deserve that much.