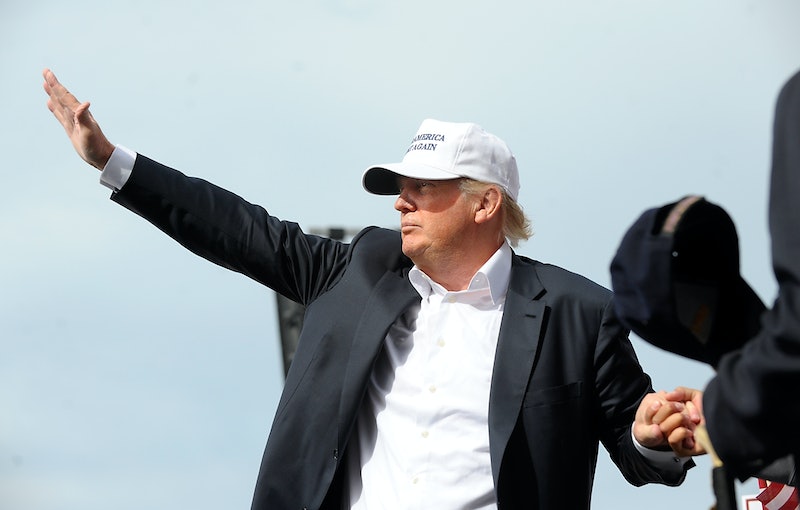 During the 2008 election, Saturday Night Live was must-watch television. Hysterical political coverage, paired with several candidate cameos cemented the season as one of the best in the show's history. And this season, the comedy show is looking to recreate their past success with last month's sketch featuring Hillary Clinton and an SNL appearance from Donald Trump slated for this weekend. But when Trump takes the stage on Saturday, it won't be for a quick cameo — it will be as a full-on host. And there's a big difference between appearing on SNL and hosting it.

In Trump's defense, he has a relationship with the show that stretches further back than any other presidential candidate. He and his family have been portrayed on the show for almost 20 years, and he even hosted an episode in 2004. He's proven that he's affable, willing to poke fun at himself, and prepared to engage in antics. He's a logical choice for host.

It's also not unheard of for politicians to appear on the comedy show. Since its inception, celebrity guests have appeared as well as a plethora of presidential hopefuls — Barack Obama, Clinton, Sarah Palin, and John McCain — have portrayed themselves on the show. But none of them have hosted.

The difference between Clinton's three-minute sketch and Trump's upcoming stint as a host is the different level of exposure that it provides to the individual candidate. It's not just a passing concern — it's a legal matter as well. When Clinton appeared in early October, the channel had to report the three minutes of free airtime that they gave her to the FCC as part of the "equal time" rule, a condition that requires stations to allow equal exposure to any presidential candidate. Essentially, this means that SNL could land in hot water if other candidates request equal exposure. Inviting Trump may have opened up a can of worms that the channel isn't prepared to deal with.

But the key distinction between Trump and other candidates who may seek hosting duties is that Trump doesn't need SNL — SNL needs Trump. "If I turn away from the camera, your ratings will drop five points," Trump joked while hosting the show in 2004. And he had a point, that rings true through today.

By selecting Trump to host, the comedy show is not officially endorsing him for president. Instead, it's using him for the mega boost that he will bring — a phenomena that has been proved, both through the massive ratings that the Republican debates pulled in, as well as the difference in ratings between the Republican and Democratic debates.

While Trump certainly gets free exposure out of the situation (and a further chance to brag about his ratings draw), he doesn't need an SNL skit to show his supporters how laid back and funny he can be. Previous political guests like Palin have, at times, benefited from the exposure and used the opportunity to show that they could roll with the punches and crack some jokes. But Trump has his Twitter account to prove that for him. And lampooning his larger-than-life image could potentially be a negative for his campaign.

According to Trump, his appearance on the show was initially slated to just be a cameo, in line with what other politicians have done in the past. During a Wednesday morning interview with CNN's Chris Cuomo, Trump claimed that when Lorne Michaels found out that Trump was willing to appear, the creator and executive producer jumped at the chance to have Trump go the full mile and host.

Why? Ratings. The episode hasn't even aired yet, and it's already attracting buzz. People are picketing outside of the studio, Hispanic viewers are boycotting, and there are dozens of articles on the subject already. It's a publicity goldmine for a show that's averaging 6 million views this season — which is less than half of what the Democratic debate pulled in.

There is an undeniable inequity between the way that SNL is treating Trump and Clinton (and the rest of the candidates who have been completely ignored). But despite the discrepancies in their roles and time, Clinton was treated with the seriousness of a presidential candidate, while Trump is likely to be treated as an entertainer. And when it comes down to picking a U.S. president, ratings don't matter.