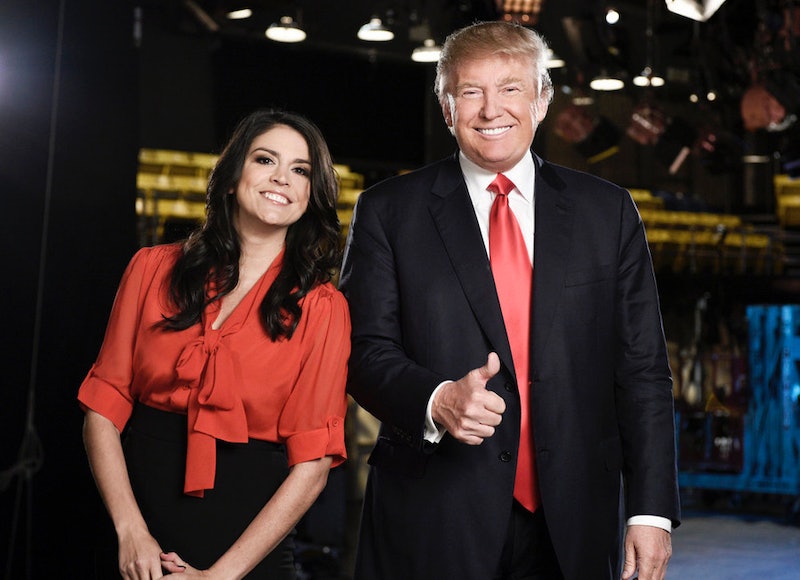 On Nov. 7, Republican Presidential Candidate Donald Trump hosts Saturday Night Live and it won't be the first time — it'll be his second go-around as host. Videos of Donald Trump hosting SNL in 2004 show that he had a sense of humor about himself. Whether or not that's still true, we shall see. Back in 2004, it was a simpler time: Trump gained (more) fame and riches while starring on the highly-rated competitive reality series The Apprentice and even had his own trendy catchphrase: "You're fired!" Fast-forward to 2015 and Trump is no longer attached to the reality series — for many reasons that may or may not have to deal with offensive comments he's made about immigration.

As for that, Trump made a statement back in June geared towards NBC. "Mr. Trump stands by his statements on illegal immigration, which are accurate. NBC is weak, and like everybody else is trying to be politically correct — that is why our country is in serious trouble."

Hosting SNL could either endear Trump to voters, giving him a boost in the polls, turn them off completely, or have no affect. But, I'm not here to discuss politics or figure out campaign strategy — I'd like to talk about some good ol' fashioned sketch comedy. After being impersonated many times on the show, Trump made his SNL outing as host on April 3, 2004, and it's filled with bravado, poking fun at himself, and "You're fired!" exclamations. Trump is a little awkward at times, but he's not a bad performer — and after all, isn't politics a version of performing? Sadly, the full episode is no longer available on Netflix or Hulu, but clips exist around the internet.

Here's the sketch-by-sketch breakdown of Trump's SNL episode from 2004.

With a very funny assists from then-cast members Jimmy Fallon and Darrell Hammond, Trump comes out cool and collected with his bravado in full force — and I'm not shocked. It's just who he is. "It's great to be here at Saturday Night Live," he tells the audience. "But I'll be completely honest, it's even better for Saturday Night Live that I'm here. Nobody's bigger than me. Nobody's better than me. I'm a ratings machine." Sound familiar? He even anoints Hammond, who does an amazing impression of Trump, to be his "really great replacement" when he gets called away on business.

There was bound to be an Apprentice sketch where Trump plays himself— but hey, this one has SNL alums Amy Poehler and Fred Armisen, plus it evolves into actual band practice for some reason. Let's just go with it. Trump has fun playing a Ross Geller-like keyboard, while Poehler and Armisen sing a punk tune called "She's Got Class."

This sketch could be a good indication of what a Trump political ad might be like. The clip above imagines if Trump decided to buy a chicken joint in New Jersey and became one with the regular folk in chicken suits. He stumps for chicken wings being the best part of the chicken and uses a catchy theme song, "Trump In" (to the tune of "Jump!").

Trump didn't spend the whole episode playing himself, thankfully. In the clip above, he plays father who isn't too different from his own personality to a young and sensitive Seth Meyers (wearing a blonde wig) on a public access TV show.

In this 2004 clip, Trump once again played himself on Live! With Regis and Kelly (with Poehler and Hammond yukking it up as the hosts). If there's one thing these clips are reminding me of, it's that Hammond and Poehler are comedic geniuses and should always been on screen. That and Trump will probably stick to playing himself on SNL on Saturday — as he said, nobody's better than him.