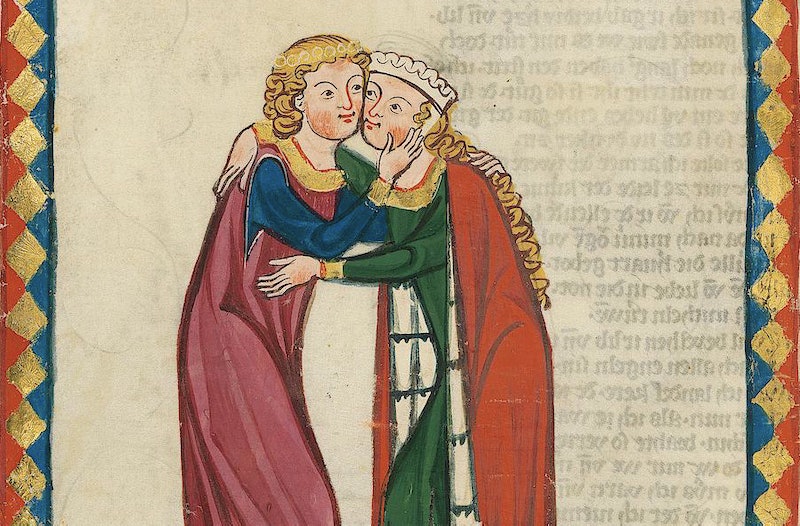 The ancient world was far too busy thinking about togas, pyramids, and killing uppity Caesars to pay much attention to sex, right? Oh so wrong. Sex was, for many human civilizations, a key part of their spiritual and cultural beliefs — and even seemingly innocuous parts of everyday life could have hidden connections to sexy-times. It's not all flirtation and chastity belts (which, by the way, might not have even really been a thing); sexuality's most intriguing moments in human history have included sacred temple prostitution, camel dung phalluses, and frenzied hallucinogenic holy orgies. And underneath many of these practices, there were some pretty startling historical myths about sex itself: what it does, how it works, how to make it better, and whether we get to keep doing it after we're dead. (Really.)

One of the things you should understand about Roman and Greek thoughts on sex is that they were taken as gospel in Europe for many hundreds of years. Physicians and thinkers like Pliny the Elder and Galen were taken as gospel authorities until, in some cases, over a thousand years after they'd dropped dead. So some of this stuff was part of legitimate medical European thought for a very long time. Others are very culture-specific, and eroded or became confused as the culture itself changed. (One day, "Netflix and chill" may have an entirely different meaning that confuses the hell out of anthropologists.)

Here are five beliefs about sex from various parts of history that may make your eyes bug out of your head. You may also not want to be eating while you read this...

Myth #1: Female Orgasms Are Needed To Create A Baby

We'll start off with a rather nice one. It's not the most harmful myth in history, but this was a secure part of sexual belief for many centuries. Its most famous proponent was the Roman physician Galen, or Claudius Galenus, who published treatises about medicine and was the source for a lot of medieval and Renaissance ideas about getting dirty. According to Galen, humans were the top of the evolutionary food chain because they produced the most "vital heat" from their bodies — and that inner heat, in both men and ladies, was the key to anybody getting pregnant.

In Galen's view, both women and men had "sperm" of a kind (he called it "seed"), and the ferocious heat generated by vigorously getting sexed was necessary to "commingle the seed, the animate matter, and create new life". However, both parties had to get hot and heavy — and orgasm — for there to be any hope of a baby resulting. Nowadays, alas, we know better, though that might not be the word you use for it.

Myth #2: You Can Have Sex In The Afterlife

Well, it's hard to exactly disprove this one, but I think we can safely classify it as a myth nonetheless.

Myth #3: A Dead Lizard Drowned In Urine Can Dampen Lust

I mean, this one isn't entirely far-fetched, as I'm pretty sure presenting a paramour with a glass of urine in which a lizard had recently passed away would take away sexy feelings for a very long time. But it's part of a class of so-called anti-aphrodisiacs that the ancient Egyptians, Romans, and Greeks collected with great interest. Cures for impotence are one thing (pomegranates, fennel and lettuce were popular), but, as Vicki Leon notes in The Joy Of Sexus, things for dampening raging lust were sought just as wildly. It's the equivalent of thinking hard about Margaret Thatcher for several minutes.

The particular recommendation for making yourself reduce the pains of lust comes from the Roman writer Pliny The Elder, who specified that it had to be a man's urine, and that the lizard had to have actually drowned in it, not just be some dead lizard you had lying around. (Sorry.) He was, however, openminded; if you didn't have the precise ingredients for that particular recipe, you could just wear "the right section of a vulture's lung worn as an amulet in a crane's skin". It does seem fairly unlikely that anybody would approach you with filthy intentions in the face of that accessory.

Myth #4: Flatulence-Inducing Foods Will Arouse You

On the other side of the scale — and going back to our old friend Galen — it seems that a particular bodily function we do not associate with great sex these days was, in the Roman period and afterwards, seen as pretty necessary for artificial arousal. For Galen, any food that made you absurdly flatulent was an epic aphrodisiac. Not purely for the joy of the smell, though: he believed that the wind in your body would "inflate" the sexual organs, and so recommended diets laced liberally with spices, peas, and mustards.

If you want to stick to more Biblical inspirations for your sexual pleasure, of course, you have an option that was pretty popular in medieval Europe: the mandrake plant. (Yes, that thing that's reputed to scream like a baby in Harry Potter.) Because it looks a little bit like a tiny person, it was thought to inspire female fertility and arousal, and shows up in the Bible several times to produce lust and pregnancy in ladies. Don't do this these days, though: the toxicology of mandrakes is pretty full-on, and all varieties include high amounts of alkaloids (some can induce hallucinations).

The ancient Chinese practice of foot binding has, these days, largely died out— and that's not a bad thing, as the practice involved cruelly breaking an infant girl's foot and folding it over so that, as an adult, she could barely support her own weight. The feet that resulted were often barely a few inches long. However, "golden lily" or "lotus feet," as they were known, resulted in a "lotus gait," a seriously faltering walk that was meant to make a woman more sexually powerful — because she'd develop stronger, more sensitive vaginal muscles. In case it wasn't clear, this doesn't actually work.

The reasoning was that women's vaginas had to become phenomenally developed to help her keep her balanced on her crippled feet, resulting in the kind of Kegel muscles that could strangle a cow. It was also meant to show that a "golden lily" woman belonged to a wealthy man who didn't require her to work, just to be sexually available and/or pregnant: a sexual status symbol.