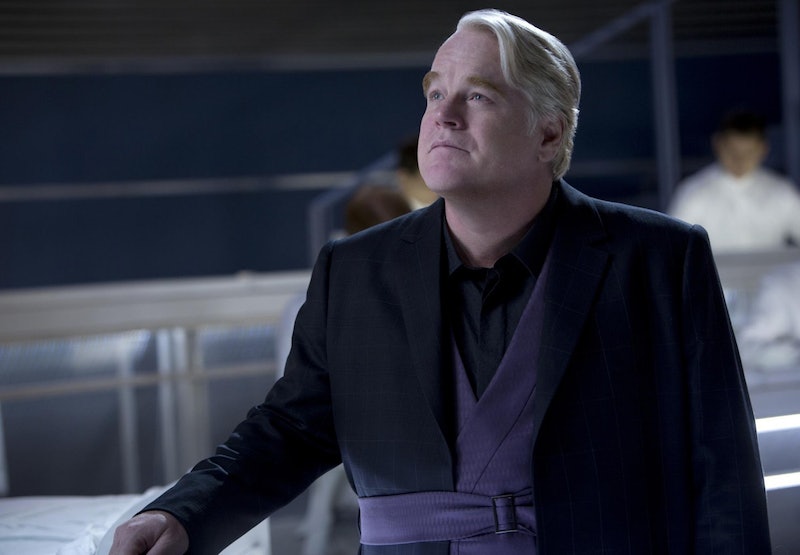 Fans and actors alike were overwhelmed with grief at the sudden death of award-winning actor Philip Seymour Hoffman last year. Hoffman, 46, was found dead in his Manhattan apartment on Feb. 2, 2014, with a syringe in his left arm. His autopsy later ruled that an accidental overdose consisting of a toxic mix of heroin, cocaine, and other drugs was responsible for his death. At the time, the actor had finished filming his scenes for The Hunger Games: Mockingjay, Part 1 (which was released in theaters Nov. 21, 2014), but still had scenes to shoot for Mockingjay, Part 2, according to the New York Daily News. This dilemma raised several questions about how the missing Philip Seymour Hoffman Mockingjay scenes would be accounted for, and one uncomfortable solution that came up was utilizing CGI to digitally recreate Hoffman as his character Plutarch Heavensbee.

Personally, the mere thought of replacing Hoffman with a CGI replica hits me as insensitive and insulting to the Oscar-winning actor's career. It suggests that such a talent can be replaced with a wave of a computer's magic wand. Thankfully, director Francis Lawrence seemingly agreed with my sentiments; in a roundtable with the movie's producer Nina Jacobson and screenwriter Peter Craig, posted on The Hunger Games' website in May 2014, Lawrence said of Hoffman's remaining scenes,

"We finished the majority of his work. I think he might have had 8 to 10 days left on our schedule. In most of those scenes, Phil didn’t have any dialogue. We are going to put him into those scenes, but we’re only using real footage. We’re not creating anything digital or a robotic version of him."

"We might give a line of Plutarch’s to Haymitch or Effie, but only in circumstances that we are able to do that without undermining the intent of the scene," Jacobson added.

In November 2014, Lawrence elaborated on his stance in an interview on HuffPost Live. "[Hoffman] had two scenes with dialogue that were left and we decided we didn’t want to try any kind of digital trickery with him, so we rewrote his scenes and gave his dialogue to other actors," he said. "He was one of the greatest actors, I think, of all time and I just think to try to fake a Philip Seymour Hoffman performance would have been catastrophic and I would never want to do that... I just think this was the best way to be able to get around such a horrible thing."

Hoffman's character, Plutarch Heavensbee, first appears in Catching Fire. In Mockingjay, he becomes not only a mentor to Katniss Everdeen (Jennifer Lawrence), but a vital figure in the revolution.

Lionsgate insiders told the Hollywood Reporter that Hoffman was unable to complete one final, major, emotional scene, but they were confident the film will end in a way that will satisfy fans, which is reassuring. With advances in technology, especially when it comes to the realm of movie magic, I think the saying should go "just because you can do it, doesn't mean you should." Boundaries and ethics are necessities, otherwise we're just left with highly uncomfortable and controversial memories of the dead (i.e., the Michael Jackson hologram at the Billboard Music Awards. Just no).

In the case of Hoffman, the filmmakers' decision to not delve into a CGI recreation and instead work with material already present was the best course of action. Mockingjay, Part 2 is one of the last films audiences will ever see Hoffman in, and I'm happy to know that his integrity as an actor will remain in tact, thus making the movie an appropriate tribute that grants closure for Hunger Games and Hoffman fans alike.