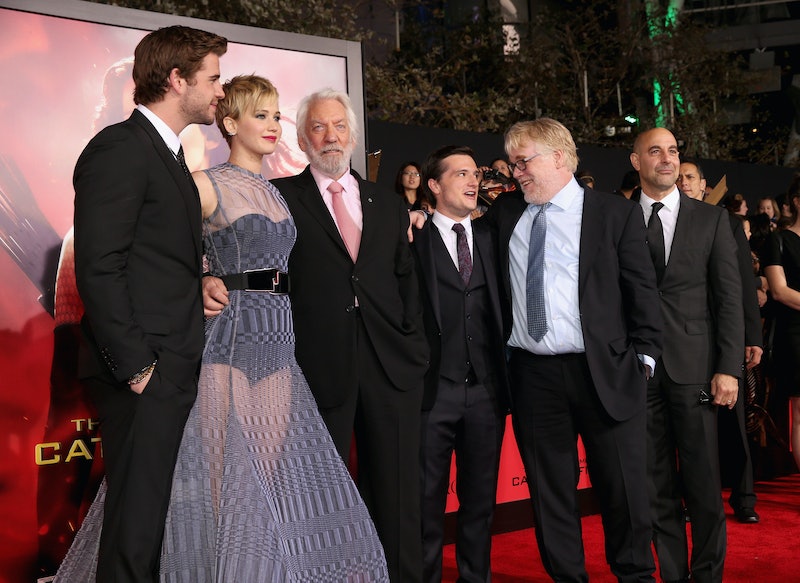 After Philip Seymour Hoffman's tragic death on Sunday, we were all wondering what will happen to his unfinished film projects — namely, his crucial role as Plutarch Heavensbee in the Hunger Games series. After the execution of former Head Gamemaker Seneca Crane, Hoffman's role took the lead in Catching Fire and Mockingjay, parts one and two, and will ultimately overthrow President Snow. Hoffman's character is vital, since he's the one who convinces Katniss Everdeen to take on the role of Mockingjay. So, we thought there were two unsettling options at hand, since Hoffman was still filming the second part of Mockingjay: replace him, or edit the script. Apparently, there's now a third. On Thursday, the NY Post reported that Philip Seymour Hoffman will be digitally recreated in a big Mockingjay scene that hasn't been shot yet.

According to the outlet, editors will use computer and camera tricks, instead of doing a script re-write, to film "at least one heartfelt scene" for Hoffman's character.

“You can do digital things; you can have conversations where you’re not focusing on him but the people he’s talking to,” an insider from the outlet reports.

I can only hope this is a rumor. This option is truly distasteful and would be unimaginably hard for Hoffman's friends and family to swallow. As such a renowned and legendary theater and film actor, reducing his voice and presence to any digital recreations is disrespectful, cheap, and doesn't honor his legacy. Hoffman is truly irreplaceable in this role, and editing his part out re-shapes and changes the book completely — but a digitized role from a groundbreaking actor who died a tragic death, or anyone who did, for that matter, just isn't appropriate.

It seems like digitization is the easy way out for studio execs to seemingly not have to compromise the film or book — but their choice actually is compromising everything. And the haunting question is: would Hoffman have stood for it that way?