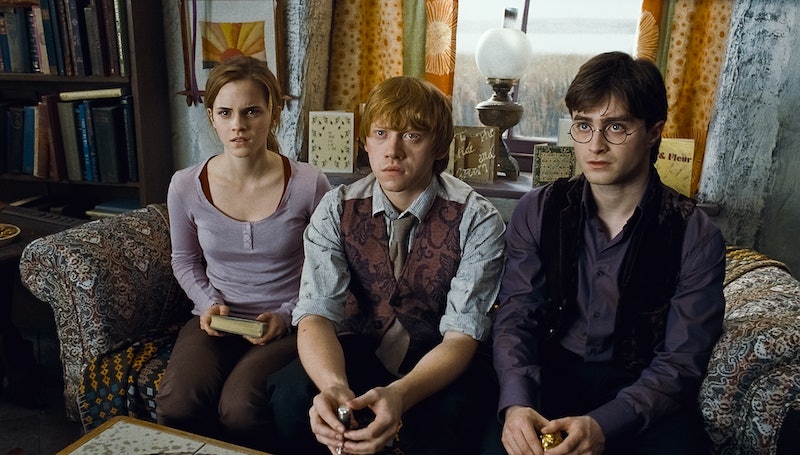 We're so separated from the Muggle world in Harry Potter that it is easy to forget that, according to J.K. Rowling's timeline, the entirety of the series took place from 1991 to 1997. I don't know what you guys were up to then, but for me it was basically potty-training, refusing to eat vegetables, and marathon-ing Rugrats in the living room with a Fruit Roll-Up jammed between my fingers. Little did I know that somewhere around the time I was learning that fractions were a thing, Harry and his squad were battling to the death for the sake of humanity and wizardkind.

Because of the isolation of Hogwarts, we never really stopped to consider that they were also living in a world without Internet, a world without smart phones and social media and Pizza Rat. I suppose when we were reading this when it first came out in the '90s, it was a lot easier to digest. I mean, hell yeah, I'd give up dial-up for a magic wand any day. But I can't help but wonder now that I'm older, wiser, and know how to operate a GPS — how different would Harry Potter have been if the series had come out today, in 2015? Here are all the things that would have been markedly different at Hogwarts if we were there today:

I'm not just saying this because we're addicted to them and we're a hot mess as a human species. I'm saying this because, logistically, if you packed up a bunch of kids and shipped them off to a place where they couldn't tweet or post on Facebook for ten months out of the year? Yeah, everybody would assume they were dead. For the sake of keeping up the secrecy clause, Muggle kids would be obligated to send at least one semi-shady "haha i hate reading shakespeare bc that is totally a class i'm taking nothing weird over here guyz" text once a month.

Nobody Would Ever Wear Dress Robes Again

You know how we look back on the '90s and cringe at our bandana crop tops, crimped hair, and giant neon windbreakers? I'm hoping that by 2015 the #hip #cool teenage population of the Wizarding World would reject the dress robe look the same way we abandoned wearing those bizarrely crunchy one-size-fits-all shirts. I get that it's tradition, but I think about 20 wizarding years is enough to buck it in favor of something you won't be tripping on all over the dance floor.

There Wouldn't Be Any Dementors Guarding Azkaban

Prisoners would be held by threat of force and getting blasted with music from a Muggle band called "Nickelback".

The Weasleys Would Be Divorced

Arthur's addiction to the Internet and lifelong pursuit of discovering a spell to harness free Wi-Fi would reduce his marriage to shambles.

Sure, working for The Daily Prophet is fun, but those juicy deets don't pay the bills, now do they? Ever the opportunist, surely Skeeter would be scuttling into the Kardashians' many mansions, lurking on the set of the next Hunger Games movie, creepin' all up in L.A. and New York to get the scoop. Yeah, it's Muggle money, but that's what the Gringott's money transfer is for.

Dudley Would Be Way More Employable

When you were raised on as much television as video games as he was in the early '90s, your options were pretty limited, unless you were going to make television and video games yourself. These days, getting raised on 24/7 technology means you've got the whole damn world at your fingertips. Dudley would have ended up working for Google or some jazz, all because his parents gave into his every whim whenever the latest laptop or smart phone hit the shelves.

Harry Would Have Totally Had A Fan Page On Facebook

Secretly set up by 11-year-old Ginny, who learned how to use Facebook despite her father's incompetent understanding of it ("The Muggles have a book for faces, it's really quite clever"). It would then abandoned early in her third year and picked back up by the Creevey brothers, and then deleted in Harry's fifth year when people started spamming the crap out of it.

Or worse — some Muggle-born set it up in 2006 when Facebook first launched, and Harry would have stumbled on it in the school library pre-Hogwarts during yet another failed attempt to Google his parents' deaths. (Sorry for the feels.)

The carpal tunnel would get so extreme that disemboweling Snape's dried toads seemed like the good ole days.

Tell me Fred and George wouldn't have found some magical way to capitalize on that. TELL ME THEY WOULDN'T. Maybe their heads pop up in the Floo network and you swipe on them. This is clearly the worst idea of all time, but it might prevent the YEARS OF PUREBLOOD INBREEDING from accidentally happening all over again.

Global warming + indiscriminate destruction of everything green on our planet = :(. Our bad, Firenze. But hey, at least the new wizarding retirement community doesn't block TOO much of the view of your fellow magical animals starving to death!!

All American Squibs Would Have Ex-Patrioted To The UK

If only to avoid being accidentally called J.K. Rowling's new American equivalent of "Muggle": a "no-maj." I'll tell you this, J.K.: Immigration laws are no-maj for us now.

The Books Would Be About 75 Percent Shorter

Here's a basic rundown of a 2015 plot: Exposition, more exposition, arrival at Hogwarts, problem arises, problem is immediately solved because Hermione Google'd the sh*t out of it — END. Aaaand, good night.

More like this
16 Novels That Paint A Realistic Portrait Of Abortion
By K.W. Colyard
Neil Patrick Harris Will Play 'Doctor Who's “Greatest Enemy” Yet
By El Hunt
Annie Lord’s Memoir Will Make You Believe In Love Again
By Shahed Ezaydi
Ottessa Moshfegh Is Happy To Be Your “It” Girl
By Arya Roshanian
Get Even More From Bustle — Sign Up For The Newsletter