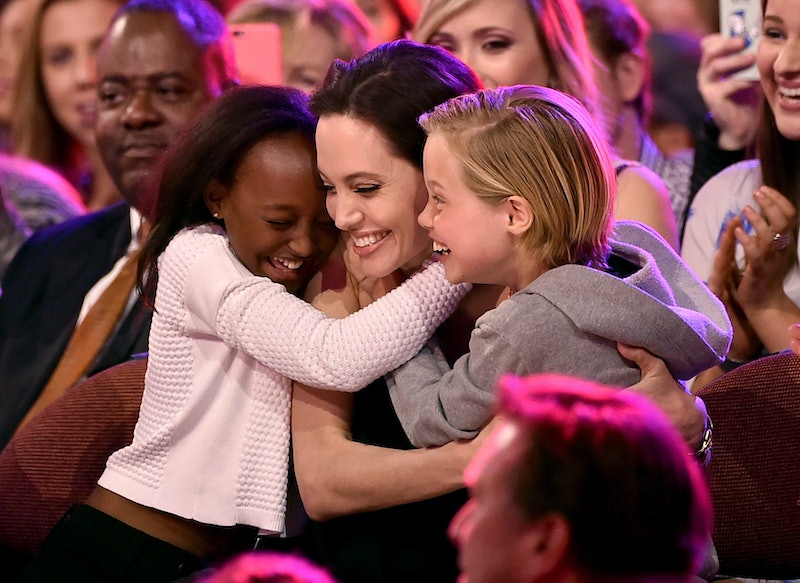 By the Sea, the new drama written and directed by Angelina Jolie Pitt starring the actress and her husband Brad Pitt, is certainly a family affair. Pitt and Jolie Pitt have not starred in a film together since their 2005 hit Mr. & Mrs. Smith — the film which infamously birthed "Brangelina" and led to one of the most revered modern Hollywood power couples. In the 10 years since that movie's release Pitt and Jolie Pitt have grown their family — they have six children: Maddox, Pax, Zahara, Shiloh, Vivienne and Knox — and gotten married. It would make sense, then, if the Jolie-Pit kids were in By the Sea alongside their parents, but actually, none of the children make an on-screen appearance.

Jolie Pitt and Pitt might play a married couple in By the Sea , but fans shouldn't expect an "art imitates life" scenario. None of their six children appear in the film, despite past involvement in their parents' films. Vivienne made her big screen debut last year as a young Princess Aurora opposite her mother in Maleficent, and Maddox played a zombie in his dad's World War Z (2013). Shiloh also appeared in one of her father's movies, playing a baby Caroline in The Curious Case of Benjamin Button (2008). Even though three of their six children have had some experience acting, Jolie Pitt and Pitt have expressed hope that their children choose a different profession.

"Neither one of us want our children to be actors, Brad and I," Jolie told the Daily Mail in 2014. The star insisted that she only consented to have Vivienne in Maleficent because she was the sole child not afraid of her in costume, adding, "I only put her in the film because the other children her age would be scared of me because I looked quite scary in [costume]. In the scene, little Aurora has to really want to be near me and be loving to me, and I had to be quite mean."

The fact that none of the Jolie-Pitt children appear in By the Sea is probably by design. The film takes place in the 1970s and is far from the picture of a happy marriage. In the film Jolie Pitt and Pitt play Vanessa and Roland, a couple who arrive in the South of France looking to deal with their grief. Not quite the subject matter you want your kids around.

However, Maddox, their eldest son, did work on the film behind the scenes as a gofer. And, it appears that he might have been bitten by the movie-making bug. "He'd be there for the lighter scenes or funnier ones, but obviously we had a rule that for certain scenes he was on lockdown, not on set," Jolie Pitt told the The New York Times . "I remember one day I was in my robe, my mascara was running down my face, my hair was still in curlers, and we ran into each other in the hallway. He just shook his head, like, 'Wow, Mom. Nice.' This business, I grew up in it myself, so I'd almost be happier if the kids weren't interested. But he loved it."

So while there may be no Jolie-Pitt kids on-screen in By the Sea, know that at least one of them had a hand in the movie's making. Nothing like a family affair, right?