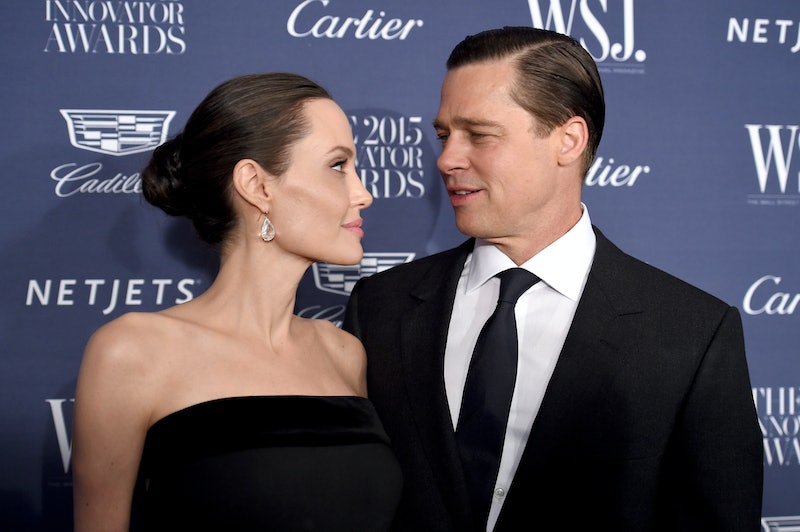 First came the "casual" marriage, then came the "dorky" parenting for Brad Pitt and Angelina Jolie. At least in Jolie's words, that is. Jolie and Pitt have opened up about their domestic life together in a new interview with WSJ magazine, and revelations about the superstar actors' parenting style might surprise you a bit. Angelina Jolie revealed she and Brad Pitt are "dorky" parents, and the context behind her confession just might melt your heart a little bit.

In the interview, Jolie said, "We wake up, we make breakfast. In our domestic life, we’re Mom and Dad. And often we’re dorky Mom and Dad, which the kids find ridiculous." Pitt said,

When Angie has a day off, the first thing she does is get up and take the kids out. This is the most important "to do" of the day. No matter how tired she might be, she plans outings for each and all. She has an incredible knack for inventing crazy experiences for them, something new, something fresh. I may be the bigger goof of the pair, but she invents the stage.

Well, if that is what "dorky" parenting is, that sounds pretty amazing. It's so heartwarming because in their case, "dorky" parenting seems to mean creating new and fresh experiences for their children, but in a mellow setting rather than a chaotic one. And that's important considering how hectic their lives are.

The actors are showing their family that not everything is all-glamour and all-Hollywood all the time. While Jolie and Pitt are obviously still big-time movie stars and still making moves in the industry, they are going to have moments in their lives that aren't red carpet or gossip column worthy. And it's wonderful to know that many of those quieter and more low-key moments are being spent with their kids.

Pitt and Jolie are making time for their kids to have an actual childhood, which is so important. It's one thing for an adult to take up space in the spotlight, but it is quite another for a young child to join them. Though it is inevitable that the children will be in the limelight in some instances, particularly at high-profile events and paparazzi hotspots, it is fantastic that there is a space for them in a mellow setting without the cameras flashing.

That being said, just because the kids are being brought up in a "dorky" mellow atmosphere does not mean that their lives have to be boring. As Pitt points out, that's far from the case, since Jolie is taking the time to take the kids out on new, unexpected adventures each day. Dorky parenting sounds like parenting done right!