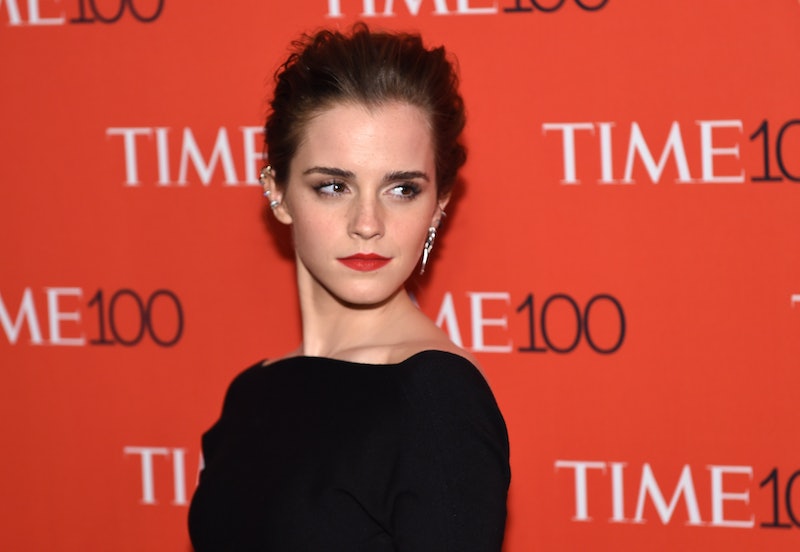 On Wednesday, an eye-opening interview took place between Emma Watson and Malala Yousafzai, where the two chatted about the documentary He Named Me Malala, women's education, and many other issues. One particular part of the interview is making headlines thanks to Yousafzai saying she is a feminist because of Watson and the actress' United Nation's speech for the #HeForShe campaign. Their interview is beyond inspiring and proves that Watson and Yousafzai need to work together on tackling important women's issues across the globe. These two would be like a real-life superhero duo.

It's no secret that Watson continuously stands up for women and fights for gender equality. As for Yousafzai, ever since the day she spoke up for girls' education in Pakistan and was shot in the head by the Taliban in 2012 for it, she's become a hero to many. She even became the youngest Nobel Peace Prize winner at age 17 and was chosen for her "struggle against the oppression of children and young people, and for the right of all children to education."

Both Yousafzai and Watson continue to be inspirational activists trying to make the world a better place for women of all ages. Here's hoping they soon join forces and tackle some important women's issues together, including the ones listed here.

Yousafzai is already doing this through The Malala Fund, an organization dedicated in helping girls "complete 12 years of safe, quality education so that they can achieve their potential and be positive change-makers in their families and communities." It's all about empowering girls and their voices. Imagine if Yousafzai and Watson united on this front and just how big of an impact they would most definitely make.

Like Yousafzai, Watson works hard in creating a better world for women. Through the #HeForShe campaign, the Harry Potter star strives to change the inequalities and discriminations women and girls face daily, including the gender pay gap. Yousafzai and Watson have two strong voices that could do even more good for gender equality.

Women are presented with even more opportunities than ever before in 2015, especially in the United States. Unfortunately, stigmas and double standards still remain when it comes to women in all areas of life. As for other areas of the world, women and girls continue to fight for their rights, including voting. By speaking up for women across the globe, like they already do separately, Watson and Yousafzai could absolutely make a difference, no matter how big or small.

Some might not consider this an issue, and it isn't, especially when you compare it to gender equality and girls' education. However, good could come from shining a positive light on feminism and proving that the word isn't a negative one. Actually, it goes hand in hand with gender equality, because by definition feminism is the belief men and women should have the same social, political, legal, and economic rights. Clearly, Yousafzai and Watson are already impacting feminism thanks to their interview, but they could — and I have no doubt will — do even more. With that said, let me leave you with this quote from Yousafzai to Watson:

Then after hearing your speech I decided there’s no way and there’s nothing wrong by calling yourself a feminist. So I’m a feminist and we all should be a feminist because feminism is another word for equality.

It's wonderful to see two women coming together, impacting the world, and showing girls and women that it's OK to want the best for themselves.