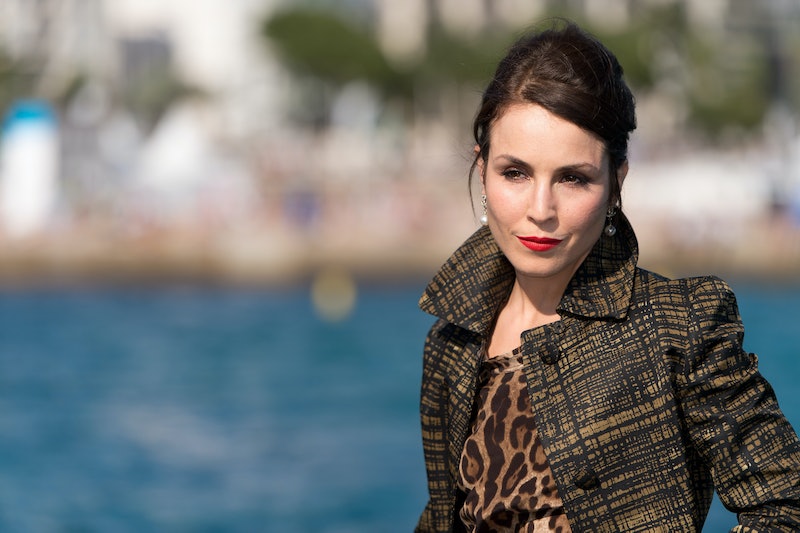 The Hollywood Reporter has revealed that a biopic about Amy Winehouse is now in the works. The soul singer passed away from alcohol poisoning just four years ago, in 2011, but her troubled story has already been plumbed in this summer's acclaimed documentary, Amy . The success of that film paved the way for this fictionalized account of the singer's life, simply titled Amy Winehouse, for which star Swedish actress Noomi Rapace is reportedly in talks to star. Those reading this news likely have one very important question: Can Rapace sing?

It's a fair question. Although she attended theater school in Stockholm, it's unclear whether her training included extensive singing or vocal lessons. Although Rapace has been acting steadily in both Sweden and the United States for almost two decades, her roles have trended more towards high-adrenaline action movies and gritty sci-fi thrillers (The Girl With The Dragon Tattoo, Sherlock Holmes: A Game Of Shadows, Prometheus) than glitzy musicals and elaborate song-and-dance productions. There's no question that the woman who portrayed Lisbeth Salander can act the hell out of her role as Amy Winehouse — heck, she even looks the part — but can she do her iconic songs justice?

Thankfully, there are signs that indicate Rapace will be able to pull this off. Interestingly enough, this isn't the first time the actress has been approached to play a famous singer in a biopic. It isn't even the second! In 2011, shortly after the Sherlock Holmes sequel had premiered and Rapace was busy shooting Ridley Scott's Prometheus, it was announced that she was going to star in a movie based on the life of iconic Swedish songstress Anita Lindblom. The film, from Twilight director Catherine Hardwicke, would have focused on Lindblom's turbulent love affair and marriage to boxer Bosse Högberg. However, no word has been heard of it since its original announcement and it doesn't appear as an upcoming project on the IMDb page of anyone involved.

More recently, Rapace signed on to star in a biopic about famous Greek-American opera singer Maria Callas, and her 20 year affair with shipping magnate Aristotle Onassis — which only ended when he broke it off to marry widowed First Lady Jacqueline Kennedy. Written and directed by Niki Caro, Callas is currently in preproduction and was shopped to distributors at this May's Cannes film festival.

The fact that Rapace has been approached to star in three separate films about musical legends implies that the movie star is perhaps hiding some amount of previously untapped singing ability. But, even if this isn't true, even if she is only being approached because of her acting talent or her physical resemblance to the subjects in question, that's not necessarily a deal breaker. For every actor who actually does his or her own singing for a musical biopic (Joaquin Phoenix and Reese Witherspoon in Walk The Line, Tom Hiddleston in I Saw The Light), there are others who simply lip sync to actual tracks (Marion Cotillard in La vie en rose , Jamie Foxx in Ray ).

It's not a done deal that Amy Winehouse will even contain any music by Amy Winehouse, anyway. The Hollywood Reporter mentions that producers are still in talks with the singer's father, Mitch Winehouse, to obtain the rights to his daughter's songs. If he should decline for any reason, we could be looking at another Jimi: All Is By My Side , the 2013 Jimi Hendrix biopic that didn't actually include any music by the artist in question due to rights issues.

Will Amy Winehouse feature songs by its titular subject? Will Noomi Rapace sing them herself, or lip sync to Winehouse's voice? Will it be more like Michel Fassbender's Steve Jobs, or more like Ashton Kutcher's Jobs? Will it even get off the ground, or will it fade into obscurity like Rapace's Anita Lindblom biopic? Or will Amy Winehouse lead Rapace to an Academy Award, like Cotillard eight years ago? All these questions promise that — no matter what the outcome — Amy Winehouse is a project to keep your eye on.

More like this
Yes, That's Lindsay Lohan's Sister Singing In The 'Falling For Christmas' Movie
By Radhika Menon
The 'Love, Lizzo' Harry Styles Scene Is Just 1 Moment That Made Fans Feel Seen
By Brad Witter
This James Bond Event At Abbey Road Studios Was A 007 Fan's Dream
By Samantha Rollins
Taylor Swift Fans Sue Ticketmaster For The Eras Tour “Ticket Sale Disaster”
By Jake Viswanath
Get Even More From Bustle — Sign Up For The Newsletter