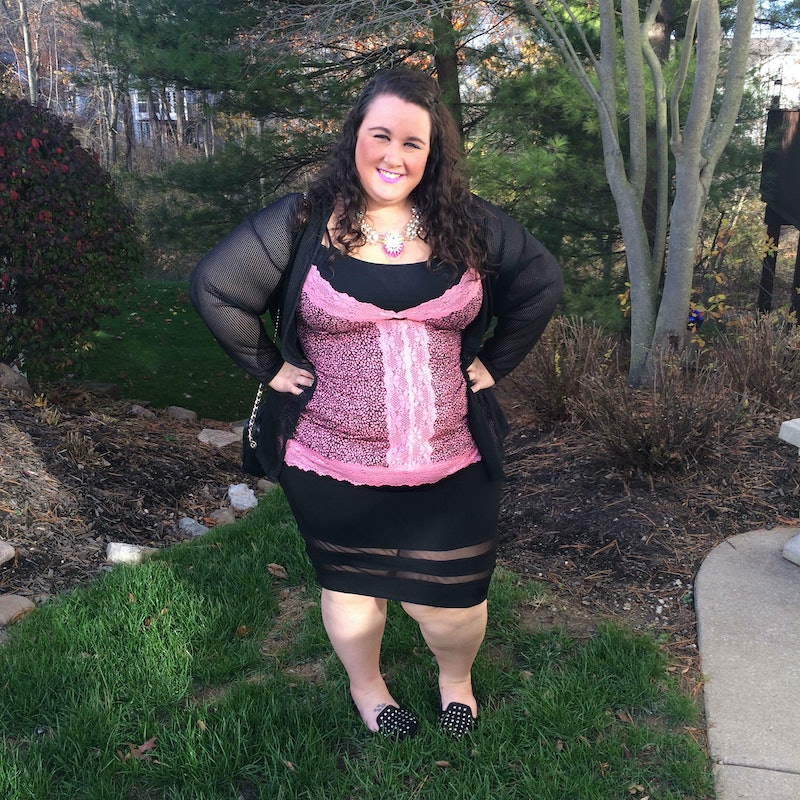 If there's one thing that being a '90s kid taught me it's that slips and camisoles make for totally acceptable tops. When I first started thinking about the 2015 lingerie as outerwear trend there was definitely something about it that didn't feel so new. I'm totally being transported back to the days where I twisted my hair back in butterfly clips and wore a teal cotton camisole with lace trim to middle school.

When I think about it now, I'm surprised I never got a single dress code violation in middle school (though I did get detention for talking too much). Thanks to the Spice Girls, slip dresses and baby doll dresses were all the rage and I didn't think twice about there really being any sexual suggestiveness behind these pieces. But as I grew up and came into my sexuality, my relationship with lingerie got more complicated.

Since I struggled with the idea of being seen only as a sexual object even in just a fitted T-shirt and leggings, lingerie was out of the question for me — in the bedroom or outside of it. But I hate feeling like I have limitations in fashion. It's been a journey to learn to love lingerie and I longed for my carefree middle school self who thought she was a younger, fatter Posh Spice. So I decided that I was going to break my own self-imposed restriction and create a new narrative for me and lingerie. What better way to do it then wearing it as outerwear for seven days straight?

The discomforts I still have with lingerie are pretty evident in this image. I basically put on the most covered up outfit I could find and then put a vintage floral camisole I had gotten from the thrift store on top. It's a challenge to find plus size lingerie at the thrift store — this was an XL, which didn't quite fit my 3X bod. There was nothing sexy or comfortable about this look for me and I knew I had over-compensated with covered-up styling in attempts to ease my own discomforts.

I really didn't see anyone all day while I was wearing this since I work alone from a studio space until my best friend came to help me package some orders. Her first reaction was, "Is it still dress like a grandma week?" Welp. I guess I had achieved the whole not being seen as a sexual object thing, but something about this look made me feel like I was still hiding.

Discouraged from the day before, I decided to pull out a piece I was sure would be the star. I put a leather moto vest over it and hoped that today would be better. After all, I thought, this slip basically looks like a dress. When I got to brunch my mom said, "I like that dress but it looks like a slip," while her friend politely remarked, "I love that dress! I had no idea it was a slip" after I explained the experiment. So maybe it wasn't passing as a dress as well as I had initially thought it would.

If I did wear lingerie in the bedroom, it would probably never be something this long. It was sort of laborious to wear a slip like this all day. I kept getting it caught on things and it was hard to get in and out of my car. When I got to my boyfriend's place later that evening, the confidence I felt in this slip had mostly turned to annoyance. He quickly commented, "Is that a dress or a nightgown?" I replied "It's a nightgown technically but I think it really looks like a dress." His response was pure gold: "OK, Rue McClanahan," referencing the actress who played Blanche Devereaux on the Golden Girls. She was devastatingly glamourous and probably wouldn't have been half as annoyed as I was wearing this dress/nightgown.

They say red is the color of confidence, so I figured this red lace bralette was my ticket to getting into the swing of this whole lingerie as outerwear thing. Even though I was wearing a tank top underneath the sheer lace bralette, my actual bra was also showing most of the day. I really liked this look.

My boyfriend said, "You could go to work in that outfit" which kind of shocked me mostly because I got in trouble at the last 9-5 job I had for wearing jewelry that was "too loud." I can imagine the lace bralette/actual bra showing combo wouldn't have gone over well there. When my best friend arrived at my studio later that day, her comment was oddly similar to my boyfriend's. She said, "It's like a suit but not." So maybe the key to dressing like lingerie as outerwear is channelling Romy & Michele during the Post-Its scene.

Feeling like I should I ask for the business woman special, I went to dinner with my best friend. Her opinion on my look changed as we sat across from each other at dinner and she remarked, "Your boobs are out. Like, they are sitting on the table." And I was quickly brought back to the reality that I was wearing a bra as a shirt.

The day that I had dreaded had finally come. I had to go to dinner with my parents and my aunt and uncle at their country club while wearing lingerie as outerwear. This was going to be a challenge. I went to my underthings drawer and found this Delta Burke camisole that still had the tags on it (not surprised about that). It was a 3X but there was no way I could wear it in public without a tank underneath because the way it hit me on the chest area didn't cover very much.

I wore it to run errands with my best friend who didn't have any smart comments to say about it this time. My mom called me as we were about to head out to dinner and said, "You better come home so you can change out of that nightgown." For the sake of this experiment and because I really didn't find this to be that sexy or daring, I told her that wasn't going to happen.

And when we got to dinner, no one commented on my outfit until my mom decided to point it out. My dad said, "I thought it looked like something that belonged on the inside but I figured there was some story behind it." Nailed it, Dad.

I worked from home in my pajamas this day, only leaving the house to meet my best friend at the gym for some water aerobics. As I was leaving, I quickly threw on a cream camisole I had gotten from the thrift store. It had a very vintage '50s feel which is admittedly not my style but I figured that I could find a cute way to style it. Maybe a fitted pencil skirt and blazer, I had thought initially. But instead, I threw it on over my bathing suit with a flannel and some joggers. My best friend's comments were spot-on: "You look ridiculous."

Determined to turn the rest of this experiment around, I took a different approach on day six. I wore this sheer mesh crop top from Sugarcoma Clothing with my favorite bra from Curvy Couture Intimates. I threw on this sweater from Hey Gorgeous so I was a little more covered up. Since I wasn't actually wearing lingerie so much as just showing my entire bra, I felt the most comfortable in this outfit.

When I asked my mom to take my picture, she had nothing bad to say. She did tell me that I needed to open my sweater more so you could see my bra more so cheers to her for being a good sport. As I went through the day, no one really had anything to say about this look, perhaps because this was closest to something I would wear anyways.

It was the last day of wearing lingerie as outerwear and I had actually run out of lingerie to wear. I went back to my underthings drawer and found this camisole that had to be from around 2007. It definitely didn't really fit but I needed something so I went with it. I figured if I paired the camisole with a massive tutu skirt from plus size styling company, Dia&Co, no one would really notice the camisole right?

Well, that theory worked, sort of. The tutu made me feel powerful. But when I arrived to the mall with my mom she commented, "We should probably take your photo outside in case you get us kicked out of the mall." Insert all of the eye rolls here. We didn't get kicked out of the mall and no one really had anything to say about it until we were walking through the parking lot back to our car and someone rolled down their window and yelled, "Your outfit is cute ma'am. I really love it." That was an unexpected surprise.

When we met up with my best friend for dinner, she made another comment about how my boobs were hanging out, but also said that I looked like Carrie Bradshaw in the Sex and The City opening. And when I thought about it, she was kind of right.

After a week of wearing lingerie as outerwear, the one thing I realized is that it really wasn't that big of deal. On some days, I was more covered up than usual and on other days, I had more cleavage than I would normally show. I wasn't fooling anyone into thinking this wasn't lingerie — and that was OK. Throughout the experience, I never felt overly sexualized as I assumed I would. Wearing lingerie all day for seven days in a row made me see it as more of a chore and an annoyance, but that monotony also helped to remove some of the fear and discomfort that I felt with lingerie. I probably won't make it a regular part of my everyday wardrobe, but it's no longer as out of the realm of possibility as it was before I began. I do have a newfound appreciation for the Spice Girls' ability to wear slip dresses and camisoles with sky-high platforms. Girl power, for real.