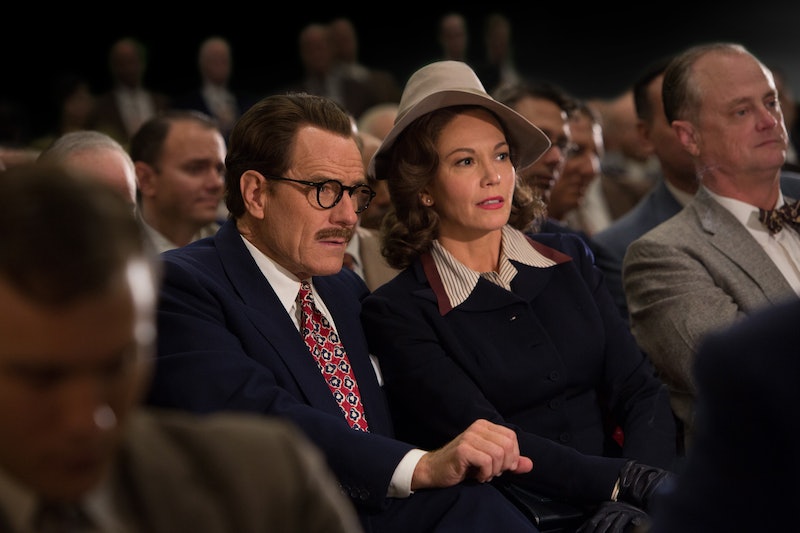 Playing the wife of famed blacklisted screenwriter Dalton Trumbo is a tall order, but Diane Lane was up for the challenge. In Trumbo , Lane stars alongside Bryan Cranston as Cleo Trumbo, who was held in contempt of Congress, and then barred from Hollywood, in the late '40s for not admitting that he was a communist. Cleo was essentially Dalton's emotional foundation when he was banned from writing screenplays along with a group of other screenwriters known as the Hollywood 10, but she was far from just a background figure and has her own point of view in the film, something that Lane tells Bustle she's thrilled about.

"I have noticed the fact that patriarchy is drawn into question, and that’s a relief because I think that women seen as the underdog or the perspective of the female experience is becoming less and less filtered through the male experience," the actress says. "It’s becoming mainstream rather than fringe."

But, she adds, "I say that as a trend. I’m not saying that we’ve accomplished it."

Lane says that Cleo's place in the movie (out Nov. 6) is more than just the woman behind the man, adding that including the female point of view in male-driven tales offers a tremendous amount of storytelling possibilities. "I think that show business is always looking for product and lucky for me and all women, we’re suddenly recognized as interesting," she says. "When I say suddenly, I say that with quotation marks around it. I’m witnessing it as much as I’m participating in it."

And the role of Cleo is a meaty one. Before Dalton's blacklisting, Cleo wasn't directly in the public eye like her husband, but she was a child of show business and a talented woman with unusual skills, such as juggling glasses and acrobatics. Lane says that her character's skills had entertainment value that served the family well and broke "the spell of this black cloud over the household" during their difficult time. They certainly needed the levity; the blacklist was a major blow to Trumbo, and a terrifying situation for the family. While the banning of screenwriters for their beliefs may be a crazy idea in 2015, Lane says that she thinks that the widespread saturation of social media and lack of anonymity makes the story of Trumbo as relevant in Hollywood as ever.

"You can see that people become shunned or get publicly loved for their indiscretion or stumbling or secrets getting revealed," Lane says. "There is an alternate universe that exists now where these things play out, but I do think once you’re in the public eye, it’s a daunting prospect because you can feel as though you’re afraid to cut yourself shaving your legs because you’re in a shark tank."

Continues the actress, "People getting on people’s political beliefs or religious beliefs or any of the other things that the First Amendment protects, it’s just a shock to realize that patriotism can be held hostage by whatever perspective a media outlet has on it."

So while Trumbo may be a period piece in many ways, it certainly rings true today, both in its eerie themes and complex cast of characters.