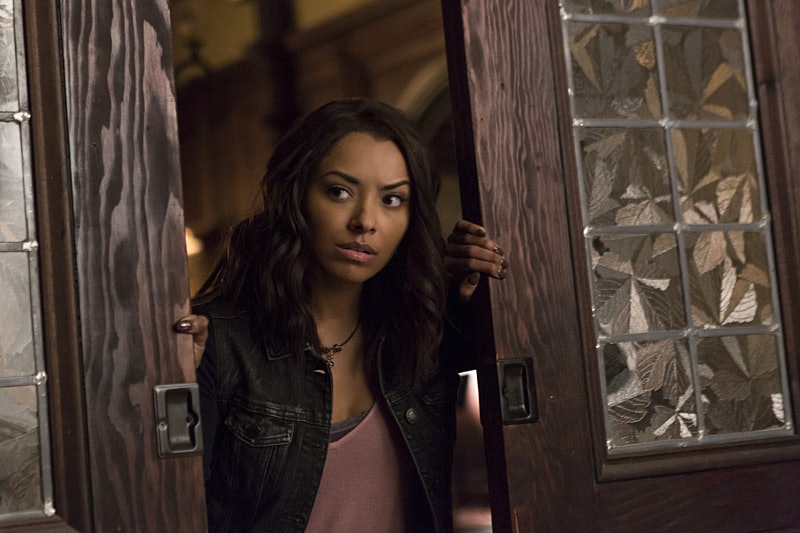 Kat Graham had promised fans that Bonnie would be getting a love interest on The Vampire Diaries and that he would be someone we all knew and loved. Well, the actress made good on that promise during Thursday night's episode "Live Through This" when it was revealed in the latest TVD flash forward that Bonnie and Enzo are together in a romantic capacity in the future. Michael Malarkey had teased to Bustle a few weeks back that Enzo would be getting a very familiar looking love interest, but I thought he was referring to Lily or Future Caroline, who we all know is engaged. So I have to admit I was a little shocked by this particular pairing, especially since they've rarely had any scenes together in the past, especially lately. But that's not to say that they won't make for quite the dynamic duo.

Like most of the other flash forwards thus far, the scene itself was pretty brief and still left us with way more questions than answers. (But hey, that's all part of the fun, right?) However, this quick glimpse into the future still managed to provide us with a few interesting details to add to this assorted time jump puzzle. Aside from just the initial shock of them being together, we also learn that Bonnie is going through a rough patch regarding a mistake she made that cost someone their life. In fact, she has herself checked into what looks like some sort of hospital as an attempt to deal with it and move on. That is, until Enzo comes to get her, saying that she can't stay locked up forever. (This was immediately followed by a steamy make out session.)

It's an interesting tactic, letting the audience know something will happen before we even get a glimmer of it in the present day. I don't know what exact circumstances brought these two characters together, but if this is the end result, then consider this viewer officially intrigued. I can definitely see myself getting onboard with Team Bonzo. (Great couple name BTW.) Now let the 'shipping commence!