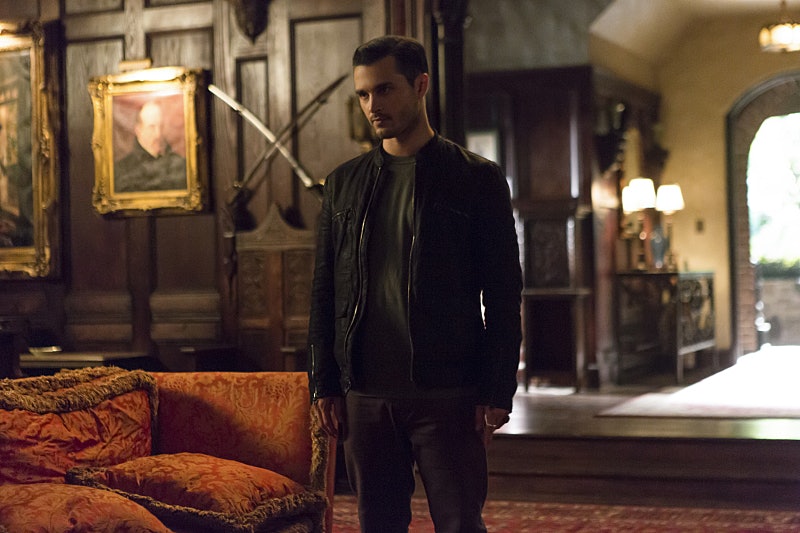 If there's one thing The Vampire Diaries prides itself in, it's knowing how to leave their audiences thirsty for more. And, that feeling has only become more prominent this season thanks, in large part, to TVD 's weekly flash forward scenes, allowing us to see what our Mystic Falls gang is up to three years from now. So far, we've seen glimpses of Damon, Stefan, and Caroline's futures (none of which are fairing all that well TBH), but according to Michael Malarkey, who plays Enzo on the show, these little time jumps have only just begun. During a recent interview with Bustle, the actor not only dished on a few tantalizing TVD Season 7 spoilers, but he also hinted at an upcoming Enzo flash forward that will involve a "fully explored" love interest.

"There's a flash forward into the future where we see Enzo's love interest fully explored," Malarkey teases. "We're going to see him linked up with one of the other female characters on the show." And, while he wasn't at liberty to discuss who this mystery woman may be, I couldn't help wondering if he is the fiancé from Caroline's flash forward. These two characters have always had great chemistry together on-screen, so it's not completely out of the question, especially since this mystery man seems to have strong ties to Mystic Falls. Enzo certainly fits that criteria.

Of course, there's always a chance that he could be referring to Lily, whom he only just recently confessed his feelings for. But I have a feeling TVD is going to go for the shock value on this one, so having it be Lily seems a little too predictable. Plus, Enzo isn't exactly fond of Lily's little Heretic family, which I'm sure will create a bit of tension between these two blossoming lovebirds. "I think he's quickly going to discover that [the Heretics] aren't all what they seem to be," Malarkey shares. "He becomes suspicious of one of them in particular and decides to track her and see what she's really up to, so he's going to start to be a little more active in the house and see what the whole deal is with these weirdos."

But, flash forwards and love interests aren't the only things fans have to look forward to in regards to Enzo's upcoming story arc. According to Malarkey, "something big" is coming up for all the characters and I'd bet my Phoenix Stone (just kidding, I can't afford one of those things) that it involves the assassin that seems to be after everyone in the future. But in the meantime, expect a whole lot of action. "We do see some pretty high-intensity scenes. There's a big fight scene coming up," the actor hints. The only question is, whose side will he be on? Because, according to Malarkey, Enzo is not past the point of redemption.

"There's loads of different elements to his character that we're going to see and viewers aren't just going to think 'oh, he's a bad guy.' I think this is just the kind of tip of the iceberg as far as the journey that he's going to go on this season."

I can't wait to see all of this unfold!