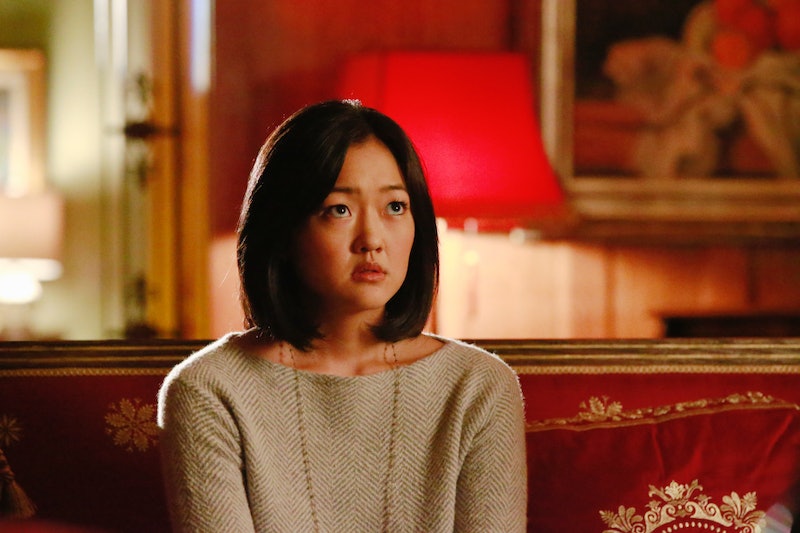 As of this moment in time, I don't know who is alive and who is dead on How to Get Away with Murder. In "Two Birds, One Millstone," it appeared that Frank killed Catherine, but HTGAWM has a knack for making the seemingly obvious just a ruse. Which is exactly what happened. After it looked like Frank transported Catherine's dead body to a forest to be found by your average hiker, it turns out Catherine wasn't really dead. So what actually happened to Catherine on HTGAWM ? And why did Frank have her in the back of his car like he was trying to get rid of her (something we know he does really well)?

When Frank left the hospital — after dramatically pleading for Annalise to make it out alive — he casually walks back to his car and looks in the back seat where a lifeless-looking Catherine is laying. Color me crazy, but she looked dead. Which I think is the point to her not being dead. Shonda Rhimes got us again. Anyway, so at the end of the episode, when Catherine comes back to life or just comes to, it was mega-confusing, because Frank appeared to be dumping her body.

So what exactly is going on with Catherine? As scary as it is, Frank is a pro at "taking care" of people. He wouldn't make the mistake of thinking Catherine is dead when she really isn't. Unless this show is going to jump the shark and bring in some supernatural aspects, then I think we can all agree that Frank knew that Catherine wasn't dead. But she was definitely out cold, which could mean that she was drugged or knocked unconscious.

If that is the case, then perhaps Frank and Annalise have staged everything going on just to kill Emily, the ADA. If Catherine was at the Hapstall mansion when Annalise and Emily were both shot and killed, respectively, maybe she saw something she wasn't supposed to see. Maybe, Frank and Annalise needed to make sure that she wasn't going to tell anyone anything — like Frank/Annalise/Wes/Michaela/Asher/Bonnie/Laurel/Connor/Oliver/Caleb/Nate killing Emily — so they hit her over the head (or drugged her, since she didn't seem to have any signs of injury) and took her somewhere remote, to confuse her.

That seems like a lot of effort to keep someone quiet, especially when the person dead was trying to prosecute Catherine for murdering her parents. So maybe the story is a little more convoluted. It makes sense that Catherine had something to do with the death of Emily, because if she was the one that hurt Annalise, Frank wouldn't have simply let her go free. So she must still be on the side of Team Keating, but perhaps it all comes down to being in the wrong place at the wrong time.