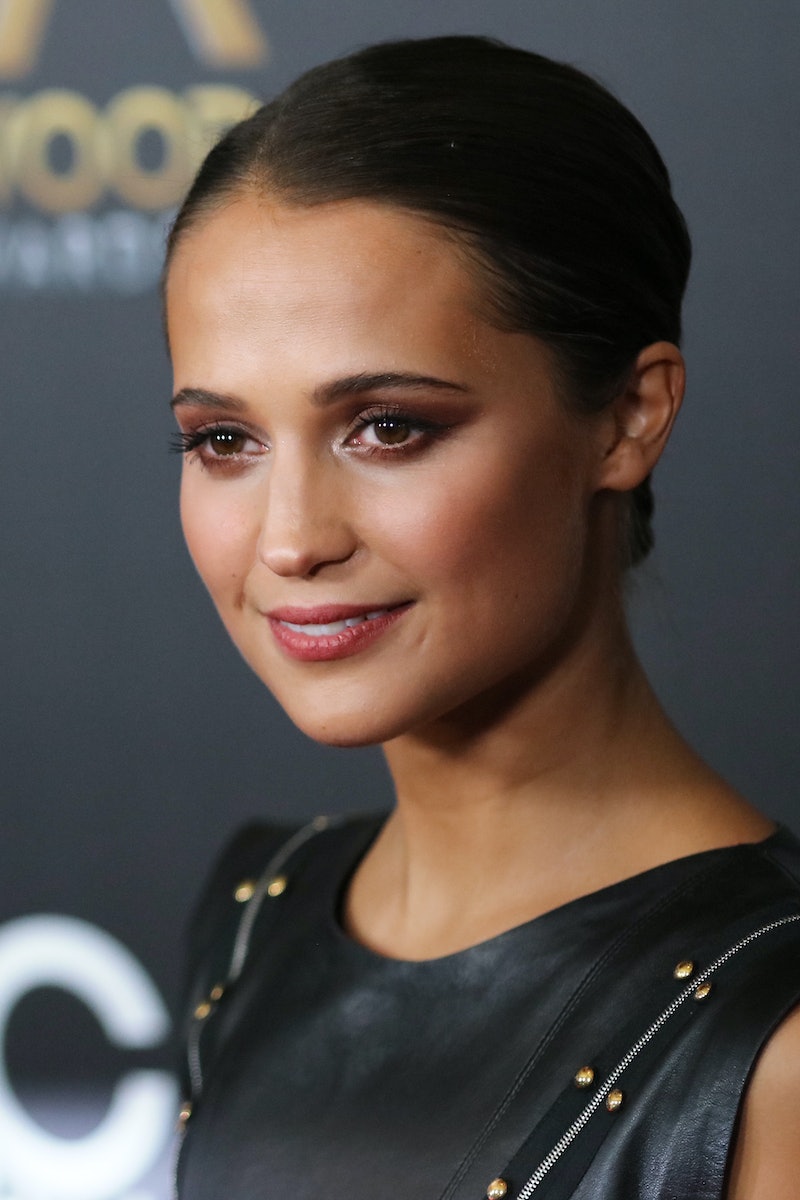 Good news, fans: Dreams of a Girl With The Dragon Tattoo sequel have finally started to become a reality. But, for those of you who don't like change, walk away now, because the sequel will be full of new faces — or at least, without old faces. Per The Hollywood Reporter, Rooney Mara won't be returning to the Girl With The Dragon Tattoo sequel as the lead, and Daniel Craig's won't be back either. As for whose been confirmed to replace them, the studio's still in talks with potential actors and actresses. According to The Wrap though, Alicia Vikander's already winning the race to replace Mara. Though I was personally bummed to find out Mara won't be returning — because seriously, how impeccable was her performance in the first installment?— I have to admit that Vikander's the next best thing.

You might recognize Vikander from this years The Man from U.N.C.L.E or Ex Machina, or you might have heard her name attached to the upcoming Bourne sequel. You might have even seen her alongside Eddie Redmayne in those stunning The Danish Girl trailers. Either way, she's a phenomenal actress, and she might be the only one able to bring the kind of gravitas and emotional nuance to Lisbeth Salander that this sequel needs to be successful. Even though, according to The Hollywood Reporter, the sequel will mark a kind of reboot to the previously adapted book franchise, the casting of Salander will be key in ensuring that fans can get on board with the flick. Good thing Vikander is the best possible Lisbeth Salander for the job. Here's why:

In order to adapt into the role of Lisbeth, Vikander will need to become almost unrecognizable, just as Mara had. Vikander can handle it though, as this wouldn't be her first rodeo on not looking like herself. Just take Ex Machina for example, where Vikander played Ava, an Artificial Intelligence robot that looked, well, not human at all.

2. She Has That Cold Expression Down

Mara's Salander was not the friendliest or warmest female antihero there ever was (though that sounds like a possible contradiction in itself). Vikander, with roles like Ava and German spy, Gaby in The Man From U.N.C.L.E, knows how to deliver that same Salander worthy coldness.

3. She Can Do Action Scenes

Obviously if she was nabbed to play a part in the upcoming Bourne project, Vikander's comfortable with action sequences. So if the The Girl With The Dragon Tattoo needs Vikander to, I don't know chase a man that stole her purse and then beat him up, I'm sure Vikander would be game.

4. She Can Look Conflicted

Like Salander, Vikander's roles have often centered around strong woman with contradictions, and inner demons. From Anna Karenina's Kitty to 2012's A Royal Affair, Vikander understands how to portray a female with many layers.

5. She Knows How To Play Calculated Roles

In Ex Machina's final moments (spoilers ahead!) we learn that Vikander's character was always out for herself, and though she might have seemed to care about certain characters along the way, it was all for show. The move was calculated, surprising, and just the kind of revenge Salander might have taken had she been in her spot.

6. She Doesn't Need To Say Much

For Vikander, it's less about what she's saying and more about how she's saying it — or better yet, what she's not saying. It's this kind of silence that makes Salander so compelling too.

7. She Always Has An Air Of Mystery

Just like Salander, Vikander's able to bring a layer of mystery to each of her roles. We never quite know exactly what she's thinking, and that's what's brilliant about her performances.

Though I'll definitely miss Rooney Mara as Lisbeth Salander, I can't wait to see whether or not Vikander picks up this role, and if she does, what kind of new and exciting things she'll bring to the table. After all, giving anyone in Hollywood a strong female role like Lisbeth Salander to work with, can never be considered negative in my book.