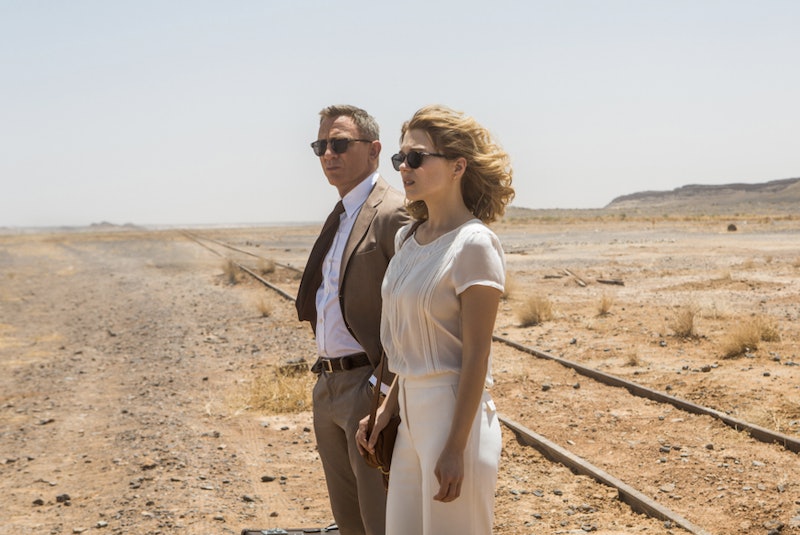 Even the most devoted James Bond fans have to occasionally wonder how one character, played by so many different actors in so many different styles, has managed to capture massive audiences for 53 years and counting. What magic lies in the makeup of 007 that keeps us coming back? Why and how do we still love James Bond, as a movie-going public, after all this time? It's a question I've asked myself more than a few times, and one that I posed to the cast of Bond's latest outing, Spectre.

The funny thing is that every single cast member I spoke to had a different answer. There doesn't seem to be a clear-cut reason that the name continues to thrill audiences worldwide, and while I suspect the Bond theme has a great deal of sway in the character's persistence, that's still not the whole story.

In Spectre, we find Bond following cryptic clues from M (Judi Dench) while new M (Ralph Fiennes) works furiously with the help of Moneypenny (Naomie Harris) and Q (Ben Whishaw), and the looming organization SPECTRE threatens life as we know it. Pieces of the story, and moments with this film's villain (played by Christoph Waltz), certainly feel like old Bond exploits, but I'm not convinced that familiarity is entirely the reason we keep coming back.

Luckily, the Spectre cast agreed to help me piece this mystery together.

Daniel Craig: It's An Event

"I mean that’s a hard one to nail down, and I know that what they’ve done over the years is that they’ve made the movies a spectacle. If you think about when these movies first came out, there was one movie like this a year: one action movie, and that was it," he says. "Now there are 20 to 30 action movies a year, maybe not that many, but there are certainly quite a few, and somehow Bond remains an event. It’s sort of mythical."

And it's true: These films come out and crowds flocks to see them. Even those who don't love the films could likely hum the theme song or utter Bond's famous lines (if you don't know "Bond, James Bond" you probably live under a rock). But there's more to it.

"They’re fun. The fact that they’re huge, they’re fantasies and we do all sorts of wonderfully silly things in the movie," says Craig. "But I know that what [director] Sam [Mendes] and I always just try to do because it’s where we’re from, it doesn’t matter how big the movie is, as long as there’s a heart in it and reality in it and the audience can cheer for the good guys and boo the bad guys, it’s gonna work."

Lea Seydoux And Monica Belluci: They've Got It All

I suppose you could argue that Bond is our most familiar spy, and with each update, he just gets more and more exciting. That's where Seydoux's camp seems to be: "James Bond films are so exciting because of everything, I mean the gadgets, the women, the costumes, the locations, the action, I mean there’s something very exciting about this character and the fact that he saves the world, in a way," she says.

For Bellucci, Bond's sense of chivalry is what shines through in each iteration. "Because he’s a gentleman, he’s actually, this film’s a real chivalry. He’s going to save my character and he’s going to save also [Lea’s] character," she says.

"It evolves, there are no two Bonds the same, nor should there be. It develops with us and with our time," says Waltz. While many elements of Bond stay the same — great suits, epic music, iconic one-liners — Waltz says the real staying power is in the series' ability to not get stale.

Bautista may play a villain in Spectre, but he certainly seems to be a fan of Mr. Bond.

"I think that’s just it, it’s a never ending story that’s just how it is. There’s always going to be new forms, new ways to play Bond, but I think he’s just a character that’s never really going to get old," he says.

And that seems to be what's at the heart of all of this: People still love Bond, because, well, they just do.