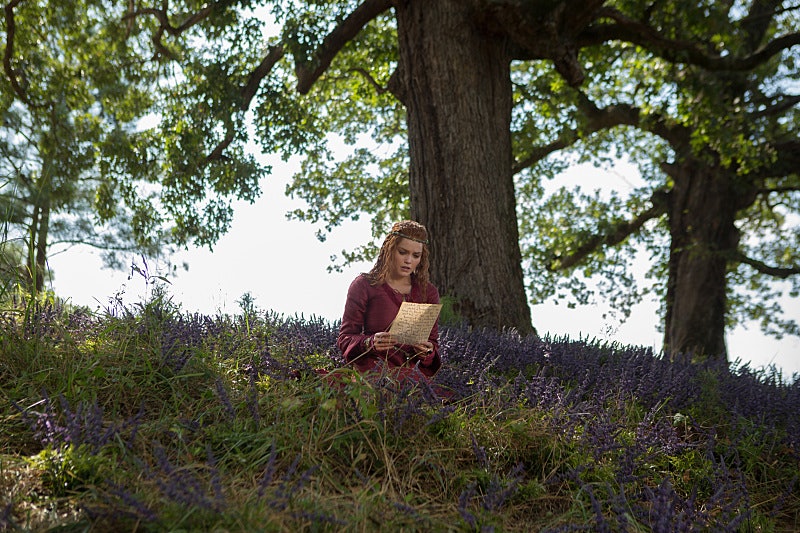 Aurora finally made her presence in New Orleans known on The Originals when she took a stroll down memory lane with her old lover, Klaus. Thursday's episode of The Originals saw Klaus and Aurora reuniting for the first time in 1,000 years, and it wasn't all rainbows and butterflies. In "The Axeman's Letter," Aurora came back into Klaus' life to drop a bombshell that seems to play into whatever Lucien and Tristan are up to. So, what is Aurora up to on The Originals ?Aurora didn't only go to New Orleans to see her ex, she came with a goal: to put a wedge between Elijah and Klaus. How, you ask? Well, it goes back 1,000 years, to when Aurora tricked Rebekah into turning her into a vampire so that she could live forever with Klaus. But, when the Mikaelson siblings were forced to go on the run after they heard their father was coming after them, she told Klaus that she didn't want to go, crushing him. "We could have been the greatest love story ever told," Klaus told Aurora. And, she agreed. It turns out, the reason she told Klaus she would never go away with him was because Elijah compelled her not to!

Having only recently turned other vampires, Elijah didn't really realize that, as an original, he could compel vampires. That is, until Aurora bragged about knowing one of Klaus' deepest secrets and Elijah demanded she tell him what it is. Klaus had confided in Aurora that he killed his mother, not his father, and when Elijah found out, he was so furious he screamed at Aurora to see Klaus as the monster he really is. For all these years, Klaus believed that Aurora had broken his heart, when really she had no choice. And, Elijah never came clean. At the end of the episode, it looked like Aurora had succeeded in tearing the Mikaelson brothers apart, but to what end? Whatever her agenda, Tristan didn't seem to know that she was in town, meaning her aims are likely separate from those of her brother. She also doesn't seem all that loyal to Klaus, meaning Aurora is truly a wild card.