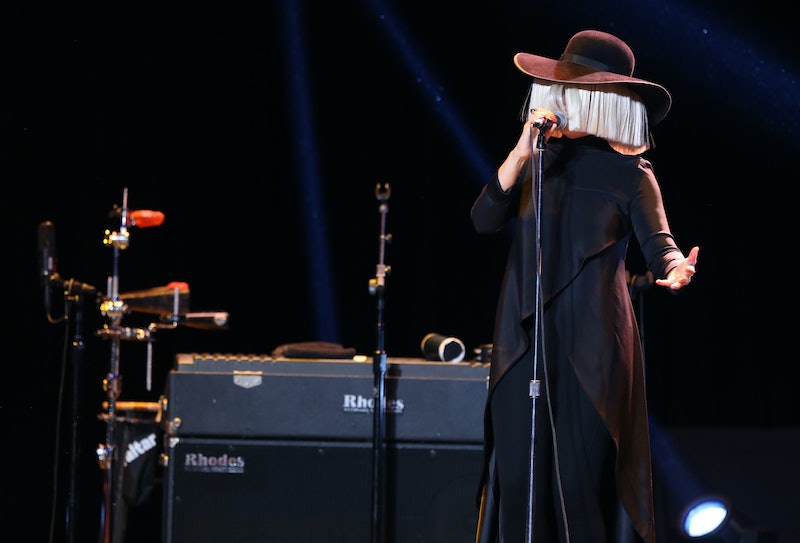 Earlier this year, Sia amazed viewers with her incredible performances of hit songs "Chandelier" and "Elastic Heart" with Maddie Ziegler on Saturday Night Live as musical guest. And she's back once again, this time with Donald Trump hosting the show. Sia performed "Bird Set Free" on Saturday Night Live and it was liberating. A dancer (who was not Maddie Zeigler) joined her on stage, standing while wrapped tightly in a black sheet — but don't worry, she'll eventually find her way out.

Sia took the stage after a small throwback skit between Trump and the musical guest from his 2004 episode, Toots and Maytals. the singer donned a long black and blonde wig along with a big black bow on top of her head. As Sia belted her new single, the dancer wiggled her away out of confinement and then hid behind Sia, mimicking arm movements, then finally emerging to take center stage. The dancer silently cried and looked as if she was shouting to the audience, which matched the song's chorus lyrics: "Shout it out like a bird set free." It also came at a great time — can we get set free from this subpar episode of SNL?

According to Billboard, Sia's two latest singles "Alive" and the just-released "Bird Set Free" were both intended for Adele's long-awaited upcoming album 25, which will be released and most likely rule the charts later this month. Adele and Sia worked together on the songs, which ultimately didn't fit in with 25 as a whole, but Adele told Rolling Stone that she enjoyed her first experience collaborating with another powerful woman on music. "I actually love the dynamic of us both being in there and just f*cking being bossy," she said. "And it's all these male producers, and they're all f*cking sh*tting themselves 'cause we're in there."

Instead, "Alive" and "Bird Set Free" will be on Sia's upcoming album This is Acting, which will be released in 2016, and, if these songs are any indication, I'm sure it's going to be awesome.