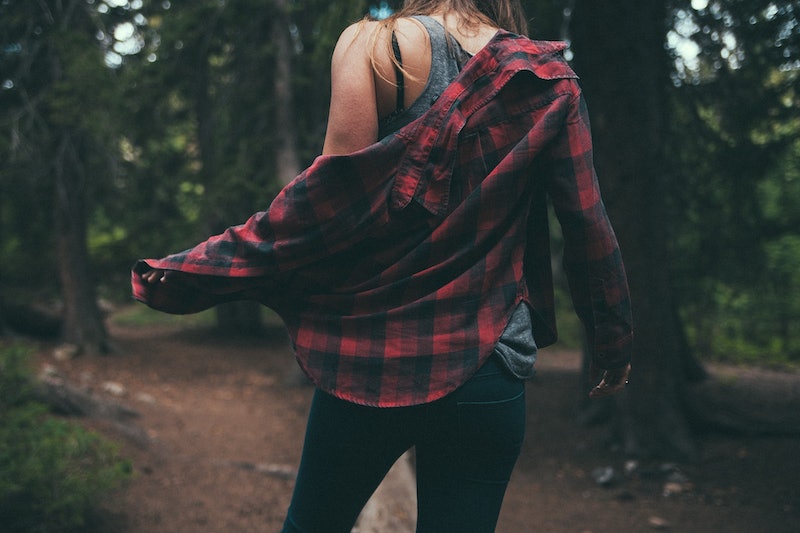 Every few years, a different past decade resurfaces in the form of a throwback trend treasure chest. As you might have noticed, the '90s are back with a vengeance. Kurt Cobain lives on in the style exuded by today's cool girls. The cropped top is back, the flannels are back around waists where they belong, and tresses are wavy and wild and free. But the '90s weren't all cool. There were plenty of styles that didn't come back, and for good reason. They stay locked away in disposable film and yearbook pictures.

Most of the fundamental differences between the cool '90s girl and the cool today girl are less about style and more about priority. Today's cool girl is much less superficial than the '90s girl. Today's cool girl cares about the environment, social change and justice, and gender equality. These causes and concerns drastically shape the way that today's cool girl styles herself and lives her life. She's into secondhand clothing and living a low-waste lifestyle. She wants to be taken seriously in the job force, she's proud of her body, and she lives without shame. She's open-minded and loves to switch it up.

Given the progressive trends, I can't even imagine how cool the next decade of girls will be. What will they be wearing while they hoverboard to school in the morning while drinking homemade kombucha out of a hand-blown mason jar? Until then, here are the major differences between the beloved '90s cool girl and today's cool girl.

'90s girl: A "Punky Brewster meets Kurt Cobain" mix-and-match print style was very in. Floral shirts synced with a flannel shirt around the waist and polka-dot pants was more than OK.

Today: We're all about mixing and matching prints, but we're less interested in looking like patchwork quilts and more interested in making a casual look translate into a chic look. Today's cool girl is more likely to wear a uniform floral pant suit than a hodgepodge mix.

'90s girl: Crimps were all the rage. The coolest chicks of the '90s slept in braids or used a crimper in the morning to achieve that mermaid look. Throw in a few butterfly clips to keep the hair out of your face and you were golden.

Today: We're all about the natural look now. Cool girls wear their hair however it dries — although they're not afraid to experiment with colors and pixie cuts and straight-up own them, either.

'90s girl: Once upon a time, there was a place called "the mall." It was a massive, popular structure housing dozens of stores and a food court. Teens would hang out there after school, eating soft pretzels, slurping slushies, trying on bras, and chasing their crushes around the food court.

Today: Today's cool girl is fluent in coffee and hangs in the most obscure, non-commercial cafes she can find. She's either talking with friends, reading Patti Smith's latest book, or listening to music and gazing contemplatively out the window.

'90s girl: Chihuahuas were the "it" dog. Everyone was after that mouse-like dog that was small enough to fit in a purse but large enough to wear a size small in doggy clothes.

Today: Today's cool girl is all about the rescue dog. She's much more aware of issues like shelter crowding and puppy mill sourcing. Today's cool girl has a mixed-breed pup that she's named after a city or song.

'90s girl: Among boys, there were JTT, Devon Sawa, and whoever was starring in the big Disney show at the time. Among gals, there were Jennifer Love-Hewitt, Gwen Stefani, and (duh) all of the Spice Girls.

Today: Today's cool girl is into a sophisticated, worldly type who thinks outside of the box and isn't afraid to speak their mind. There's Idris Elba, Emma Stone, Kit Harington, Jennifer Lawrence, Kerry Washington, Ryan Gosling (I could go on, but I don't have six years).