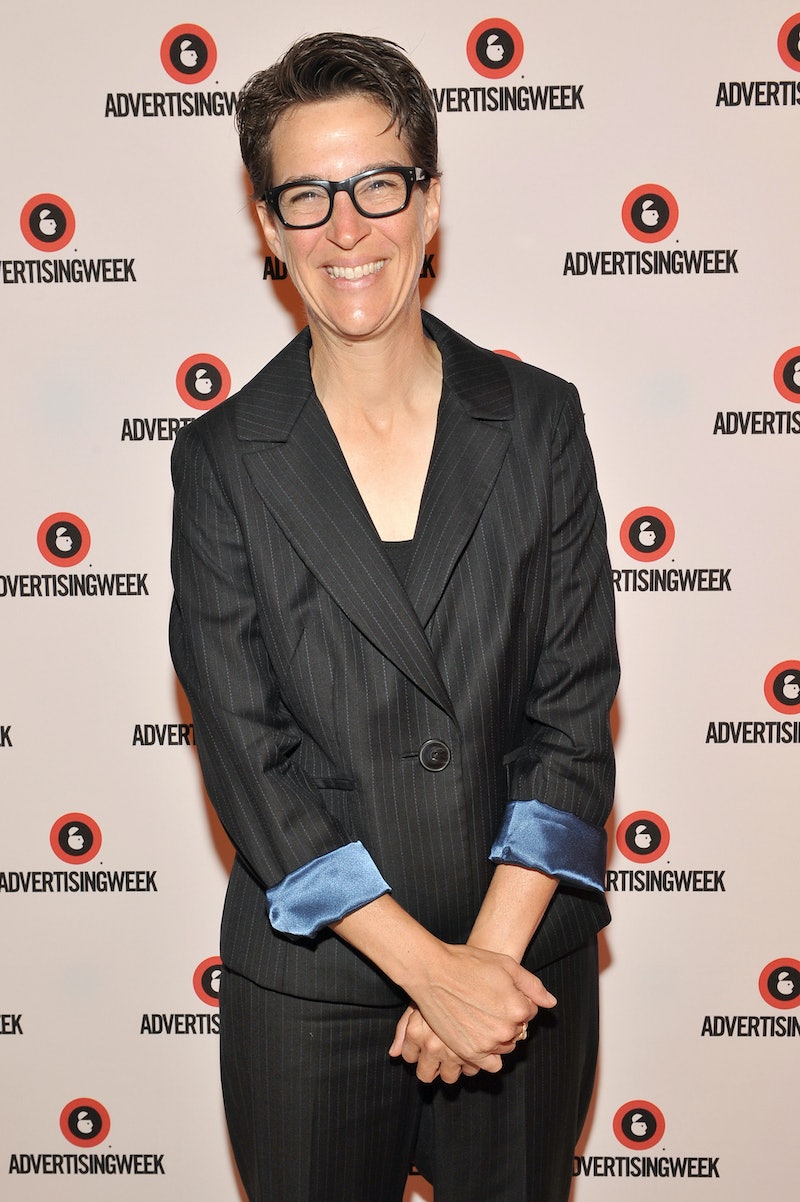 On Friday evening, the top three (and only remaining) Democratic candidates, Hillary Clinton, Bernie Sanders, and Martin O'Malley, will meet in South Carolina to discuss the issues with MSNBC's Rachel Maddow. The format of this conversations among the candidates will differ significantly from a debate, and with a pro like Maddow handling the questions, there are so many reasons you should watch the Democratic forum. The conversation with Maddow is not an officially sanctioned debate, and is being called the "First in the South Democratic Candidates Forum," and is being hosted at Winthrop University.

Leading up the the forum, Maddow spoke with a local radio station in Charlotte, South Carolina, WBT, to discuss what's on her mind as the forum approaches. Maddow said that she was a bit nervous and feeling the pressure, but thinks she's prepared to handle the candidates. She also stated that she wanted to prevent the candidates from being able to launch into their "stump speech" and offer talking points we've all heard before. So it sounds like Maddow is planning to push the candidates to dig deeper and talk about issues they haven't talked about as much so far. Maddow called the go-to talking points "useless" to the average voter, and said her greatest fear is that the forum will be boring.

Knowing that Maddow plans to keep things fresh, here are some other reasons we should tune in to MSNBC on Friday evening to watch the candidates hash out their plans.

It's Not A Debate

I know it's way too early in the election season to feel this way, but I'm already getting a little bit of debate fatigue. It's brutal to listen to the candidates yell back and forth for hours on end. But because this is a forum and not a debate, Maddow will be speaking to the candidates sequentially, not all at once. No rebuttals, no yelling (I hope), and probably a lot less interrupting. The change in pace will be really refreshing.

There Are Only Three Candidates Participating

Only Clinton, Sanders, and O'Malley will be at the forum, making it the smallest meeting of a single party's candidates for a primetime forum or debate so far this election cycle. The small group means more time for Maddow to speak with the individual candidates, and means that the candidates have less to hide behind (they can't hope one of the other candidates jumps in).

Maddow further told WBT that she planned to focus on the issues rather than the candidates' campaigns in order to give voters better insight in to what the candidates are most likely to actually do if elected. I think if any journalist can pull this off it would be Maddow, and if the forum goes according to her plans, we could learn a great deal more about the candidates than we already do.

There Isn't A Theme

Generally with presidential debates, the first of the series covers a wide range of topics and the subsequent debates will have a theme (the economy, foreign policy, etc.). Maddow has said that she plans to ask questions covering a broad swath of topics. This is going to be valuable for voters because it's a chance to hear the candidates answer tough questions in an in-depth manner that's really not possible in a fast-paced debate environment.

It's Happening In The South

Maddow stated in an interview with The Charlotte Observer that she plans to address the failure of the Democratic party to make meaningful progress with candidates in the South. Maddow stated that because the Democratic party is supposed to be a national party, the DNC candidates should have to answer to the ways they are lacking in southern states.

It's On A Friday