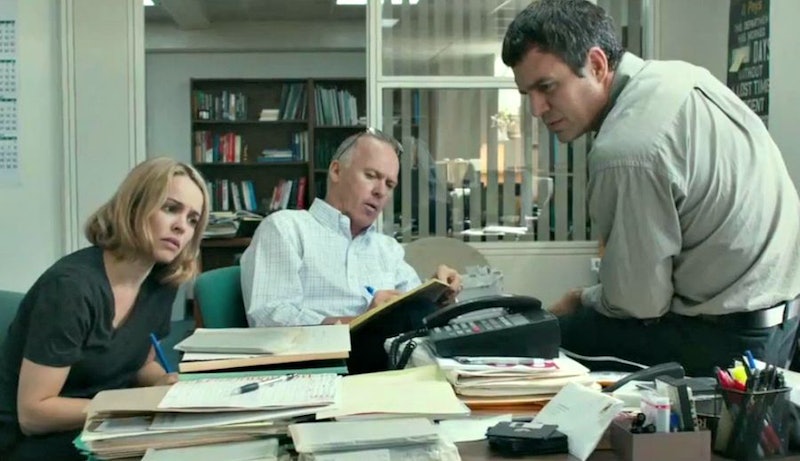 While some have presented Spotlight, the new movie about the Boston Globe's real life investigation into child abuse in the Catholic Church, as an ode to the lost field of journalism, watching it as an aspiring writer had an invigorating effect. While it's true that many of the methods it depicts are outdated, Spotlight joins a number of inspiring movies and shows about journalism that have and hopefully will continue to have a hopeful effect on future journalists.

The inspiring thing about these movies isn't the clacking of a typewriter or trips to the library. Instead, it's the dedication to truth, the idea that journalists can change the world through unearthing stories that have gone untold or ignored. In some ways, it's bittersweet to see the Spotlight journalists spend every day and multiple flights on a trip, when very few publications are willing to devote that kind of time and money to a story anymore. The movie's dogged protagonists show that lots of in-person work and original reporting, not just aggregation and Google, are required to break a story.

It's inspiring because it is real, invigorating, and politically important work, which is why many journalists get into the field, whatever media cynics want to say about it. In addition to Spotlight, which I highly recommend seeing, here are other movies to inspire young journalists, especially those who are sick of being told that theirs is a dead career path.

While certainly a flawed show, it's a great modern depiction of broadcast journalism with a strong dedication to truth and justice and a lot of chill-inducing newsroom scenes. Just listening to the intro makes me want to break a story.

One of the most likable movies of all time, this romantic comedy features Holly Hunter playing a character who is really great at her job and bad in her personal life. She is so competent and likable, and it's a great watch for aspiring news producers, especially for women.

While Gilmore Girls is not a show about journalism, Rory's journalistic ambitions and experiences at school papers are often central to the show. It's one of the only shows about going to school for journalism, and it's thus a great inspiration for younger students like Rory who want to make a difference and travel the world.

4. All The President's Men

This classic depiction of the Watergate scandal expertly highlights perhaps the most important moment of journalistic importance in US history. Woodward and Bernstein's thrilling investigation demonstrates how invigorating and pivotal journalism can be.

This is another depiction of the importance of journalism in the political world, this time showing the early days of broadcast news when CBS was threatened by McCarthy's anti-communist crusade. This excellent movie, made in black and white in 2005, has enough distance to understand and highlight the historical importance of their stance.

While suffering from '40s sexism, this excellent comedy depicts the fast-paced intelligence of the newsroom, and, while romance is the main focus, dedication to journalism beats love in the end.

Another old-fashioned journalism movie featuring Humphrey Bogart in the role he was born to play: a journalist hell bent on exposing mob crimes. Just listen to his impassioned speech that ends with the words "that's the press baby" and try to tell me journalism isn't cool.

This 1994 comedy starring Marisa Tomei and Ron Howard depicts a day in the life of a city newspaper, and it's a love letter to the fast-paced world of journalism.

With movies like Spotlight serving to remind us that journalism can save lives and take down institutions, it's important to remember that this "dying" field has changed the world in the past, and will continue to change the world in the future.