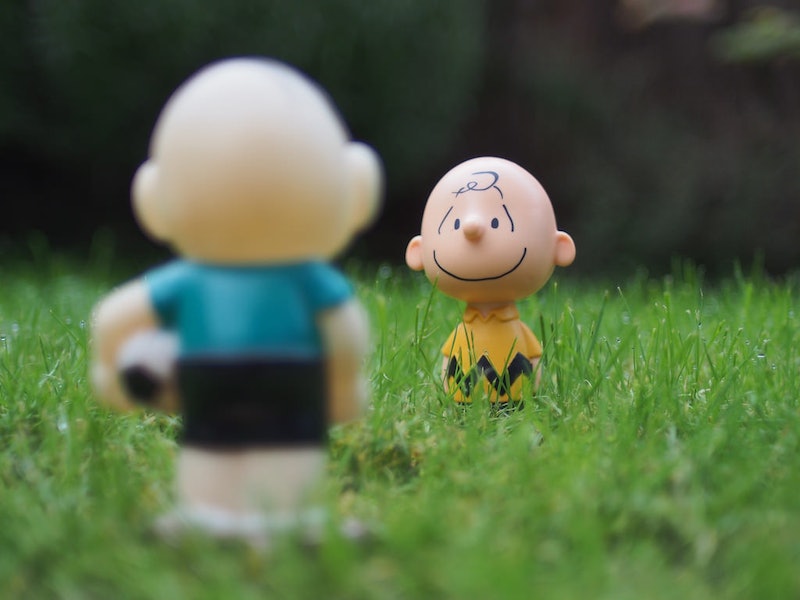 It has been 65 years since the first Peanuts comic strip, and we're all still in love with Charles M. Schultz's melancholy child characters. Even with The Peanuts Movie in theaters, you know you'll still tune in to A Charlie Brown Thanksgiving as part of your Turkey Day tradition. Charlie Brown, Snoopy, and the gang are so cemented in pop culture that they've become part of all our lives.

I mean, really, you can't say "Good grief" without conjuring up images of a tragically bald little boy in a chevron polo shirt. The names Linus and Lucy only bring to mind the Van Pelt siblings, and every hipster knows that he'll never be as hot as Joe Cool.

Like all good pop culture icons, the Peanuts gang have taught us some valuable life lessons since they arrived on the scene in 1950. The cartoon's contemplative style and dark humor give it a timeless appeal. In fact, it might be correct to say that, while kids enjoy Charlie Brown's mistake-ridden adventures, only adults can really appreciate and understand them.

So, for everyone who has grown up with Schultz's characters, here are the 15 most important life lessons Peanuts has taught us over the years.

How many times have you watched Charlie Brown try to kick that damn football? Someone — usually Lucy — always pulls it out from under him at the last second, and he knows it, but that doesn't erase his hope that today will be his day. Charlie Brown taught you how to really give it the old college try.

2. Even the Wise Need Security

Charlie Brown had his own personal sage in best friend Linus van Pelt. But Linus, for all his wisdom, needed to have his security blanket close at hand in order to bear the unbearable agony of social situations. Through Linus, Peanuts taught you that needing support doesn't discount your strength.

Linus' big sister Lucy was always my Peanuts hero. She was loud, ambitious, ridiculous, and really kind of mean. In spite of her faults, Lucy knew that she didn't owe anybody anything. When she set up shop as a psychiatrist, she didn't hand out free advice, because she knew the nickels her time was worth. Lucy van Pelt's self-confidence taught us all to value ourselves, even if it wasn't very polite.

Plainspoken characters like Marcie and Franklin abound in Peanuts, and they aren't always the most humor-minded of the bunch. Even though we'd like to think that humor is universal, Schultz's characters taught us that this is not the case. So it's OK if you don't get the funny your friends just made. They're hanging out with you because they like you, not because you're laughing at all of their jokes.

You don't get much more ponderous than Charlie Brown and Linus. Those two thought about big adult problems before they really even had big adult problems. Reading and watching their philosophical wonderings let you know that it was OK to think about the big stuff, even when it doesn't affect you.

6. ...But Don't Take Anything Too Seriously

While you were sorting out your personal philosophy, Peanuts reminded you to never take anything too seriously. After all, life is hard enough without taking every punch straight to the gut.

Charlie Brown's little sister, Sally, was the ultimate pragmatist. If she tried to summon sunshine and got rain instead, she'd celebrate the fact that her powers were too great to control. Pragmatism might not always be the logical choice of attitude, but Sally taught you just how well it could serve you.

Peanuts pianist Schroeder rarely speaks, preferring to practice his music instead. When he does talk, it's because he has something pretty damn important to say. Through Schroeder, Peanuts taught you that it's OK to be quiet when you don't feel like talking, and that no one should devalue your companionship just because you aren't a chatterbox.

9. Embrace the Power of Your Imagination

Snoopy has an enviable imagination. One minute he's a happy beagle, the next a tortured writer, and the next a WWI Flying Ace. He had his head in the clouds, and he made his own fun when he wanted to. Following Snoopy on his imaginary adventures made you hold on to your own sense of make-believe.

Charlie Brown and Snoopy have plenty of fun, but they're seldom happier than when they're just enjoying the weather and each other's company. Taking joy from the simple things is one of the most valuable life lessons you can ever learn, and Peanuts has been teaching it to you since childhood.

11. Your Secrets Are Yours to Keep

Almost every Peanuts character has a secret they keep close to the vest. Charlie Brown loves the Little Red-Haired Girl, Peppermint Patty loves Charlie Brown, and — because I ship them — Marcie loves Peppermint Patty. But they all, for one reason or another, opt not to reveal their interest. And that's OK, because everyone's secrets are her own to keep.

12. Be Yourself Every Day

I don't know how many alter-egos Snoopy has, mainly because I don't feel like counting them. Suffice it to say, he's got a lot. When Snoopy wakes up feeling like Joe Cool, he puts on his shades and sweater. When he feels like the Flying Ace, he dons his goggles and aviator cap. Snoopy taught you that being yourself doesn't always mean being consistent in your style, and that you should embrace your many selves instead of tying yourself down.

13. Don't Let Anyone Intimidate You

You've gotta hand it to Peppermint Patty. She knew she was just as good as anyone else, and no one could bring her down. Her confidence taught you to never let anyone intimidate you or dull your sparkle.

Lucy and Woodstock are probably the angriest Peanuts characters. Although they have totally different personalities, they both know how cathartic and influential a good yelling sesh could be. Through them, Peanuts taught you that your feelings are never invalid, even when they aren't polite.

Everyone in the Peanuts gang loves to dance, right? I mean, how many group dance scenes have you seen in their specials? Even if they didn't have the best moves, that didn't stop Schultz's characters from cutting a rug. So dance like no one's watching, and make your own happiness.

More like this
Jessica Simpson On The Time She Was Pursued By A Backstreet Boy & An *NSYNC Member
By The Editors
Here's How Netflix Should Adapt Prince Harry's Memoir Into A Movie
By Ginny Hogan
The Spice Girls Are Set To Reunite At King Charles III’s Coronation
By Sam Ramsden
Austin Butler Confirms Vanessa Hudgens Pushed Him To Do 'Elvis'
By Alyssa Lapid
Get Even More From Bustle — Sign Up For The Newsletter
From hair trends to relationship advice, our daily newsletter has everything you need to sound like a person who’s on TikTok, even if you aren’t.