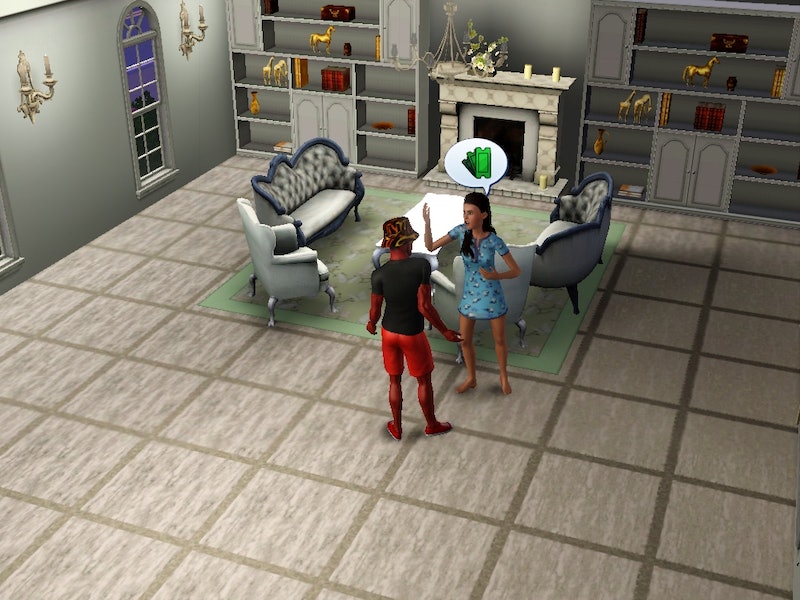 Are you still reeling from last week's The Sims Scream Queenstwist? I know I am. I thought Sim Chanel #2 was gone for good. But she was not gone for good. She is back and taking naps in empty bathtubs. So where has she been hiding out since Episode 1? Why did it take her so long to come back to the Sim Kappa Kappa Tau house? What's she been up to? What's the story? There's got to be a story, right?

Yes, there is a story. And yes, we're going to get into the story.

But Before We Dive Into The Tale Of Sim Chanel #2's Disappearance, I'd Like To Address Two Very Weird Things That Happened In The Sim Kappa Kappa House Stuff This Week

Um, why was there a roof on top of the Sim Chanel-O-Ween maze? Where did it come from? I most certainly did not put that roof there. Also? It was floating. So very strange.

I Deleted The Roof

See ya, wouldn't wanna be ya.

While Sim Zayday Enjoyed A Late Dinner, Sim Chanel #5 Floated Above The Kitchen

The Sim Red Devil haunted Sim Chanel #5's dreams. She didn't seem too bothered by it.

In Episode 1, the Sim Red Devil piddled all over the floor and Sim Chanel #2 tweeted about it.

They searched the bedroom far and wide for leads. They did not find any leads.

"I just changed into my pajamas," Sim Chanel #2 spat, "but I will go to the movie theater right now and prove that I'm right once and for all."

Sim Chanel #2 Made Good On Her Promise

It was the moment of truth: How much does a movie ticket cost?

One movie ticket is §40. Neither Sim Chanel #2 nor the Sim Red Devil were correct. Sim Chanel #2 was furious. She hates being wrong.

Sim Chanel #2 Thought Watching A Movie Might Calm Her Down

I mean, why not? She was already there.

After The Movie, Sim Chanel #2 Wasn't Ready To Go Home

She was too mad. She couldn't face the Sim Red Devil. So she stopped by a pool.

Sim Chanel #2 Went For A Swim

Hope the Sims living in those houses don't mind!

Where oh where did she go next?

The Cemetery, Of Course!

A movie, a swim, and a trip to a graveyard? Cue the Hoku because we have a perfect day on our hands.

Sim Chanel #2 Admired The Statue Of The Sim Grim Reaper

If I stare at this statue long enough,Sim Chanel #2 thought, maybe the actual Sim Grim Reaper will appear.

This is not an episode of The Sims Big Brother 17 , so no, the actual Sim Grim Reaper did not appear.

Sim Chanel #2 Wandered Around The Graves

Her stomach picked the next stop of the day: the local diner.

But Before She Left The Cemetery, Sim Chanel #2 Wanted To Explore The Mausoleum

Sim Chanel #2 Got A Job At The Mausoleum

"What a great day," she muttered to herself over a plate of French fries. "I don't think I'll ever go back to the Sim Kappa Kappa Tau house."

For The Next Week, Sim Chanel #2 Spent Her Days Working & Sleeping At The Graveyard

"Where have you been?" Sim Denise asked. "The other Sim Kappas are worried sick about you. We've been trying to figure out the story behind the pee puddle and the tweet for days! I can't wait to tell the Sim Kappas you're OK."

As Sim Denise reached for her cell phone, Sim Chanel #2 swatted the mobile device away.

"Um, it'll cost more than §40 to replace the phone you just broke."

Sim Denise shook her head and walked away. It was official: Sim Chanel #2's time hiding in the graveyard had come to an end.

She would sleep first, talk to her sorority sisters later.

Ugh, it smells like kitty litter and toilet water perfume in here, she thought.

Sim Chanel #2 Snuck Into A Bathroom, Climbed Into The Clawfoot Tub, & Fell Asleep

Last week, I thought Sim Chanel #2 was bathing in her PJs. I was wrong. She was actually snoozing in the empty tub. I guess that's less odd?

The Next Morning, Sim Chanel #2 Crept To Her Bedroom & Plopped Down In Front Of Her Laptop

While Sim Chanel #2 was in the middle of checking her email, Sim Grace walked in the room. Sim Grace freaked out. "SIM CHANEL #2!" Sim Grace yelled. "YOU'RE ALIVE! WHERE WERE YOU!"