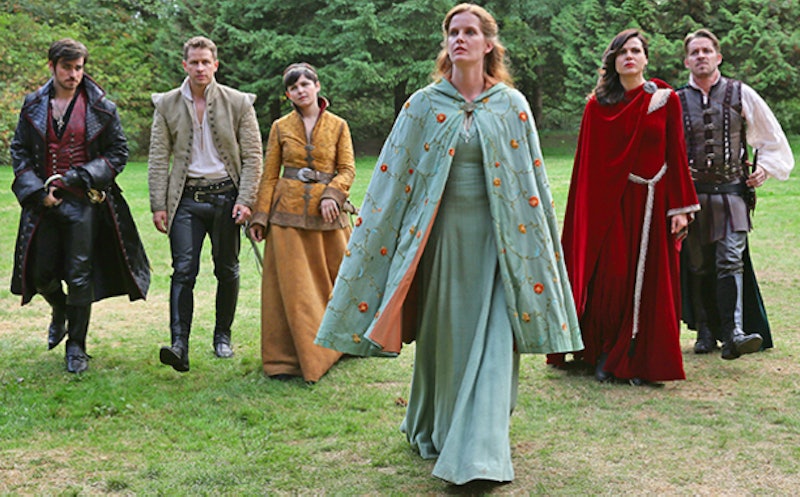 We're more than a half a dozen episodes into Once Upon A Time Season 5, and we're no better off in the battle of restoring the Dark Swan to her former Savior self than we were when we started — and in many ways, we're even worse off. It's hard to tell what's happening at any given time since we spend every episode living in the present and then hopping back to the missing six weeks in Camelot, a period which Emma has very conveniently erased from everyone's memories. This Sunday's episode, "Nimue", fills in another blank in that time, when Merlin convinces the group to steal Excalibur from Arthur so that he can re-forge it with the Dark One's dagger and hopefully rid Emma of the darkness for good. Unfortunately, they let Zelena "help" with the rescue mission. You can imagine how well that's going to go over.

Zelena is the Wicked Witch for a reason, and while Regina has managed to keep her sister in check thus far, nothing good can come of allowing her to join in on a magical quest. As Ginnifer Goodwin (Snow White) admitted to Entertainment Weekly, "We’re a bit naïve. Haven’t we been here before? The audience will be a half-step ahead of our gang in terms of what could befall them in teaming up with Zelena. Does anybody really think that’s a good idea?" (No, I'm pretty sure they don't.)

Of course, there'll be a very good reason Zelena is brought along — she's an extremely powerful witch whose magic could very well come in handy. After all, it was Zelena's magic that allowed her to handle the wand that opened the portal to Camelot in the first place. However, using her magic also means allowing her to wield it, and I think we're all aware of how potentially disastrous that will be. It's far too early to give Zelena a chance to be a hero — and frankly, that time may never come.

Frankly, I'm a bit torn on Zelena. Rebecca Mader is so delightfully insane, and the energy she brings to the role of Zelena is contagious. Your eyes are drawn to her every time she's on screen, and her interactions with the other characters are always a joy to behold, which seems dramatic but is totally true. But Once has a choice: to let her be the villain she was born to embody so perfectly and know she'll soon be lost (because good always wins on this show), or to give her a redemption arc and rob her of the spark that makes her so great to watch. Frankly, I'm not sure which is worse.

Thankfully, Mader was promoted to series regular for Season 5, meaning it's likely we'll get to explore her storyline a bit more and perhaps see some story development, for better or worse. While I'd love to see her find a bit of peace and common ground with Regina, they'll never be particularly close, and that's fine, because nothing would make Zelena more boring than the loss of her witty and sometimes rather cutting commentary. However, the writers have a real opportunity to use her to her maximum potential, and doing that likely means she's going to have to raise some serious hell, even if she's stopped in the end.

Frankly, while I believe Zelena does have a heart somewhere in there, now's not really the time to test that out. Her betrayals are too fresh and her state of mind too volatile to expect anything but trouble from even the slightest amount of trust sent her way, but maybe that's the fun part. I guess we'll just have to wait and see.