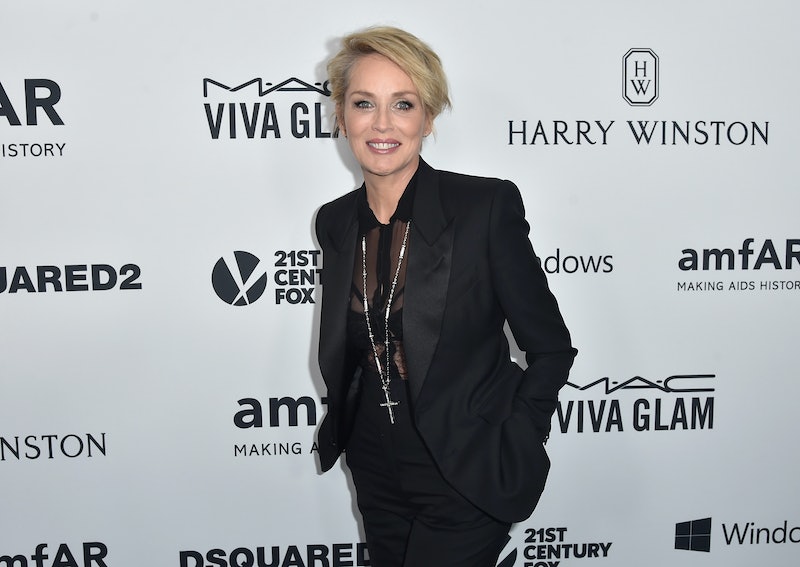 Sharon Stone is pretty much an industry stalwart at this point, with a Hollywood career spanning 35 years and more than 80 films and TV series on her resume. She's an incredibly talented actress whose name is known around the world... but that doesn't mean she's paid as much as male actors in a similar position. We're all aware of the Hollywood wage gap at this point — an issue Jennifer Lawrence eloquently discussed in an open letter in Lena Dunham's Lenny newsletter last month — and according to her claims, it seems that Stone has been getting a lower paycheck than her male counterparts for most of her career, dating all the way back to the early '90s.

In an interview with People at the FUNKSHION "Celebration of Hope" fashion event held in Miami on Friday, Stone claimed that even a successful film didn't guarantee that she would receive as much money as men in the industry, as she discovered following her breakout role in 1992's Basic Instinct. "After Basic Instinct, no one wanted to pay me. I remember sitting in my kitchen with my manager and just crying and saying I'm not going to work until I get paid. I still got paid so much less than any men," Stone said.

While this is disappointing to hear, it's not at all surprising. Stone is only adding her voice to the chorus of female actors who have spoken out about the misogyny they've faced in Hollywood, and surely there will be more after her. And while it's going to take a long time before things are on even ground for both men and women, Stone doesn't want us to forget non-celebrities, either. After all, the wage gap is even more evident in day-to-day life, where the latest statistics still show that women only make 78 cents on every dollar that a man makes.

"[Wage equality] has to start with regular pay, not just for movie stars, but regular pay for the regular woman in the regular job," Stone said. "More than 50% of marriages end in divorce and the women are working and taking care of their kids and that's how it goes and you have to say 'Yes' because you have to feed your children. It's a sort of economic blackmail."

It's good to hear Stone echo the concerns of so many working women in the "real world," because while celebrities are still people that deserve basic human rights of equality, they're still making millions upon millions of dollars. Meanwhile, those of us working 9-to-5 jobs (or several) to make ends meet completely understand the struggle and know just how much a difference that extra 22 cents on the dollar would mean to our paychecks and our lives overall.