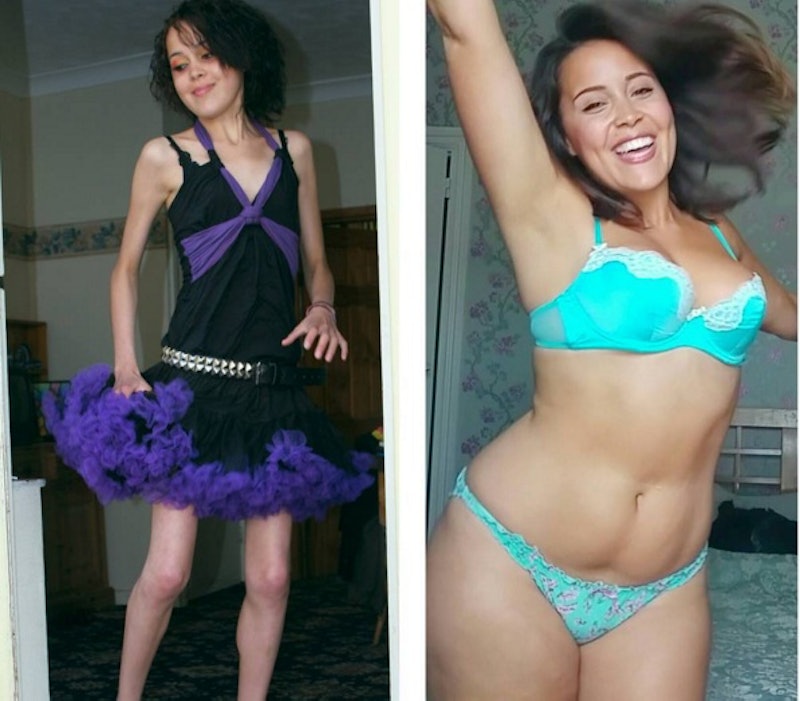 Self-proclaimed "average 22-year-old, taking a stand against a world that profits from teaching us to hate ourselves," blogger Megan Jayne was diagnosed with anorexia at 14 years old, hitting an all-time low weight of 65 pounds. Almost a decade later, she's fully recovered and has made it her mission to spread body positivity to help other young women (and men!) not go through what she experienced.

According to Jayne's blog PodiPosiPanda, it took her two years to claw her way out of the eating disorder. But that was after one hospitalization, one institutionalization, and a lot of heartbreak. When actively trying to recover, she tripled her body weight in a year, but couldn't get over her discomfort with a newly chubby body. As she wrote on her About page, she spent years feeling disgusted with what she knew was a healthier form and cycled through "crash diets and binge eating, losing and gaining hundreds of pounds in total over the next five years."

So how did she stop the cycle? According to People, "Jayne says it took stumbling across women on Instagram in 'every shape and size unapologetically loving themselves' to shake her from her obsession over being thin."

Today, she's following in the footsteps of these activists to inspire that same kind of self-love in others. Jayne has started her body acceptance blog BodyPosiPanda, chronicling her struggle and her journey to body positivity, as well as an Instagram account that is now 91,000 followers deep.

Her message is simple, but incredibly healing. In a post on her website, she wrote to her readers:

In the body image game, we’ve been set up to lose from the start. How many of us can remember the first time we saw an impossibly beautiful magazine body, and compared it to our own? How many of us can remember the first cruel comment, the first torturous diet, the first night spent gazing desperately into the mirror and picking ourselves to pieces? I want you to know that you’re not alone in your body image struggles, and you’re also not to blame.

She went on to explain, "I see belly rolls, I see cellulite, I see a million flaws that have previously sent me spiraling into self hatred. But this time, I also see happiness. I see beauty, beyond the one dimensional photoshopped form we’re taught to aspire to. I see worth, that extends far past the physical."

And that's a beautiful message.

To keep the inspiration going, below are five times Megan Jayne inspired some major body positivity.

1. When She Told Us To Start Today

Jayne shared a photo from when she was at one of her thinnest weights, compared to a photo in which she is healthy and happy. In her caption, she explained how it felt to be plagued with body hate. She reflected over how you can never truly live in the moment because you're "too consumed by the ever present mirror forcing your reflection to the forefront of your thoughts."

Jayne reminds us that we are all strong enough to smash that mirror away and never let it touch our self esteem again... and that day might as well be today.

2. When She Told Us To Stop Segregating Between Thin & Fat

In this Instagram post, Jayne spoke about her friendship with Christine Cho. When they first met, Cho said she never thought she'd have so much in common with a skinny girl. To this, Jayne stresses that instead of drawing lines in the sand between each other, we should remember that we're all in this together.

In her caption, she wrote, "Next time you judge someone's body type, envying their figure or making assumptions about their life, remember all the pressures and the struggles you share. Imagine how many beautiful friendships you could make, just from knowing that you're not alone."

3. When She Celebrated The Word "Unflattering"

Jayne posted a photo of herself in full makeup and striking a skinny-inducing pose (tummy stretched, thighs bent), and one right next to it in which she is bare-faced with her hair swept up and her tummy rolls out. The purpose of the side by side comparison? To celebrate the word "unflattering."

4. When She Reminded Us That Our Bodies Allow Us To Live

So many individuals suffer over this idea that someone will see their chubby thighs or their wobbly arms and judge them for it. But Jayne reminds us that 1. Realistically, no one is even going to notice it and 2. If they do, you don't exist for their viewing pleasure.

She wrote in her caption, "Know that you don't have to hide away. Nobody else has noticed that body part that you spent hours agonizing over in front of your mirror this morning. And even if they did — know that you don't exist for the viewing pleasure of others. Your body is not an ornament to be looked at, it is a tool that lets you live."

5. When She Called Out Oprah Magazine For Being Body Negative

The stuff we consume can leave a permanent imprint on our brains, and after seeing the same images over and over, we begin to think that anything outside of them is "wrong." That is why Jayne called out O for writing body-negative advice when it comes to wearing crop tops.

In her caption, she wrote, "Dear @oprahmagazine, Somewhere in the world there is a young girl. She is full of light, full of potential, she is not yet torn down by the world. She likes to read her mother's magazines and imagine how glamorous womanhood will be. Flicking through the pages she regularly finds adverts for diet pills and cosmetic surgery, and with each flick it trickles into her consciousness that women should only look one way."