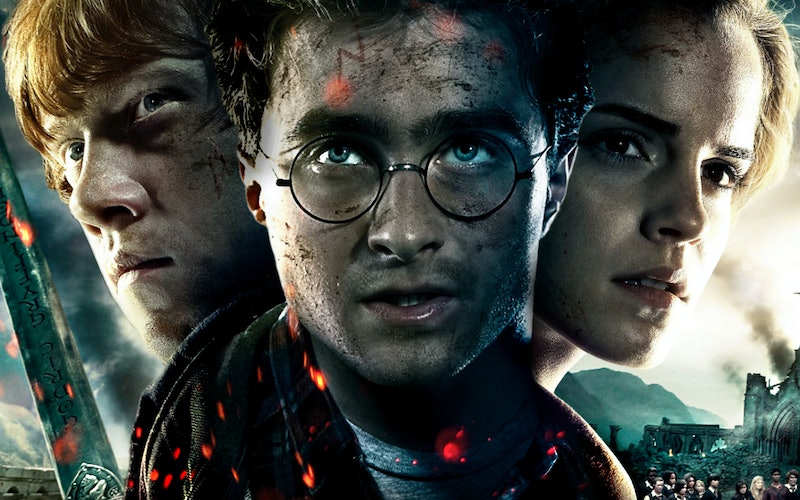 If you're as obsessed with Harry Potter as I am, then you probably love both the books and the movies almost as entirely separate entities. Of course the big screen adaptations can't possibly capture every single nuance and minor occurrence as the books, but they still have their own charm and are amazing to watch over and over again. One of the best times to pop in a Harry Potter movie has got to be the holidays. There's something about pretty much every one of the eight movies that has a Christmas movie feel to it, even if they're not officially made for December viewing. Don't believe me? I'll prove it.

The wizarding world of Harry Potter is, of course, about magic at the center of it all. What time of year better encapsulates the feeling of magic, wonder, and excitement than Christmas? None, sorry. But beyond just the general ambiance of the movies, there's also the fact that a couple of the films actually feature a few Christmas scenes, so the connection isn't all that tenuous to make. Sure, you can enjoy a Harry Potter movie any time of year (and believe me, I do), but adding them to your Christmas roster will greatly improve the season, I'd say.

Hogwarts Looks Amazing In The Snow

I mean, come on — you just can't argue with that. Wouldn't you love to stomp around the Hogwarts grounds in the winter and take a trip to Hogsmeade for a nice mug of butterbeer? I can almost taste it now!

Harry & Ron Want You To Celebrate

Remember Harry's first Christmas at Hogwarts, which was probably his only good Christmas in his entire life, since he grew up with the awful Dursleys? It was so sweet and touching and immediately puts me in the holiday spirit.

Look At This Amazing Christmas Tree!

It's downright magical, both literally and figuratively. Ugh, I just want to start singing carols now from looking at it.

Don't You Just Want To Spend Christmas At The Burrow?

You don't have to lie or worry that your own family might be offended. The Weasleys are wonderful and the Burrow just looks so cosy (oh, and that turkey on the table looks good). Think they'll set me an extra place at the table? (Yes, I know the Burrow was eventually destroyed, but I'm sticking to happier times.)

Wouldn't You Love It If Hagrid Got Your Christmas Tree?

I know I would. Of course, a tree that big would never fit in my apartment, but I'm sure he could locate something that would and set it up for me.

I'll take one in XL, please! Sure, they look scratchy and aren't necessarily the epitome of fashion, but they're made with love and I'm a sucker for a good monogram, so why not?

Even Harry Potter Knows That Sometimes Christmas Is A Downer

But it's also a happy occasion, as well. You can mourn loss while still celebrating what you have now, and Harry, Hermione, and Ron knew that better than anyone else. Sorry for taking the tone down, but we all know that sometimes Christmas is bittersweet.

The Great Hall Looks So Festive!

I'm so jealous that I'm not a witch and can't make magical snowfall come down in my living room. Christmas (and life in general) would be so much better.

Do You Really Need A Reason?

Harry Potter is perfect for year-round, as I said, but the series is clearly suited for Christmas most of all. So what are you waiting for? Pop in the DVDs now and get in the festive spirit!

More like this
At 14, Jenny Han Wrote Rom-Coms About Her Friends & Fan Mail To Leo DiCaprio
By Alyssa Lapid
Everything You Need To Know About The 'Knives Out' Sequel
By Grace Wehniainen
The 'Hocus Pocus' Sequel Finally Has A Release Date & It Makes Total Sense
By Shannon Barbour and Radhika Menon
Everything To Know About 'The Hunger Games' Prequel Movie
By Grace Wehniainen and Radhika Menon
Get Even More From Bustle — Sign Up For The Newsletter