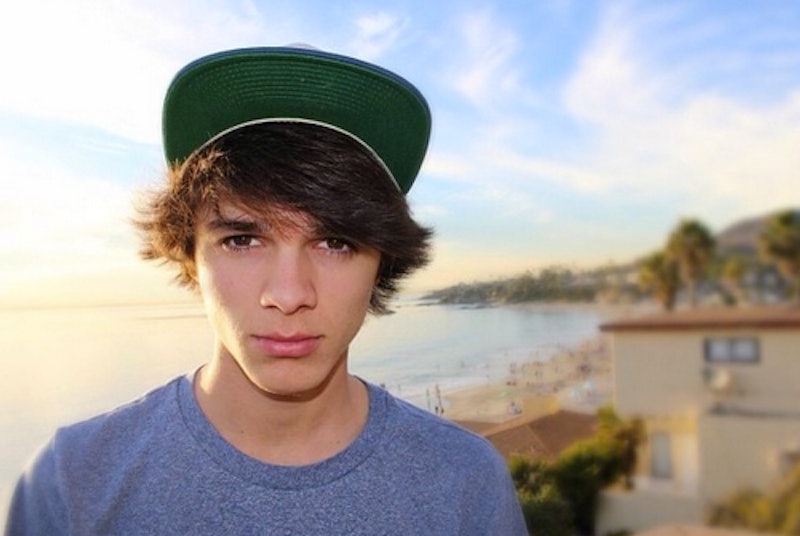 If you know who Brent Rivera is, chances are you're not even reading this and are instead dreamily staring at the photo above. For everyone else, Brent is a very famous, 16-year-old non-celebrity. What exactly does that mean? That this photo has over 127,000 likes on Instagram, a common occurrence for the Los Angeles teen, even though he's never been featured in a movie or TV show, or covered by any non-social media.

So in honor of today being Brent's birthday, we present him with his first piece of media coverage and he more than deserves it. Brent has more Twitter followers than Zack and Jessie from Saved by the Bell combined, two characters he's probably never heard of because again, he's only 16.

Unlike those child stars, or most of the celebrities you're aware of, Brent's fame comes entirely from social media, especially Vine. On the video-sharing site, Brent has over 2 million followers, his biggest audience, but also boasts over one million followers on Instagram, over 260,000 on Twitter and over 130,000 YouTube subscribers.

What's his secret? The videos? The hair? It's hard to pinpoint just what about Brent his fans love, but it's clear that they really, really love him. Virtually every time he posts something on one of his social media accounts, it gets thousands of likes or favorites. Look at this tweet from last night as an example.

Yes, you read that right, over 2,000 favorites and 400 RTs of "goodnight" and a non-emoji smiley face. Kim Kardashian, who has over 18 million Twitter followers, tweeted "good morning" with a link to an Instagram of herself and got 687 favorites.

So not only does Brent have a lot of fans, but they're all very active online and are constantly trying to engage with him. If you thought his basic "goodnight" tweet got a big response, wait until you see what happens when he posts something with a little more significance. Here's Brent with fellow young Vine star Cameron Dallas.

Almost 10,000 favorites. And this is just Twitter, not even his most popular platform. Most of his fans come from his Vine and YouTube videos, so there must be something about them bringing all of these viewers. Here's Brent's most watched YouTube video, with over 170,000 views.

It's a cute, funny little video of five relatable things that probably make his fans mad, too. His channel has a lot of similar content; Brent making observations, sharing what he's up to, and doing sketch-like material. But if you're impressed by his Twitter and YouTube popularity, let's get to where the real numbers are: Vine.

It's safe to say that Brent is more popular than any of us could ever hope to be. Now the only question is whether he can turn his online fame into something profitable in the real world — that is, if he wants to. Brent gets the kind of immediate feedback and tangible proof of popularity that most celebrities could only dream of, yet his name is barely known outside of his fan base.

Right now Brent is a 16-year-old kid with great video-editing skills and a knack for knowing what people want to see, but if he keeps going at his current rate, he might have his on TV show within a year.