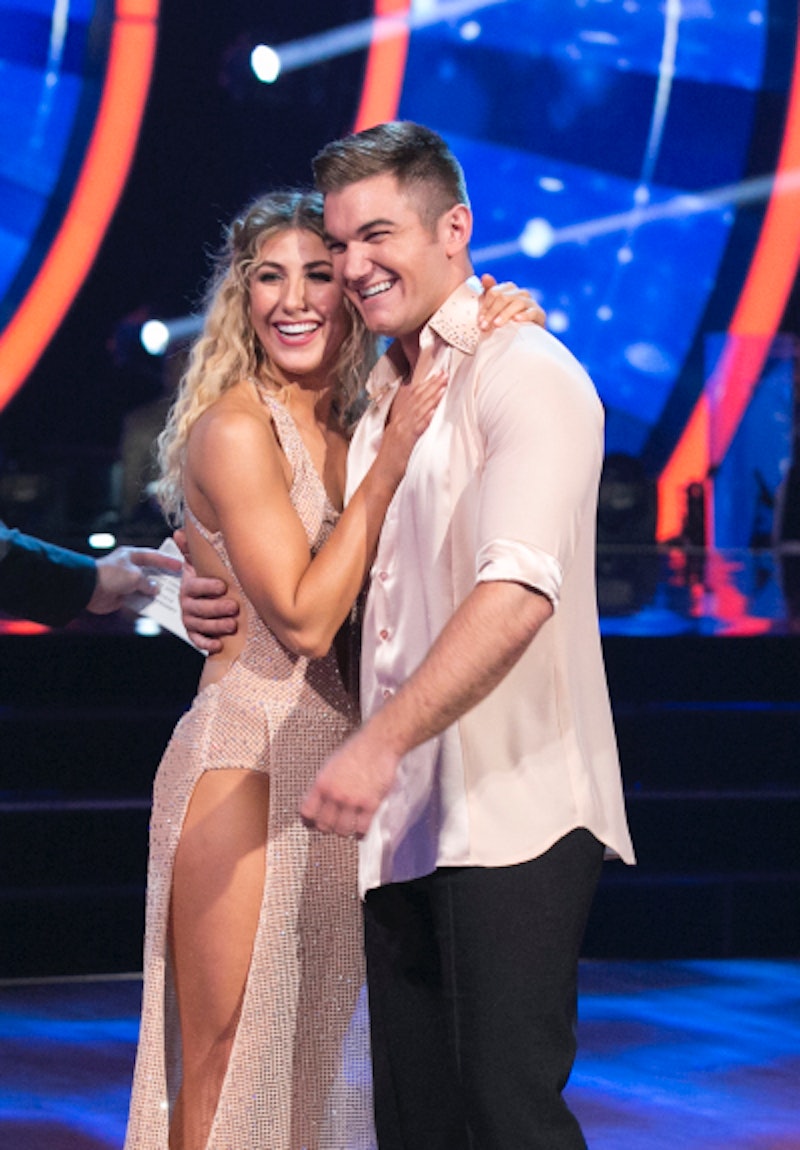 Alek Skarlatos and Lindsay Arnold steam up our screens every week on Dancing With The Stars. But, Lindsay is happily married, so it’s been a plot point on Dancing With The Stars this season that Alek is single and super ready to mingle. Enter pro dancer Emma Slater, who was partnered with Hayes Grier until he was eliminated in week seven. Emma and Alek would make the cutest DWTS couple ever. They should date and get married and have a brood of adorable Dancing With The Stars babies, don’t you think? I sure do.

In an interview with Bustle, Lindsay Arnold gave us the inside scoop on the flirtation between Emma and Alek, saying, “Alek and Emma had a little bit of chemistry when they were partners, but unfortunately for Alek, Emma is not available, and that really bummed him out because he had some feelings for her!” Oh, no! Say it ain’t so! Lindsay also said how shy Alek was, and that he’s “not used to having this many beautiful women around him.” While that’s quite the problem to have, I’m still really pushing for Alek and Emma to get together. Here’s a list of reasons why they’d be the cutest Dancing With The Stars Couple.

Alek Is Tongue-Tied Around Emma

Alek and Emma were partnered together during the switch-up week, and Alek literally did not know what to say to Emma. It was so adorable how he was so silent around her — like her hotness (as he puts it) was impeding his speech. Cat got your tongue, Alek? In the interview before their dance, Alek said, “Focusing while we’re dancing is a little difficult.” A little? He couldn’t even form words! It’s so cute how completely enamored with Emma Alek is.

Of course, love isn’t all butterflies and rainbows. There are plenty of times where your partner is really going to piss you off, and you have to look the other way or you have to take the time to forgive. During rehearsals for their Dancing With The Stars rumba, Emma’s misplaced elbow whacked Alek in the face, breaking his nose in the process. It would be easy to get angry, but Alek just stuck some tissues up his nostrils and continued on with rehearsal. Now that’s some sort of crush, ain’t it?

Alek & Emma Are So Comfortable With Each Other

Tongues wagged when Emma and Alek performed their very sexy rumba, but let’s discuss why they were able to get so sensual. Emma said in that week’s pre-dance interview that she had never gotten that close to someone who wasn’t a dancer or her boyfriend. Why? Because she and Alek are just super comfortable with each other, and you can tell. That sort of intimacy can’t be taught — it just is or it isn’t. Even though Alek and Emma aren’t even a couple, they make it look easy.

Lindsay may have said that Emma wasn’t “available,” but I think she should get available and fast. Though they may not be partnered up on Dancing With The Stars, Alek and Emma should be partnered up in real life–pronto.