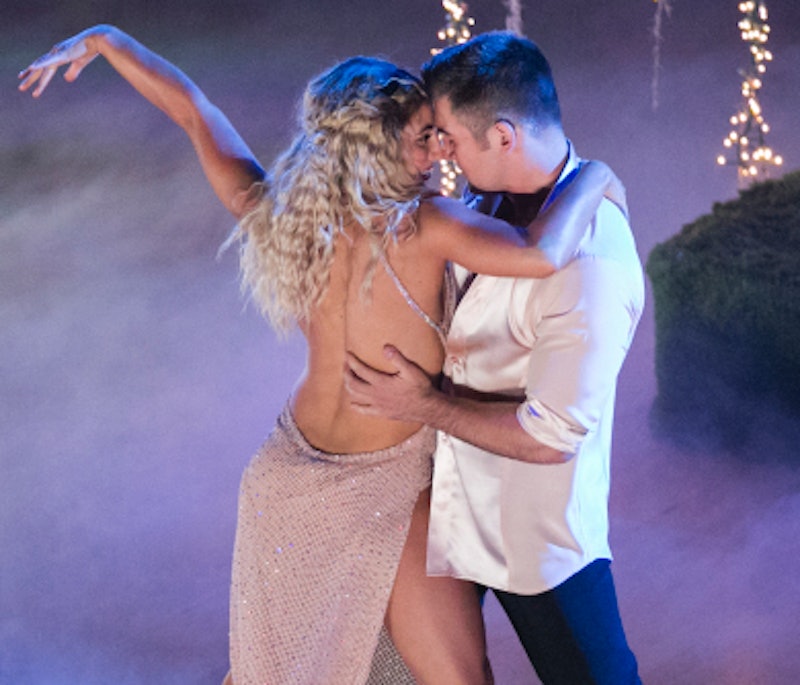 Although he may not be as recognizable as the other Dancing With The Stars competitors, Alek Skarlatos has quickly become one of the most electrifying members of this season's DWTS cast. Thanks to good technique and a lot of heart, he and his dance partner Lindsay Arnold continue to impress week after week. Skarlatos may already be an international hero with dance chops to boot, but there's one thing he doesn't have that he absolutely should: A girlfriend. Not that he needs one, but he's definitely adorable and nice enough to have his pick of ladies. However, there is one dancer on DWTS that fans think would pair well with, and they're all crying out that Alek and Emma Slater should date.

Skarlatos gets along awful well with his dance partner Lindsay Arnold, but she's already in a fairy tale relationship with her husband. Skarlatos would be a good catch for any woman, but if his rumba with Slater during Switch-Up Week was any indication, then he clearly has some vibrant chemistry going on with the 26-year-old English dancer. There's plenty of evidence that these two might be as crazy about each other as we are about them.

1. They Had Instant Chemistry

Slater said of him to People magazine: "From the first day of rehearsal, we were really comfortable with each other. Some people just have that energy that you can have a laugh with straight away and just do normal stuff with." It's not exactly love at first sight, but it's something like it.

2. They Have Forgiven Each Other For Causing Injury

These two showed undeniable chemistry during their dance together, which got so frantic in rehearsal that Skarlatos ended up with a broken nose. Despite the injury, they were able to progress in each other's good graces. They're not even dating, and they've shown strength together through hardship.

3. She Surprised Him For His Birthday

For Alek's 23rd birthday, Emma surprised him with an Oreo-topped birthday cake. This sweet gesture apparently confused Alek whose facial expression seems to be confused at how Oreos work. However, that doesn't make the gesture any less sweet.

4. They Went To Oregon Together

In preparation for Switch-Up Week, Alek took Emma to his home state of Oregon. This was not required by the show and appeared to be entirely voluntary on their parts. Any two people that can stand to go hiking in the forest with each other clearly have a deep and positive connection.

5. They Already Have A Couple Name

Rarely does the "couple name" precede the coupling of the two respective parties, but Alek and Emma wasted no time determining that "Alma" was the best way to address the two of them as a pair.

These two are so compatible, that if you simply put a kid in between them they suddenly look like the coolest parents on your block.

These two may have only spent a week together for the show, but hopefully that was a trial run, and these two will upgrade to a "full subscription" once this season of DWTS has ended.