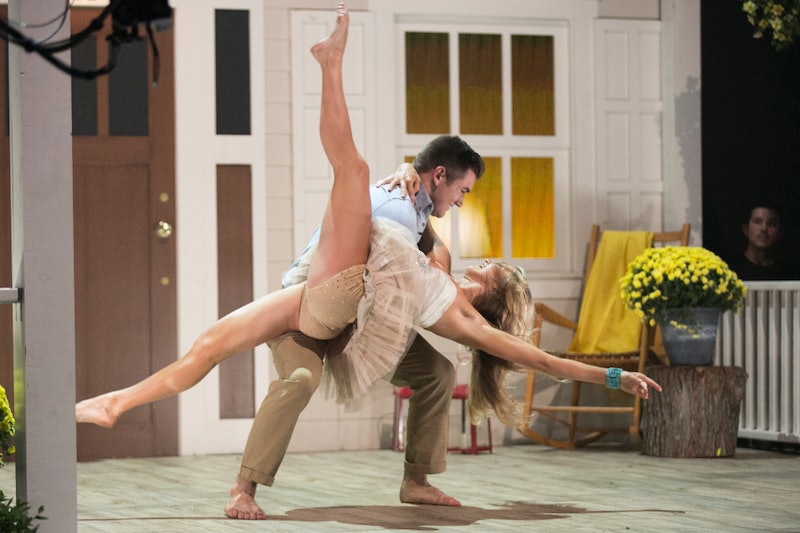 Getting injured is rare, but not wholly unexpected on Dancing With The Stars. Kim Zolciak suffered a mini stroke and had to bow out of this season. Hines Ward almost broke Kym Johnson’s neck on their season. Nastia Liukin hurt her foot, and Melissa Rycroft cracked a rib. When you’re dancing so hard and for so many hours a day, things happen. This time around, Alek Skarlatos was on the unfortunate side of things with his new partner, Emma Slater. During their practice session of a very sultry rumba (and I mean sultry), Emma’s elbow connected with Alek’s nose, and… blood. Just blood. She broke the poor guy’s nose!

Granted, Emma felt very, very bad, but at least she didn’t almost break his neck (since that’s happened before). Luckily for the team, Alek recovered in time for show time, and Emma and Alek seriously rocked their dance. Doing a rumba to James Bay’s “Let It Go,” Emma and Alek connected in a way that was palpable. Like, seriously, these two were electric, to the point where Erin Andrews had to ask in the post-dance interview if anything was going on there. Wasn’t Alek just asking out Lindsay Arnold or something last week? Emma and Alek shrugged it off, but come on, guys — inquiring minds love to gossip about Dancing With The Stars rumored couples!

As with a few other dance couples tonight, you could really tell that Alek and Emma were learning from each other, which is totally the point of this partner-switch exercise. It’s designed to shake things up and bit and push the dancers out of their comfort zone, and in the case of Alek and Emma, even with a broken nose, he showed a whole new side of himself. As Maks told Alek during judging, Alek is the dark horse of this season of Dancing With The Stars, and it’s his contest to lose.