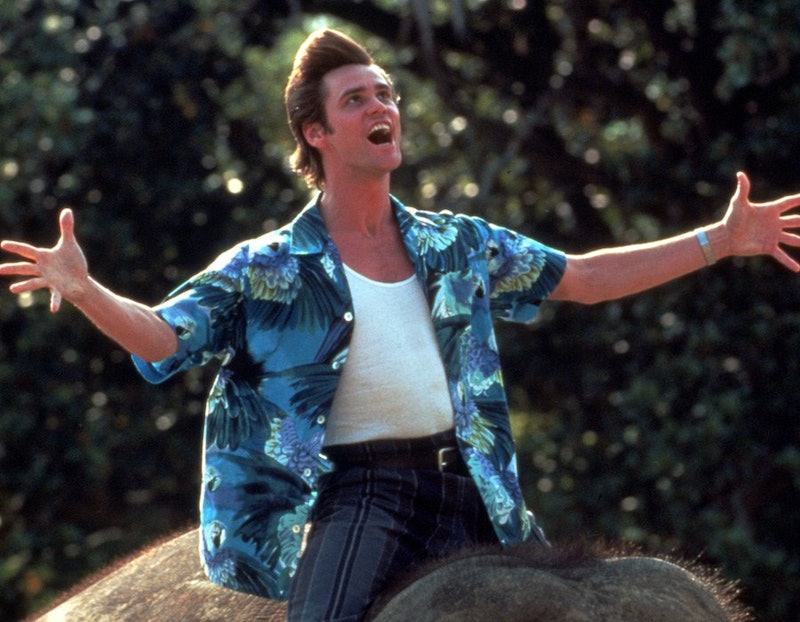 Ace Ventura: Pet Detective set the world on fire when it came out in 1994. The tale of an eccentric pet-focused private investigator who has to rescue the Miami Dolphins’ mascot, Snowflake, the movie was a mega hit, just like Jim Carrey’s other movie that year, The Mask, and what happens with mega-hit movies? A sequel is made as soon as possible. That brings us to Ace Ventura: When Nature Calls, which was also a hit, mostly because Jim Carrey was a bonafied movie star by the time it came out. I watched it more than a few times as a kid, and boy is Ace Ventura: When Nature Calls a different movie as a grownup. Ace Ventura: When Nature Calls follows Ventura’s next big adventure, which is to find a sacred emblem of a special African tribe. This emblem is a white bat, which happens to be prized by poachers and hunters and has almost been hunted to extinction. You dig? Obviously, there are plenty of jokes, caricatures, and crazy faces by Carrey along the way.

Now, let it be known, I’m not a giant Jim Carrey fan to begin with. I may be a slightly humorless adult (I’m not really one for gross-out humor), and I was definitely a slightly humorless child. Just mature for my age, you dig? Or just really boring. Anyway, I hated that “being-birthed-from-the-rhino” scene when I was 10 years old, and I certainly hated it when I saw it again as an almost-30-year-old. I guess the birth of a man from an animatronic mammal never really struck my fancy. Here’s what else I noticed watching Ace Ventura: When Nature Calls as an adult.

Isn’t that the thing about movies you liked when you were younger? You watch them again as an adult and see that they were actually pretty filthy (Grease, Clueless, etc.). Ace Ventura: When Nature Calls fits this bill. It includes rape by gorilla (like seriously), the devirginization of a native girl, rendering her tainted in her marriage, and plenty of other non-laugh-a-minute items. I get that children’s (this is sort of a kid’s movie, right?) films have to appeal to the grownups who are paying for the tickets, but I felt like most of the sexual jokes came from an ugly place. Like Ace ruins the native girl’s life because he slept with her? Shmeh. It all could have been so much smarter in my opinion.

2. The Natives Are Treated Poorly

The whole premise of the movie is that Ace has to figure out what happened to a very special bat that this African tribe reveres as a sacred beast. It’s been taken away from the tribe, and it’s about to incite a war. While that doesn’t sound so mean or callous in theory, the African tribesmen are constantly the butt of the jokes, bordering on insult. Even though the black tribesmen are the majority party of the movie, they’re constantly looked on as the “other.” The first Ace Ventura film had a lot of poking fun at other people, but there, it felt lighter and kinder. Here, it feels mean, and I really didn’t like it.

Where is the screenplay for this movie? I love a good comedy myself, and I’m even down with those joke-a-minute laugh fests, but most of them have a plot line — if even a loose one — to keep the story going. Ace Ventura: When Nature Calls is basically a series of vignettes of Ace making faces and being ejected from animatronic rhinoceroses.

While I know that I’ve grown older and my tastes have changed, I was shocked in just how much I disliked this movie in watching it as an adult. I suppose Ace Ventura: When Nature Calls will not be a comfort food movie for a rainy day.