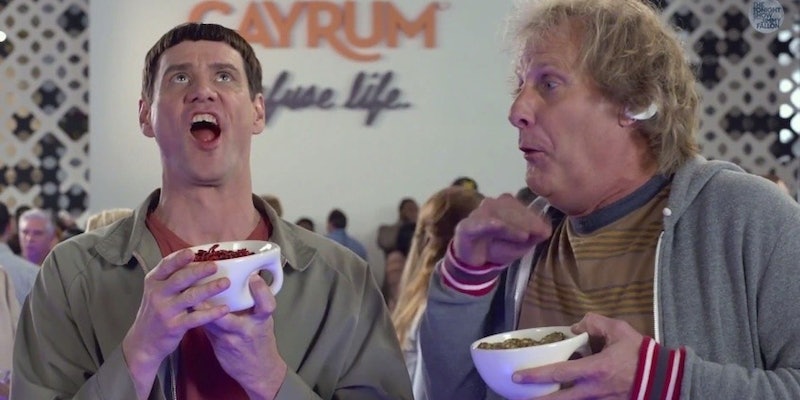 I’m not talking about this weekend’s new release Dumb & Dumber To , or the highly successful Ace Ventura: When Nature Calls, to date the only sequels that Carrey himself has starred in. I’m talking about the ill-conceived Eric Christian Olsen-headlined prequel Dumb and Dumberer: When Harry Met Lloyd, and the direct-to-TV PG movie Ace Ventura, Jr.: Pet Detective (sometimes called Ace Ventura: Pet Detective Jr., oddly), and the Jamie Kennedy vehicle Son of the Mask, and — the one you’ll probably remember best — the Steve Carell flick Evan Almighty. Four desperate grabs at that old Carrey magic (and four incredible failures).

In this day and age, it’s hardly a rarity for an unnecessary sequel to spawn from a blockbuster hit. This year alone, we’ve seen 300: Rise of an Empire, Muppets Most Wanted, How to Train Your Dragon 2, The Purge: Anarchy, Planes: Fire and Rescue, The Expendables 3, Sin City: A Dame to Kill for, and have Horrible Bosses 2 and Night at the Museum: Secret of the Tomb on the way.

You’ll notice I left off Captain America: The Winter Soldier, The Trip to Italy, and Dolphin Tale 2 — my rationale: Captain America was plotted from the beginning as a franchise starter, The Trip to Italy adequately and necessarily expands upon the themes introduced in its predecessor, and Dolphin Tale 2 addresses the continuation of the real life story pioneered in its forerunner. They might not each be qualitative masterpieces, but the mentality behind their development seems to warrant separation from the rest of the lot.) In instances like 300: Rise of an Empire and The Purge: Anarchy, we do see a new ensemble ushered in, usurping the positions of original stars. But the difference between 300/The Purge and any Jim Carrey comedy is the weight borne by the star.

Sure, 300 can be credited as the movie that familiarized the world with Gerard Butler. But in earnest, the film doesn’t belong to him. It belongs to Zack Snyder, the director, whose visuals and action set pieces are the true main character of the movie. In Ace Ventura and The Mask, nothing exists outside of Jim Carrey. In Dumb & Dumber, the plot and supporting cast are little more than a sounding board for the buffoonery of Carrey and Jeff Daniels. And Bruce Almighty, though a less memorable venture, is really just another platform for his ever-watchable silliness. Taking that all-important facet out of the equation would rob you of the movie altogether.

And yet it just keeps happening! Somehow, New Line Cinema thought a Dumb & Dumber prequel starring two unknowns (Eric Christian Olsen’s biggest role to date is probably as the bad guy in Not Another Teen Movie) and without even the pen or blessing of the Farrelly brothers would be a homerun. The company bet on the consistently underwhelming Jamie Kennedy to courier Son of the Mask, again without involvement of the original’s writer or director. And even at the dawn of Steve Carell’s stardom, it seems in retrospect like sheer lunacy to think that his one-note joke character from Bruce Almighty might sufficiently lead a sequel about the construction of an ark… or that any movie with the name “Evan” in the title, for that matter, would be at all marketable.

With Carrey no longer beheld to his rigid “no sequels” rule, we might be seeing more of this lackluster follies actually rope in the comic powerhouse to headline… but the reality of the situation is that Carrey films are no longer the box office draw that they used to be. The man hasn’t had a real hit since Bruce Almighty, the most recent of his film’s to get the non-Carrey sequel treatment.

Then again, the 11-year stretches between Dumb & Dumber and Dumb & Dumberer: When Harry Met Lloyd or between The Mask and Son of the Mask, or the 14-year hiatus between Ace Ventura: When Nature Calls and Ace Ventura Jr., or the 20-year span between Dumb & Dumber and Dumb & Dumber To tell us one thing: apparently, people still want to see the old Carrey stuff… with or without him, as far as the studios seem to think. Although I’m not advocating for a Cable Guy sequel or a Twoman Show or a Liar Liar Liar, maybe we can at least stick these inevitable sequels with the star who made them work in the first place. Or else just stop trying. It’s not really working out anyway.